After IAF terrorist assassination, Islamic Jihad says 'blood of martyrs not in vain'

Strike said to have hit Ahmed Za'anin who was responsible for rockets after Ariel Sharon's funeral, among others.

The Islamic Jihad's military wing said it would avenge the Israel Air Force strike Wednesday that killed a terrorist responsible for a series of rocket attacks on southern Israel.

The terrorist, Ahmed Za'anin was responsible for the rockets fired at the Sha'ar Hanegev Regional Council shortly after the completion of the funeral of former prime minister Ariel Sharon at the nearby Sycamore Ranch last week.

"The blood of martyrs will not be in vain, but a curse that chases the occupier everywhere," Ma'an quoted the group's military wing the al-Quds Brigades as saying.

Defense Minister Moshe Ya'alon in a statement Wednesday said that two terrorists were killed in the attack. The IDF spokesperson could not confirm that a second terrorist was killed. However a military source said that another individual was present with Za'anin at the time of the IAF strike.

Palestinian news agency Ma'an reported that a second individual, Mahmoud Za'anin was present during the strike and that he was also killed in the strike.

The air strike, carried out jointly by the IDF and Israel Security Agency (Shin Bet), targeted Za'anin of the Popular Front for the Liberation of Palestine (PFLP), who according to the IDF planned to carry out additional rocket attacks against Israel in the near future. 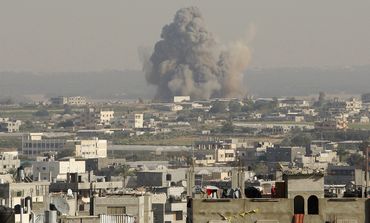 "The IDF acted to remove an immediate threat to Israeli civilians," the army said. "Ahmed Za'anin belonged to the PFLP terrorist organization, and in the past, was a member of the Palestinian Islamic Jihad terrorist organization. He carried out many destructive acts against Israeli civilians and the IDF, with an emphasis on rocket fire," the army added.  Since 2009, Za'anin took part in several attacks and set up local terrorist infrastructures in the Gaza Strip, according to the IDF.

"We will not hesitate to hurt those who threaten our security, and we will do this with all means and tools at our disposal. We see Hamas responsible for firing at Israel, and we will continue to fight back at Hamas and those engaged in terror." Ya'alon said.

Earlier, on Tuesday, Palestinian terrorists fired three projectiles at the Eshkol Regional council in the early hours of Tuesday morning. The projectiles slammed into open fields and failed to cause injuries or damages.

Hours before that, Palestinian terrorists detonated a bomb on the border between southern Gaza and Israel. IDF sources said the explosive was planted on the Gazan side of the fence, and was an attempt to kill soldiers.The attack did not cause injuries. "Palestinian terrorists are exploiting the area west of the border to attack soldiers and Israeli civilians," an army spokeswoman said. "The IDF takes a grave view of this."The IDF has been on high alert since a rocket barrage on Ashkelon on Thursday, which saw the Iron Dome air defense system intercept five projectiles over southern skies. Also on Tuesday, security sources observed Hamas attempts to end rocket fire and reign in smaller terrorist faction in the Strip.