By JPOST.COM STAFF, YAAKOV KATZ
AUGUST 6, 2012 04:39
Egypt's president-elect Mohamed Mursi 370 (R)
(photo credit: REUTERS / Handout)
Advertisement
Egyptian President Mohamed Morsy on Sunday night vowed revenge against the perpetrators of a raid on an Egyptian military base that killed 15 soldiers and wounded seven. The attackers also tried to strike Israeli targets in a cross-border raid, prompting Israeli officials to call for Egypt to restore order to the increasingly lawless Sinai Peninsula."This cowardly attack will not go without a response," Morsy said according to AFP. "Those who committed this crime will pay it dearly." The Egyptian president called an urgent meeting of Egypt's Supreme Council of the Armed Forces following the attack.Global jihad terrorists broke into an Egyptian military base on Sunday evening, opening fire on Egyptian soldiers. The terrorists also stole two armored jeeps and used them to initiate a cross-border attack into Israel.Hamas condemned the assault on Egyptian soldiers, calling it an "ugly crime" and adding the group's "deep condolences to the families of the victims and to the leadership and the people of Egypt."

Immediately following raid on the Egyptian base, the terrorists used the stolen vehicles to ram the Kerem Shalom crossing, which is shared by Israel, Egypt and the Gaza Strip. One of the vehicles, likely boobytrapped, exploded at the crossing. A number of terrorists succeeded in exiting the second vehicle before it was destroyed by an air strike. They crossed into Israel and engaged in a firefight with IDF troops.No one was injured in Israel, while six terrorists were killed in the gunfight. IDF sources said it was possible that the terrorists intended to abduct a soldier or to infiltrate a nearby community to attack residents. The sources also said the attackers were probably Beduin residents of Sinai who were part of a larger global jihad terror cell based in the peninsula.

Defense Minister Ehud Barak called on the new Egyptian government to immediately work to restore control over Sinai. “The modus operandi of the terrorists again highlights the need for determined Egyptian action to restore security and prevent terrorist activities in Sinai,” Barak said. The IDF said the attack was not connected to an Israeli air strike earlier in the day against a global jihad terror cell that was in the final stages of planning an attack against Israel and along the Egyptian border. The air strike killed one terrorist and seriously wounded another.During the attack near Kerem Shalom on Sunday night, the IDF ordered residents of communities in the Eshkol region to remain inside their homes, and shut down Road 232, which runs along the border. 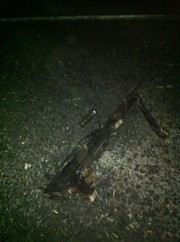 Large forces were deployed to the area and as of midnight, the IDF was conducting searches throughout the Eshkol region to confirm that no one had infiltrated nearby communities.Labor party leader Shelly Yechimovich touted the importance of security ties between Egypt and Israel following the attack. "Cooperation is critical in stopping the incessant efforts of global jihad terrorists that act against state sovereignty, civilians, and regional stability," she said.The target of the air strike earlier on Sunday was 22-year-old Ahmed Ismail, who the Shin Bet (Israel Security Agency) said was involved in the cross-border attack in June that killed a contractor from Haifa and was in the midst of planning an additional attack, set to be launched from Sinai soon.Security sources said it was possible the air force’s strike thwarted the terrorists’ attack. IDF Spokesman Brig.-Gen. Yoav Mordechai said they were in the “advanced and final stages of launching an attack on the Eilat- Egyptian border.”Prime Minister Binyamin Netanyahu issued a statement praising the IDF and the Shin Bet for the “precise operation” in Gaza.“All those who intend to harm us should know our long arm will reach them,” he said.Israel is increasingly concerned with the presence of global jihad operatives in the Sinai Peninsula and their ties with Palestinian terrorists in the Gaza Strip. Military sources added that global jihad elements were taking advantage of regional instability, in particular in Egypt and Syria, to create infrastructure that can be used to attack Israel.According to the IDF, the global jihad terror cells consist of Palestinians from the Gaza Strip as well as operatives from Arab countries throughout the Middle East. Some of the terrorists involved in the June attack are also believed to have fought in Libya during the uprising there last year.Last week, the Counter-Terrorism Bureau urged Israeli tourists to immediately leave Sinai and return to Israel due to intelligence information that terrorists plan to abduct Israelis in the peninsula.Reuters contributed to this report
Advertisement
Subscribe for our daily newsletter