John Hickenlooper is the latest Democrat who thinks he can win back the White House in 2020. 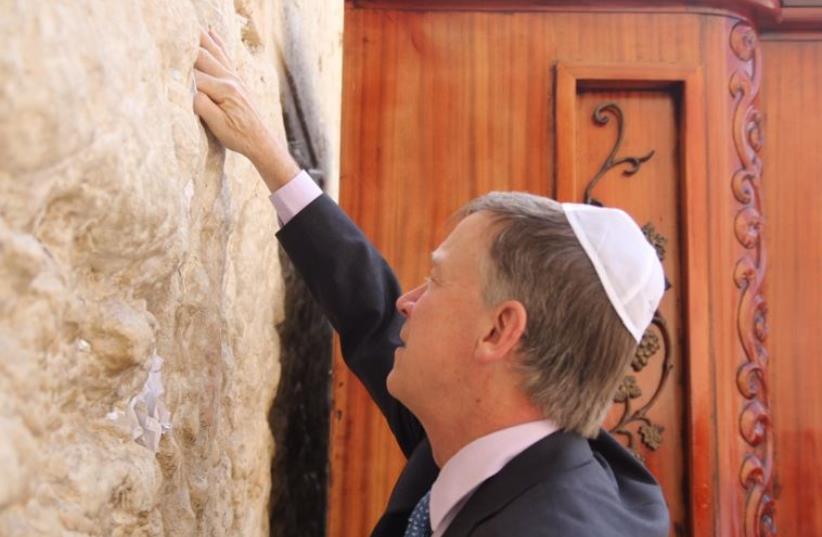 John Hickenlooper is the latest Democrat who thinks he can win back the White House in 2020. The former Colorado governor and self-described “extreme moderate” announced his candidacy on Monday and is holding his first campaign rally this week.

“Ultimately I’m running for president because I believe that not only can I beat Donald Trump, but that I am the person that can bring people together on the other side and actually get stuff done,” he said on “Good Morning America.”

During his political tenure as governor of Colorado and mayor of Denver, Hickenlooper, a Quaker, built strong ties with the Jewish community and Israel. He also managed to learn some Yiddish along the way. JTA rounded up some of the highlights from his Jewish record.

Visiting Israel for the first time had a deep impact.

In 2013, Hickenlooper made the trip with Larry Mizel, a prominent Jewish Colorado businessman. In Israel, he had a nearly hourlong meeting with Prime Minister Benjamin Netanyahu and a three-hour dinner with former prime minister Ehud Olmert. He also did the typical tourist things: He “bobbed around like a cork in the Dead Sea,” visited Masada, rode a camel and touched the Western Wall.

Israel wowed Hickenlooper, who has consistently expressed support for the country and has spoken at the American Israel Public Affairs Committee’s annual conference. He called his visit “the most remarkable seven-day trip of my life, without question.”

In an interview about the trip with the Colorado Statesman, Hickenlooper couldn’t stop raving about Israel.

Hickenlooper was particularly amazed by the trees planted by the Jewish National Fund (he even got to plant one of his own), a topic he returned to several times in the interview, and Israel’s agricultural system.

“Anyway, to see the incredible innovations in agriculture and the efficient use of water, I mean … I always for some reason thought it was so desertlike that they were importing most of their food,” he said. “My gosh, what an amazing agricultural system it is.”

He also was deeply moved by a visit to Yad Vashem, calling the national Holocaust memorial “the most transformative museum experience I’ve ever had in my life.”

In 2016, Hickenlooper signed a bipartisan bill requiring the state’s retirement program to divest from companies that boycott Israel.

He thinks Colorado and Israel are natural partners — in the cannabis industry.

In 2015, two years after that initial Israel visit, Hickenlooper led a trip there to encourage business ties between the country and his state, notably in the recreational and medical marijuana industry.

“You guys have some of the top resources in the world on some of these effects, and we have resource money now, so we are looking for partners,” he told The Jerusalem Post at the time.

Hickenlooper, who initially opposed decriminalizing recreational marijuana, told the Post he had come around.

The trip wasn’t just about cannabis. His delegation also worked to improve ties between Colorado and Israel in other fields such as agriculture and cyber security.

He is close with a Jewish Republican businessman.

Mizel, a businessman and Republican donor, has been described as a “close friend” of the Democratic presidential hopeful. Mizel organized Hickenlooper’s 2013 trip to Israel and the lawmaker has traveled on a plane owned by Mizel’s company, MDC holdings, on at least one occasion. In 2007, the real estate developer honored Hickenlooper with a community enrichment award given through the Mizel Institute.

Mizel has been described as “a go-to person for Republicans looking to understand Israel and demonstrate their support for it.” He serves on the board of the Republican Jewish Coalition and plans trips for Republican political hopefuls, including arranging meetings with Israeli leaders, In 2016, Mizel helped organize a fundraiser for then-presidential candidate Donald Trump, for which attendees paid up to $25,000.

Mizel declined a request for comment by the Jewish Telegraphic Agency on the pair’s relationship and how they navigate their obvious political differences.

He seems to have a favorite Yiddish word.

Hickenlooper used Yiddish to make a point about unity in Colorado when he was inaugurated as governor in 2011.

“There’s a Yiddish word, ‘landsman,’ which roughly translated means ‘a fellow villager’ – a stranger, perhaps, but still someone you welcome because you know they share a common connection in the village of your ancestors,”

“I think we can learn from this Yiddish expression and the warmth it evokes. This value doesn’t spring from government. But it can teach all of us to govern together. I feel that every Coloradan is a member of our administration.”

It turns out that he learned the word at a Jewish event he attended the previous year, when Mizel introduced the then-mayor of Denver as “an honorary landsman,” the Intermountain Jewish News reported.

The word seems to have stuck with Hickenlooper. On a visit to a local Chabad house in 2017, he used landsman again to talk about unity in Colorado, according to Col Live.

Hickenlooper built ties with Colorado Jews by attending Jewish events, including  by the local federation’s  a Hanukkah menorah lighting and a Holocaust remembrance hosted by the Anti-Defamation League. In October, he participated in a vigil at Temple Emanuel, a Reform synagogue in Denver, to honor the 11 victims of the shooting at Pittsburgh’s Tree of Life synagogue.

“We are a nation built on freedoms, and our most sacred freedom is the freedom of worship,” Hickenlooper said at the vigil. “It’s come to the point where that which is valued the most is most at risk.”