Airplane like those used for covert Iraqi aliya arrives in Israel

Destined for Atlit, an old C-46 is seen as educational tool. 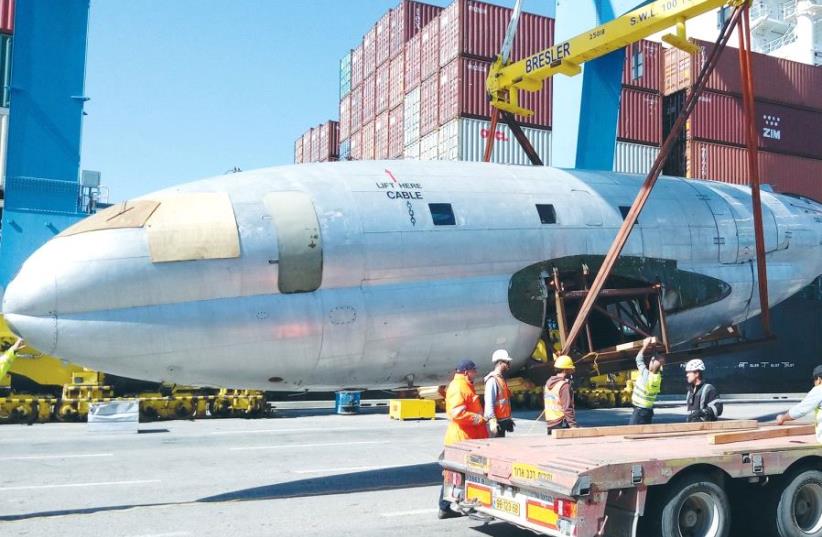 THE FUSELAGE of a C-46 similar to those that brought Iraqi Jews to British Mandate Palestine
(photo credit: YORAM DORI)
Advertisement
A C46 airplane, the model used in the illegal aliya operation that brought thousands of Jews to British Mandate Palestine from Iraq in 1947, is being restored after arriving in Haifa this week thanks to the Society for Preservation of Israel Heritage Sites, with the support of JNF USA.“Now, after so many years we managed to find the kind of plane that was used,” the leader of the covert Mossad operation, “Michaelberg,” former Aliya Bet agent Shlomo Hillel, told The Jerusalem Post on Wednesday. “After trying so hard, we found it in Alaska of all places.“Michaelberg,” according to Hillel, was the first operation to bring Jewish immigrants to British Mandate Palestine illegally, via air.Following its restoration, the aircraft will be brought to the national site where the Atlit Detention Camp once stood, which now serves a museum of the history of clandestine immigration. It will stand beside the Galina ship, which was brought from Latvia to help tell the story of immigration by sea.“If you want to tell the story it’s not enough... people need to see something,” said Hillel. “We want to tell the story that one of the most important things in our struggle for the creation of the state of Israel was to save those who were persecuted in their countries – we know the story about the Jews and the Holocaust in Europe, but people do not realize what was happening to the Jews in the Arab lands... just imagine what could have happened to the Jewish communities in Iraq, Syria or in Yemen if they would not have taken the Jews out in time,” said Hillel, who himself immigrated to Mandate Palestine in 1934.The effort is part of the Society for Preservation of Israel Heritage Sites project to increase exposure of the aliya of Jews from Muslim countries and convey to visitors to the site that one of the most important things that happened in the creation of the state of Israel was the rescue of Jews who had nowhere to go.Hillel believes the new addition to the Atlit museum will be an important educational tool.“Learning about Israel is not just showing them [tourists] Tel Aviv and the cafes and restaurants; we want to tell them about our story, about our struggle for the creation of the only Jewish state, which has become a haven for Jews from all over,” he said.The rescue operations were complicated and dangerous; “Michaelberg” was carried out under the noses of the Iraqi authorities, and landed in Palestine in violation of British White Paper restrictions.“The people who came were very, very excited. Flying about four hours from Iraq to Palestine was something like a miracle in those days,” Hillel recalled, saying that, in those days he was too busy to truly rejoice.But, Hillel said, when he witnessed the arrival of the C46 aircraft on Tuesday, it was different. “I think it was the first time that I was really very excited to remember,” he said.