By DAVID BRUMMER
JUNE 10, 2018 14:06
AJC President Jacob Blaustein (left) meets with Israeli Prime Minister David Ben-Gurion
(photo credit: Courtesy)
Advertisement
The American Jewish Committee was established long before the State of Israel was declared. In fact, its first meeting in 1906 was held within a decade of the First Zionist Congress in 1897. And these two institutions, one American and one European, were responding to acutely similar stimuli – namely, European antisemitism.
In his work as a journalist, Theodor Herzl had covered the Dreyfus Affair and was subsequently convinced that the only way to negate the increasing incidence of antisemitism was to return Jews to their historical homeland. The antisemitic catalyst for AJC was a murderous pogrom in the Russian city of Kishinev in 1905 – of which Haim Nahman Bialik wrote his famous poem “The City of Slaughter.” The violence pushed Cyrus Adler, Jacob Schiff, Mayer Sulzberger, Louis Marshall and other prominent American Jewish leaders to advocate for the defense of Jews everywhere.
That central tenet of helping Jews wherever they may be – including Israel – has been a guiding principle of AJC since its inception. In the 1930s and 1940s, AJC attempted to alert the wider world to, first, the murderous rhetoric of the Nazi regime, and then its attempt to annihilate the Jewish people. In the immediate postwar period, AJC pressured the British government to allow 100,000 Jewish refugees into Mandate Palestine, and in 1948 backed the creation of the State of Israel.
By the 1950s, the nascent state had won a costly independence, and, under Prime Minister David Ben-Gurion’s astute tutelage, was attempting to forge its path forward as one of the world’s newest nations. AJC President Jacob Blaustein was immeasurably helpful, using his access to President Harry Truman and other world leaders to help secure American aid for Israel; strengthen Israel’s relations with the US State Department (which had initially tried to do as little as practicable to help the fledgling Israeli state); arrange the payment of German reparations to Israel; and safeguard the emigration of Iraqi Jews there. In 1951, at a time of impassioned ideological debate about where the center of world Jewry lay, Blaustein met with the Israeli prime minister and secured the Blaustein–Ben-Gurion agreement, which affirmed the bond between American Jewry and Israel and assured the integrity of each community.
After the Suez Crisis of 1956, when Israel, in cooperation with France and Great Britain, which had their own agendas, invaded the Sinai Peninsula to put a stop to cross-border infiltration, Blaustein’s connections proved invaluable. As Abba Eban remarked in an oral history interview: “In moments of crisis, as in 1956… his [Jacob Blaustein’s] contacts were extremely useful in helping to bring us together again on such matters as free passage in the Straits of Tiran, of seeing that free passage was exercised in 1957.”
AJC’s growing closeness with the State of Israel was deepened in 1962 when it became the first American Jewish organization to open a full-time office in Israel. The office worked (and still does) to strengthen US-Israel relations and build bonds between American Jews and Israelis.
That bond was severely tested only five years later, when Israel faced off against three of its Arab neighbors – Egypt, Jordan and Syria – plus Iraq. In the prelude to the Six-Day War, as the Arab media called for the liquidation of the Jewish state, Israel was seemingly abandoned by then-US President Lyndon B. Johnson, who was clearly preoccupied with the conduct of the Vietnam War. After war broke out, AJC President Morris B. Abram addressed the National Emergency Leadership Conference for Israel at Lafayette Park, in Washington, DC, on June 8, 1967. Abram eloquently called on the US government to bring about “the conclusion of binding treaties to guarantee permanent peace in the Middle East.”
There was hope that Israel’s stunning six-day victory over its Arab enemies – and the great expansion of its territory – would demonstrate the futility of taking military action against it. However, Arab humiliation and intransigence grew, with Israel falsely portrayed as the aggressor in that war and its conquest of land smacking of imperialism. The Arab powers, gathered in Khartoum, pledged never to recognize or make peace with Israel.
In 1970, AJC was at the forefront of the battle against the Arab economic war against Israel, spearheading a successful campaign in the US for the passage of landmark anti-boycott legislation. Its fight against the isolation and delegitimization of Israel continued, following the infamous 1975 UN resolution declaring that “Zionism is racism.” AJC was the first Jewish organization to launch a campaign to repeal it, which AJC sustained until victory in 1991.
That year was important for another reason as well. The year before, Iraqi leader Saddam Hussein, who had previously won Western support for his willingness to take on the Islamic Republic of Iran, overplayed his hand and invaded Iraq’s tiny but oil-rich neighbor, Kuwait. In response to a coalition air strike in Iraq, the Iraqi Baathist leader fired approximately three dozen Scud missiles at Israel. Tourism to Israel had virtually ceased because of the threat of attack, but 125 AJC leaders spent a week in Israel in December 1990 as part of Operation Undaunted. Then, in January 1991, as the first Scud missiles from Iraq landed in Israel, AJC CEO David Harris led a first-of-its-kind solidarity mission to Israel, affirming support, followed by a 150-member AJC group that visited Israel immediately following the Gulf War. Again, in 2006, as Hezbollah fired missiles at Israel’s northern cities, AJC organized the first solidarity mission to travel to Israel, to provide medical assistance and donate to blood banks.
Despite the immediate threat of missiles abating, Arab countries were still attempting to encourage an ever-wider boycott of the Jewish state. In 1992, Japan ended its compliance with the Arab boycott of Israel, attributing its policy change directly to AJC’s five years of diplomatic effort. 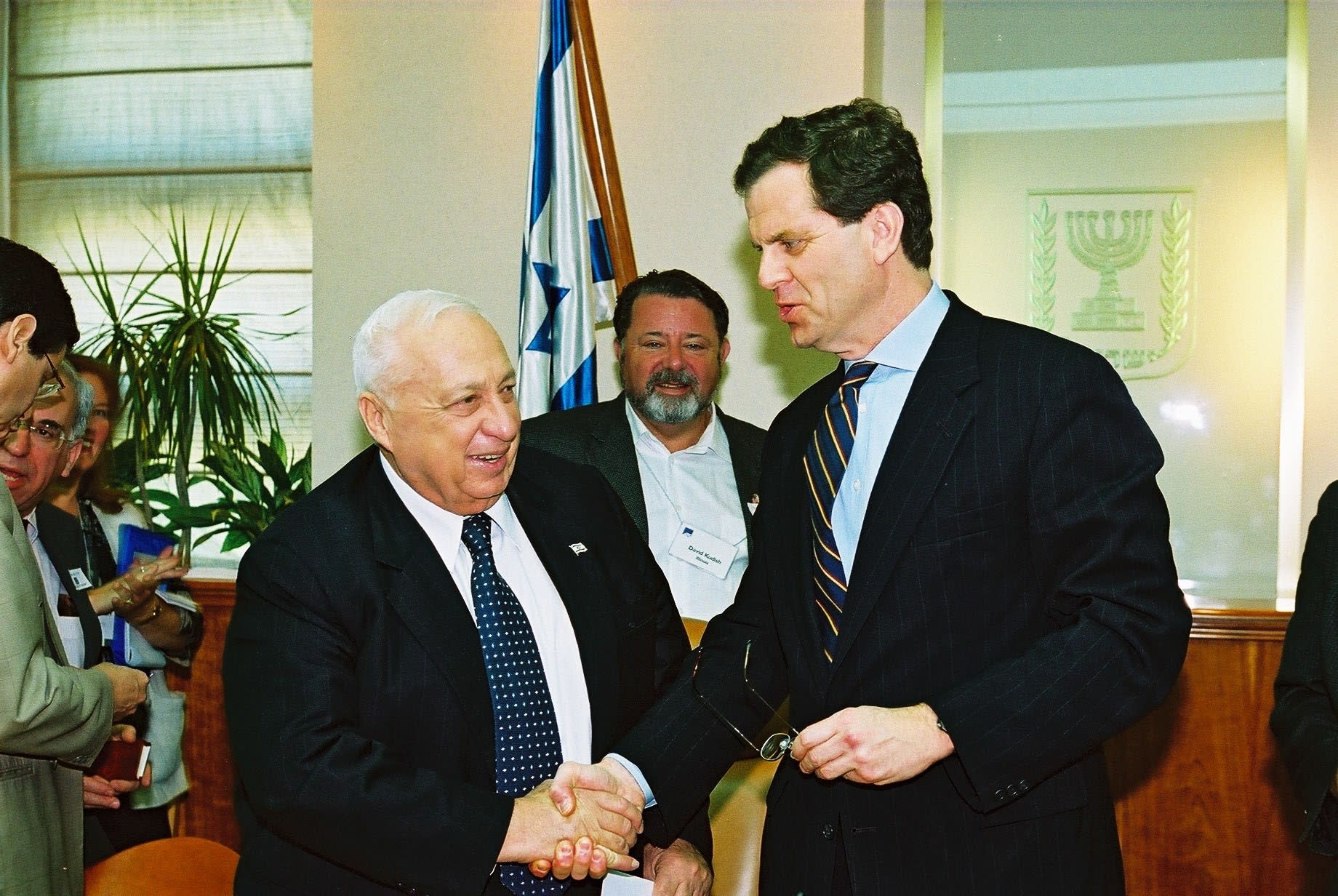 AJC CEO David Harris shakes hands with Ariel Sharon
With the onset of the new millennium, AJC has intensified its Israel advocacy, using the organization’s close and long-standing contacts with foreign diplomats and world leaders to aid the Jewish state’s efforts to achieve peace and security.
To take just one example, even though Israel has been a member state of the UN since 1949, it remained the only member ineligible to serve on its all-important Security Council. Candidates for the council are proposed by UN regional groups, and Arab and Muslim nations in Israel’s geographical region barred the Jewish state from admission. For seven years, AJC carried on a diplomatic and media campaign against this blatant discrimination, until Israel was finally admitted into the UN’s Western European and Others Group. Israel’s UN ambassador at the time, Dr. Dore Gold, declared that in enabling Israel to vie for a seat at the Security Council, “AJC changed history.”
AJC has also immeasurably helped Israel by opening the eyes of important figures in many fields – politics, business, academia, religion, and more – to the real Israel through weeklong seminars. Already, more than 6,000 influentials have been able to experience Israel firsthand through AJC’s Project Interchange, appreciate its accomplishments and understand its challenges. Participants return home with a far more objective take on Israel, often take public stands in support of Israel, and in some cases develop collaborative projects with Israelis through contacts established on the AJC trip.
AJC has been with Israel every step of the way and will continue to be there. Fittingly, AJC is marking this year, Israel’s 70th anniversary, by holding its Global Forum in Jerusalem, the first time in the organization’s 112-year history that the event is taking place outside the US.