"Europe has to be a better home for its Jewish citizens," Martin Schultz, president of the European Parliament, stated. 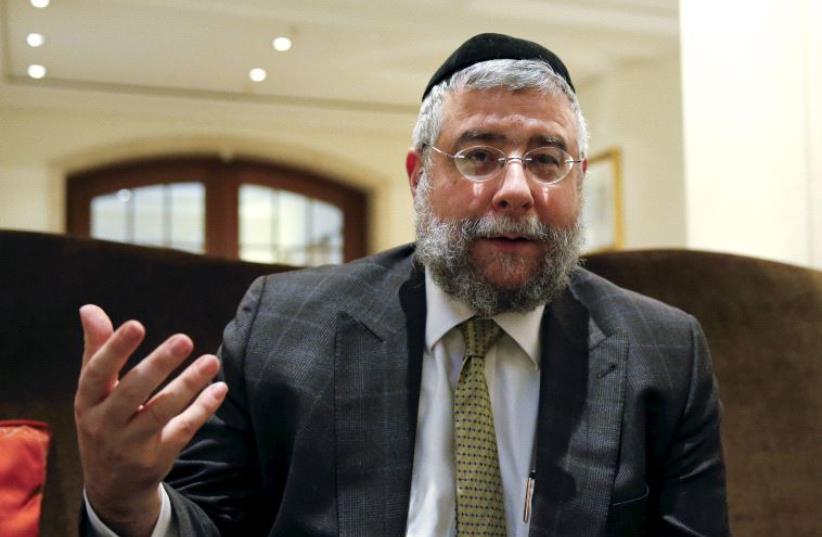 Rabbi Pinchas Goldschmidt.
(photo credit: REUTERS)
Advertisement
The situation of Jews in Europe today is like a person standing on train tracks while two trains approach on a collision path, Pinchas Goldschmidt, Chief Rabbi of Moscow, told European Parliament. Goldschmidt explained that "one train is radical Islam and Islamic terrorism... the other train is the antisemitism of old Europe, the extreme right."He told Parliament that both are existential threats and are the cause of "tens of thousands of Jews leaving France, Belgium and other European countries."This has resulted in a high percentage of people afraid to go to Jewish events and synagogue on holidays, he added.Speaking with The Independent, Goldschmidt stated that antisemitism in Europe is so rampant that "40 per cent of 1,200 Jews surveyed in France said they avoided wearing symbols that identified them as Jews for fear of antisemitic attacks."The Chief Rabbi called on Parliament to create an anti-terrorist task force to combat Islamic terror. “Radical Islam will not win the war against Europe by virtue of its strength, but only because of the weakness of the European Union.”He also condemned attempts by right-wing political parties to ban the Jewish practices of circumcision and the preparation of kosher meat in numerous European countries. “We will continue to unmask those bigots and anti-Semites, who want to fight Judaism under the political-correct flag of ‘rights of children’ and ‘rights of animals’.”Martin Schultz, president of the European Parliament, stated that "when we see that the Jewish population in Europe has decreased from almost four million in 1945 to barely more than one million today, then we know that it is high time not only to make a clear political statement, but to take effective action as soon as possible.""Europe has to be a better home for its Jewish citizens."