Anti-Israel graffiti was spray-painted on a Buenos Aires subway station located in a heavily Jewish neighborhood. 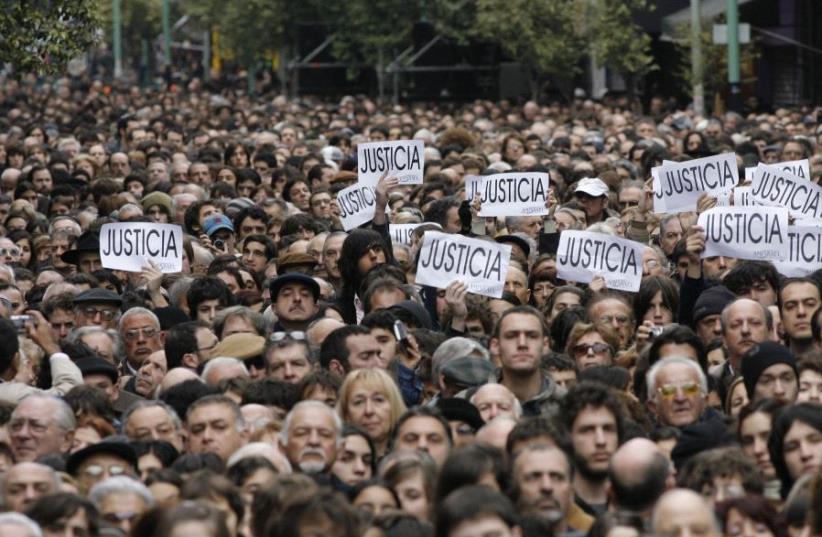 Hundreds of people, most of them members of the Argentine Jewish community, attend the commemoration of the 13th anniversary of the 1994 bombing of the AMIA Jewish community center in Buenos Aires July 18, 2007. The signs read, "Justice.
(photo credit: REUTERS)
Advertisement

The subway station that was vandalized on Monday is located about 200 yards from the AMIA Jewish community center, where terrorists in 1994 set off explosives that killed 85 people and injured hundreds. The station “Pasteur” was renamed four years ago to “Pasteur-AMIA” and features a tribute to the AMIA bombing victims.

The phrase “Israel genocide” was spray-painted in two places in the station, including on one of the walls commemorating the attack that showcases a remembrance mural. The station’s display includes drawings, paintings and photos by 25 artists and a clock that is set permanently to  the exact moment of the explosion: 9:53 a.m. on July 18, 1994.

The Argentinean Zionist Organization in a statement called on the Buenos Aires city government to clean and restore the display and to “apply the law on those responsible once identified.”

Argentina has had an anti-discrimination law on the books since 1988.

The graffiti appeared two weeks after nine gravestones were vandalized at a Jewish cemetery in the northwest of the country.

Also two weeks ago, Argentina’s chief rabbi, Gabriel Davidovich, was attacked in a case that was initially believed to be motivated by anti-Semitism, but now is believed to be a revenge attack by a Jewish community member angry about a Jewish divorce, or get, authorized by the rabbi.