"The neo-Nazi threat is growing," Guterres told the audience, which included Holocaust survivors. "Some still seek to deny or diminish the fact of the Holocaust." 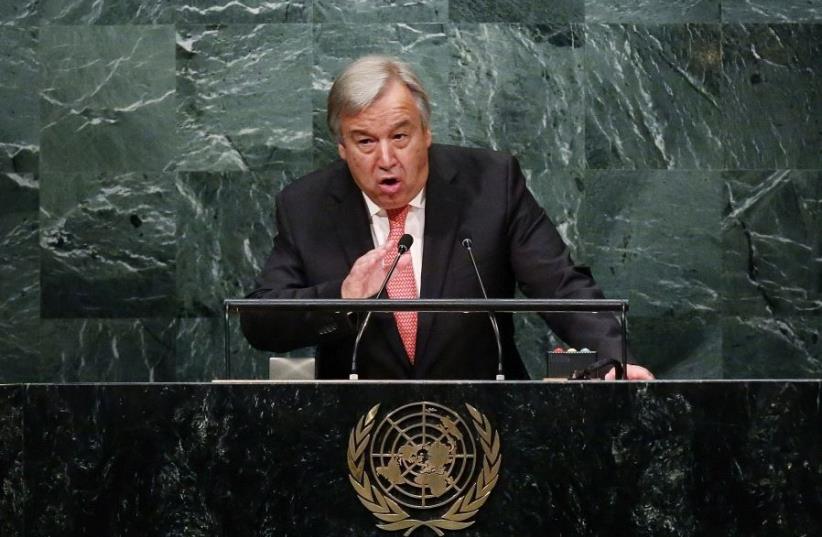 United Nations Secretary-General Antonio Guterres‏
(photo credit: REUTERS)
Advertisement
Speaking at the Park East Synagogue in New York City on Saturday, United Nations Secretary-General Antonio Guterres warned against rising antisemitism and discrimination, saying that the world must "stand together against the normalization of hate."Guterres spoke about the recent appearance of neo-Nazi groups and the violence they have espoused. "They are less crude and more dangerous," he said, adding that oftentimes, groups have tried to rebrand themselves so as to appear more gentle towards Jews. White supremacist groups, for example, often tout their main cause as reaffirming "white culture" and "white pride," but in doing so, vilify other ethnic groups, including Jews. "The neo-Nazi threat is growing," he told the audience, which included Holocaust survivors. "Some still seek to deny or diminish the fact of the Holocaust." Guterres added that now more than ever, organizations are using social media to monitor groups that espouse hate.The UN chief posted snippets of his remarks on Twitter, as well, writing that "Hate is on the rise. Nazi symbols, mindsets and language are back."

Hate is on the rise. Nazi symbols, mindsets and language are back. Today at Park East Synagogue, I met Holocaust survivors and called for vigilance against anti-Semitism and discrimination of all kinds.

Despite his commnts, antisemitism was not among Guterres' list of his top global concerns for the year, which included valiant causes such as funding justice for Rohingya Muslims and bringing and end - or a ceasefire - to the war in Yemen.