After the previous leaders resigned over allegations of antisemitism, one of the new board members goes against Israel on Twitter 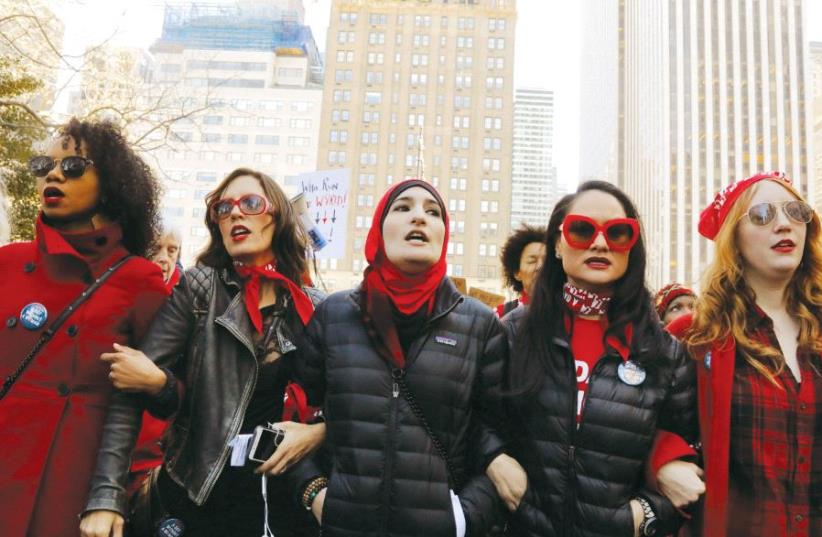 Linda Sarsour (center) leads during a ‘Day Without a Woman’ march on International Women’s Day in New York, earlier this month
(photo credit: REUTERS)
Advertisement
Three of the founding and most prominent board members of the Women’s March stepped down from their positions, the organization announced Monday.But that was not the only shakeup for the group — 17 new board members have been appointed.One of them, Zahra Billoo, a lawyer who serves as executive director of the San Francisco Bay Area office of the Council on American-Islamic Relations, has repeatedly made comments sharply critical of Israel.On Twitter, Billoo has said several times that Israel engages in war crimes and terrorism, and that it is an “apartheid, racist state.”

Israel commits war crimes and terrorism as a hobby.

The three women who resigned in July — Linda Sarsour, Tamika Mallory and Bob Bland — along with co-chair Carmen Perez, had been at the center of a controversy over allegations that they failed to condemn and in some cases fostered anti-Semitism in the movement. Perez remains on the board)In one tweet from 2015, Billoo wrote that she was “more afraid of racist Zionists who support Apartheid Israel than of the mentally ill young people the #FBI recruits to join ISIS.”Last year she tweeted that her comments on Israel led to an interfaith group withdrawing an award it was set to give her. In a series of tweets, Billoo wrote the unnamed organization told her “that pressure opposing my award was mounting. The organization’s institutional funding was being threatened and their Jewish members were threatening to leave.”But Billoo also has ties to the Jewish community. In 2015, she wrote an article in the Huffington Post about her decision to speak at a conference organized by the American Jewish Committee that said while her views on Israel differed from those of some in attendance, she also shared many of their goals on other issues.“Some of us may disagree on politics in the Middle East, but there is no disagreement that the rise of Islamophobia and anti-Semitism in the U.S. is, in its simplest form, the growth of hate against faith, and both our communities are impacted,” Billoo wrote.The anti-Semitism accusations against the Women’s March date back to Mallory’s ties to and refusal to disavow Nation of Islam leader Louis Farrakhan, who has a long history of making anti-Semitic comments. An article in Tablet last year also alleged that Mallory and Perez made anti-Jewish comments at Women’s March planning meetings.Sarsour, who is Palestinian American, has also made statements implying feminism and Zionism are incompatible.