At the time of his death, Reitman was in pre-production on a number of other films, including “Triplets,” a sequel to his 1988 comedy “Twins.”

Ivan Reitman, a Hollywood director and producer who was born in Czechoslovakia and went on to helm “Ghostbusters” and other beloved American blockbuster comedies, died Saturday at 75. Reitman died in his sleep at his home in Montecito, California, according to the Associated Press.

Reitman’s first major commercial success came in 1978 when he produced “National Lampoon’s Animal House,” but his most famous work was “Ghostbusters,” the paranormal comedy he directed and which was released to widespread acclaim in 1984. In a career spanning some 50 years, Reitman worked with with some of the most beloved comedic actors of his generation, including Dan Aykroyd, Robin Williams, Danny DeVito, Billy Crystal, and Bill Murray, and set the stage for the landscape of movie comedies to follow.

“There are three generations,” Harold Ramis, one of the original stars of “Ghostbusters,” told the Forward in 2007, speaking about the world of comedy to which Reitman belonged. “That makes me the grandfather and Judd [Apatow] the dad. [Michael] Cera, [Seth] Rogen and [Jonah] Hill are the current generation. Ivan is a part of the grandfather generation.”

Born in 1946 in to Jewish parents who survived the Holocaust — his mother having survived Auschwitz, his father having escaped a concentration camp and later fought as a member of the Slovakian resistance — in Komárno, Czechoslovakia, Reitman was four years old when the family left the country. The family made their escape after the communist Czech government began threatening Reitman’s father, a factory owner. The family escaped hidden in a coal barge that made its way from Komarno to Vienna on the Danube, and eventually made their way to Toronto in 1950.

“I remember flashes of scenes. Later they told me about how they gave me a couple of sleeping pills so I wouldn’t make any noise. I was so knocked out that I slept with my eyes open. My parents were afraid I was dead,” Reitman told the Associated Press in 1979. 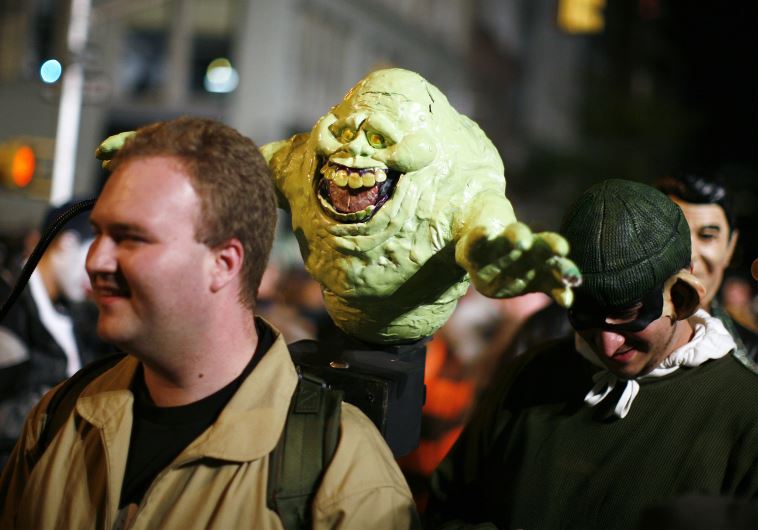 A participant dressed as a character from the show ''Ghostbusters'' takes part in the annual Greenwich Village Halloween Parade in New York (credit: REUTERS)

In Toronto, Reitman displayed an interest in performance from an early age and studied music and drama at McMaster University. His first film, a low-budget film called “Cannibal Girls,” was released in 1973. His big break came in 1978 with “National Lampoon’s Animal House,” which he produced, followed by the summer-camp comedy “Meatballs” in 1979 starring Bill Murray, for which he had moved over to the director’s chair.

“Ghostbusters” in 1984 was where Reitman left his biggest cultural footprint: a unique fusion of smart-aleck comedy and big-budget paranormal special effects that connected with audiences around the globe. It spawned a franchise of films, TV shows and video games that remains popular to this day.

His other big hits included “Stripes,” a 1981 military comedy soon to be rebooted as a TV series; “Dave,” a 1993 political fable starring Kevin Kline as an ordinary guy who is a doppelgänger for the U.S. president; and the 2011 rom-com “No Strings Attached,” starring Natalie Portman and Ashton Kutcher.

“I love to tell good stories and make people laugh,” Reitman told the Forward in 2007. “I seem to do it okay.”

Reitman married Genevieve Robert, who converted to Judaism, in 1976, and the couple had three children. Their son Jason Reitman followed his father into directing. Father and son worked together on some films, including the 2009 Oscar-nominated film “Up in the Air,” which was written and directed by Jason Reitman and produced by Ivan Reitman. Last fall, the two teamed up again for the latest “Ghostbusters” installment, with Jason directing and Ivan producing “Ghostbusters: Afterlife,” a film that functioned as a tribute to the father’s beloved original.

At the time of his death, Reitman was in pre-production on a number of other films, including “Triplets,” a sequel to his 1988 comedy “Twins” about genetically engineered twins played by DeVito and Arnold Schwarzenegger.

Reitman was proud of his son’s accomplishments and tended to tear up when talking about them. He had even encouraged his son to drop out of medical school in favor of a career in Hollywood, a move that evidently paid off.

“I said: ‘But Dad, I’ll either succeed in your shadow or fail in a spotlight,” Jason Reitman told the Guardian in a joint interview with his father in Nov. 2021. “And he said: ‘Being scared is not a reason not to do something.'”