How did the sinking of the Titanic impact US Jews?

By DAVID GEFFEN
THE ‘TITANIC,’ 1912, prior to the calamity.
(photo credit: PICRYL)
Advertisement

A partial lunar eclipse occurred during Passover, April 1 to 9, 1912, in England. The preparations for the launching of the Titanic were going full speed ahead for its maiden voyage, to begin on April 12. The noted American Jews Isidor Straus and Benjamin Guggenheim were preparing to return to the US on the ship.

This report was found in the files. “The Hebrew steerage passengers were looked after by a Hebrew who is employed by the company as a cook, and is at the same time appointed by rabbi as guardian of such passengers. Orthodox Jews knew that a kosher kitchen had been arranged for them.”

The extremely well-made movie Titanic provides a fictional but still real account of the brief voyage and the rescue efforts. Ida and Isidor Straus are the giant heroes. In the wake of tragedy, the streets of New York were filled with the Yiddish troubadours singing away.

“Good people have you heard about the terrible accident? An American ship has tipped over. How many people has the tragedy engulfed?

“Good people can you imagine the scene? How great was the fury, how in an instant water flooded the engine, and the electricity was extinguished. 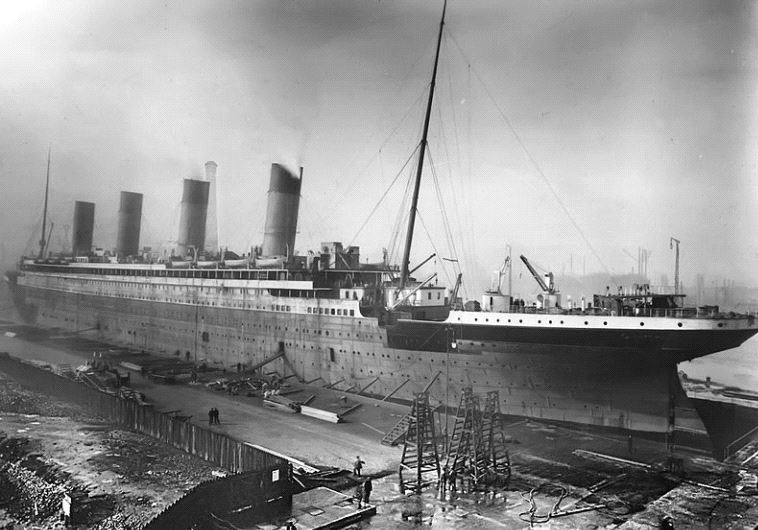 The RMS Titanic at dock before its fateful maiden voyage (credit: Wikimedia Commons)

“The captain stood on high. He took note of the miserable frenzy: how the ship began sinking. One blow and a long bang, and it was bashed.”

My knowledge of the Titanic, when I grew up in the ’40s and ’50s, was minimal. However, I did have a meeting with a survivor in Norfolk, Virginia, where my mother lived before she was married. One summer I was introduced to a man in his forties, Mr. Aks, a close family friend. He was one of the babies who survived. He was taken from his mother’s arms as the ship began to carry its passengers underwater.

Aks was caught by a woman in a lifeboat whose name was Mrs. John Jacob Astor. She wrapped him in a blanket since he was only eight months old. Later he was returned to his mother, who did survive. He kept that blanket as a good luck charm and spent his life in Norfolk.

Striking headlines 110 years ago, of the ship’s demise on April 14-15: “The great new ship Titanic has some problems in the Atlantic: Everyone safe.” The second editions that day and in all the papers next day carried the horrible news that 1,300 passengers had been lost. The news became tragic as survivors interviewed. “A Titanic Forbes-listing” continually pointed out the rich who had drowned. After John Jacob Astor came Guggenheim, a copper baron and scion of a noted American Jewish family.

The only other Jew among the seven wealthiest was Isidor Straus, a “50-million man,” whom we recall from the movie. How we were touched because his wife, Ida, refused to enter a lifeboat and perished with her husband!

In Palestine, a brother, Nathan Straus, after whom Netanya was named, was with Judah Magnes to see current conditions in the land. Henrietta Szold had begun Hadassah in New York the previous month, and unbeknown to Nathan Straus, she had plans for him.

Two Straus brothers were traveling. Judah Magnes had taken Nathan Straus and his wife to Eretz Yisrael. Isidor traveled in Europe, while his brother was directed through Palestine.

By the end of the first week following the catastrophe, The New York Times began reporting memorial services at Temple Emanu-El and Temple Beth-El in the city. Those most publicly mourned were Guggenheim and Straus. A hundred synagogues, probably more, throughout the United States held such services for the “big two.” In addition, communities mourned the deaths of their local residents.

WE MENTIONED the street songs in Yiddish, but those were followed by music of a more dramatic nature.

The best-known American Orthodox Jew of the second decade of the 20th century was Cantor Yossele Rosenblatt. He acted instinctively with the great heart he had. For RCA Victor Records, he cut an “El Malei Rahamim” [“Prayer of Mercy” for the soul of the departed] for the unfortunate ones who were gone. We listen, 110 years later, to Rosenblatt’s moving melodic musical interpretation. For his rendition of the prayer, he included in Hebrew something new for that period – “for the people of the Titanic who drowned in the sea and are gone to their eternal home.”

The recording sold quickly – $150,000 was raised, because Rosenblatt donated all the rights. These funds, a very large sum, were contributed to the general fund for families who lost loved ones on the ship. One Yiddish paper wrote, “The sinking of the Titanic was a tragedy that left no heart untouched.”

In Jerusalem, Rabbi Chaim Berlin, the chief rabbi of Jerusalem, conducted a moving memorial service for Ida and Isador, held on April 23 at the Hurva Synagogue. A few days later, April 28, a “high tribute” was paid to Ida Straus at the Technikum in Haifa.

At the Yankees/Giants game on April 22, the proceeds went to benefit and help surviving families.

AS IDA STRAUS’S selfless act of love and devotion – choosing to remain on the doomed ship together with her husband – became better known, both Christians and Jews praised her to the sky. She was a true woman of valor who followed the words of Ruth to Naomi, “Where you die, I will die.”

Everyone knew the Strauses were noted Jewish philanthropists. The love of the two for each other was absolutely incredible.

Then another fascinating step was taken, besides what Rosenblatt had done initially.

A New York Yiddish lyricist, Solomon Small, 1868-1943, penned an immortal song titled “Der Naser Kever” (The Watery Grave). Again, Rosenblatt came to the fore. He recorded the song, and the sheet music was published with a moving illustration.

On the cover, one sees a drawing of the stricken ship. Floating above it are the spirits of the personages of Ida and Isidor Straus. An angel can be seen placing a wreath on the heads of the loving couple, who are joined in an embrace.

“Standing there... are the thousands who know that their death will dash them forever. They cry out.

“Save yourselves... into the boats quickly women take a place there.” Then the song focuses on Ida. “But listen to that woman’s soul... I won’t stir from the spot. I will die here with my husband.

“Let small and great honor the name of Ida Straus.”

A noted rabbi in Atlanta, Joseph Levine, following his distinguished service, left his congregation in 1913. A few years later he published a book in Hebrew with sermons, prayers and articles.

On the Shabbat after the Titanic went down, Levine gave a moving sermon in Yiddish, which, subsequently, he translated into Hebrew. Let me quote his words.

“The sinking of the Titanic is an event of great importance to the American Jewish community.

“These words are just the tip of the proverbial iceberg which took the Titanic down to the depths.”

Levine concluded his sermon with these memorable thoughts.

“We have wept for all of the victims of the Titanic together. Now we must interweave into our own lives that moving devotion of Ida for Isidor. Only then will we demonstrate what these two and all those who rest in the watery depths mean to us. May their souls be bound up in the bonds of life eternal.” ■