Author Lawrence Wright had previously written a book about the Camp David negotiations in 2014 titled Thirteen Days in September: Carter, Begin and Sadat at Camp David. 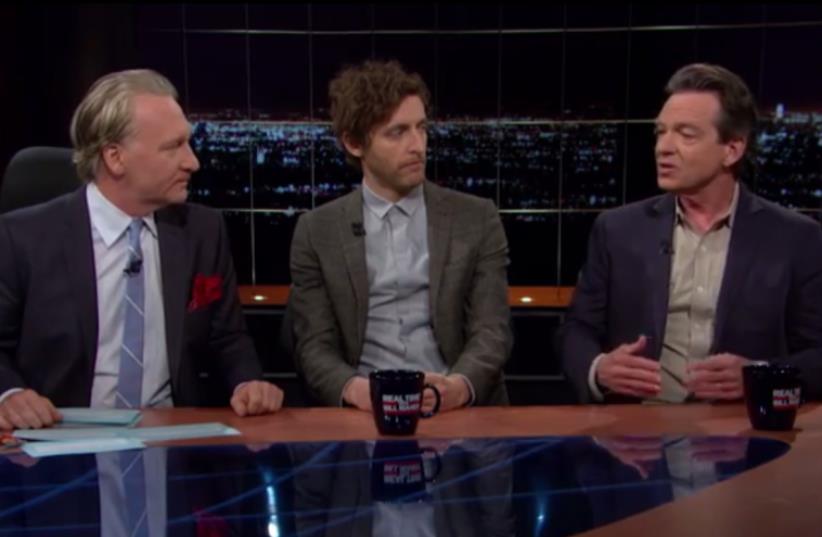 Author Lawernce Wright speaking with Bill Maher
(photo credit: YOUTUBE SCREENSHOT)
Advertisement
Pulitzer Award-winning author and screenwriter Lawrence Wright said Friday that former Prime Minister Menachem Begin was a "terrorist" who nevertheless had the "political courage to make peace" with Egypt in 1979.While speaking during the final segment of the hit HBO television show Real Time with Bill Maher, Wright was asked if he saw "any hope for further progress for peace" between the Palestinians and Israel. Lawerence, who was on Maher's show promoting a play he authored about the 1978 Camp David negotiations between Israel and Egypt that led to a peace accord the following year, said that given the players involved in those negotiations at that time there was always a chance for a negotiated settlement today."If you look at Camp David, you had a failing [United States] president [in Jimmy Carter]," Lawrence began."And then former [Egyptian president] Anwar Sedat, we think of him of being such a noble [figure]... he was an assassin. He'd been in prison twice. He managed to kill one of the government's ministers. He was a Nazi sympathizer," Wright said, adding "Menachem Begin was a terrorist." At which point Maher interjects and says "he blew up the King David Hotel."Wright then continues: "So you had an assassin, a terrorist and a failing president and they made peace. So don't tell me you need the right people, you just need people to have the political courage."On July 22, 1946,  The Irgun Zva’I Leumi (Irgun), led at the time by Menachem Begin, planted a bomb that ripped through the King David Hotel in Jerusalem,  then-headquarters of the British Mandate for Palestine’s civilian and military authorities, killing 91 people and injuring nearly 50.Wright had previously written a book about the Camp David negotiations in 2014 titled Thirteen Days in September: Carter, Begin and Sadat at Camp David.To watch the exchange in its entirety, the discussion takes place at the 9 minute 45 second mark.