Mort Klein, president of the Zionist Organization of America does not believe that Steve Bannon has been portrayed accurately in media reports. 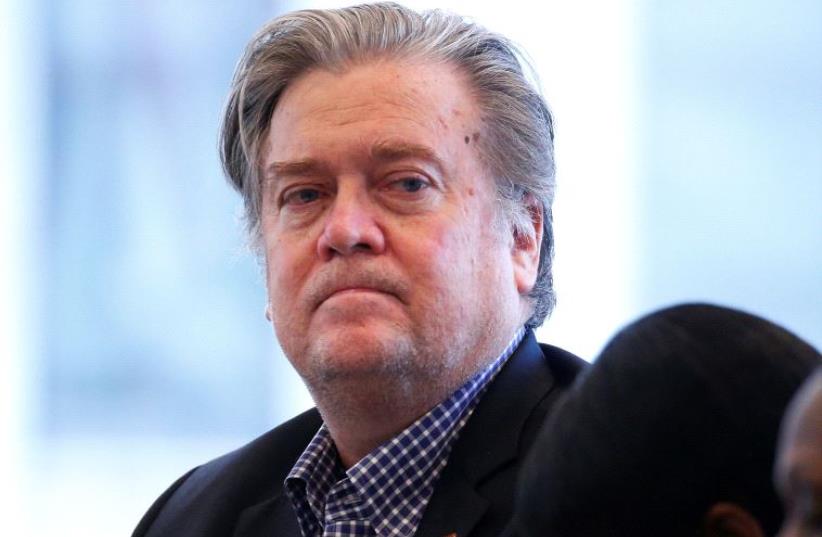 Stephen Bannon in 2016.
(photo credit: REUTERS)
Advertisement
WASHINGTON – Steve Bannon, a far-right firebrand who as of two weeks ago served as chief strategist to President Donald Trump, will address the Zionist Organization of America’s annual gala dinner in November.He will “take the podium” and say a few words, Mort Klein, president of the hard-right organization, told The Jerusalem Post. The dinner will also honor Joe Lieberman with a lifetime achievement award and host Trump’s ambassador to Israel, David Friedman, along with Sen. Tom Cotton of Arkansas.Bannon was forced out of the White House after his fellow staffers expressed dismay over his habit of strategically leaking politicized information to the press, over his refusal to work within a structured West Wing, and over the outside impression that he provided cover for white nationalists and supremacists in his consultations with the president. Bannon’s response to a white power rally on August 12 in Charlottesville, Virginia, reportedly expedited his departure.But Klein does not believe that Bannon has been portrayed accurately in media reports, and questions rumors that he himself has racial animus.“Do you think if he was in any way hostile to Israel or Jews that I’d really have him at my dinner?” Klein asked.“When he said Breitbart is the platform for the alt-right, what he meant was anti-establishment. That’s why he has this unfair image.”The alt-right has been defined by US newsrooms and hate group watchdogs as a loose coalition of white nationalists, white supremacists and neo-Nazi organizations.Asked whether he believes the most favorable voices for his political cause remained in the White House, or had left, Klein added: “Most of them have left – Jared Kushner and Jason Greenblatt are there, but they’re willing to speak to [Palestinian Authority President Mahmoud] Abbas and make concessions. I don’t agree with that.”ZOA’s event will be held on November 12 in New York City.