Biden hails Peres, 'an immigrant who nurtured a nation,' as a symbol in a 'cynical' time 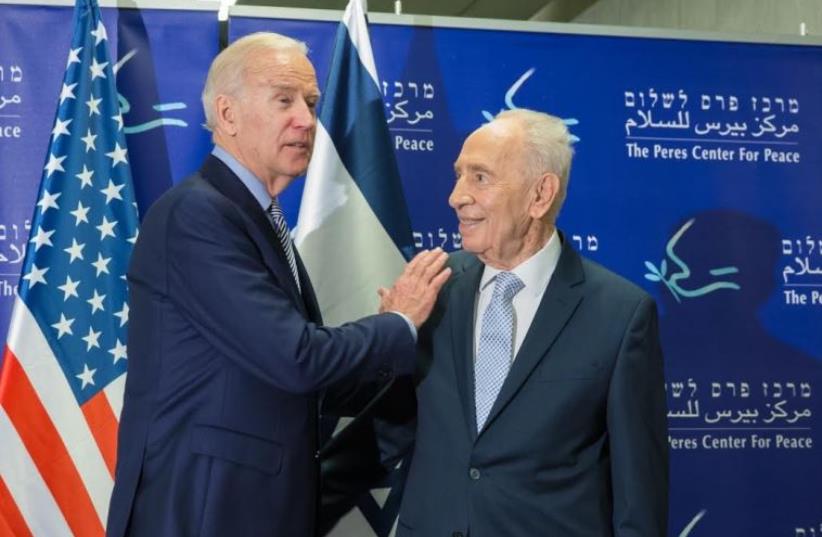 US Vice President Joe Biden meets with former Israeli president Shimon Peres at the Peres Center for Peace in Jaffa, March 8, 2016
(photo credit: ELAD MALKA)
Advertisement
WASHINGTON -- US Vice President Joe Biden hailed Israel's late founding father, Shimon Peres, as a symbol of optimistic leadership throughout dark times for the Jewish state on Thursday at a memorial service in Washington.Biden's eulogy of Peres, at a memorial service organized by the city's Jewish community, was a reflection on his personal relationship with a man that went to extraordinary efforts to make peace between Israel and its neighbors."Let's carry his legacy on in the future, so that his work and his faith in all of us continues to be rewarded," Biden said at the service, held at Adas Israel. "For Shimon, let us dream– let us dare."Peres, Biden said, had the "iron will and determination to endure that is still the indispensable quality of the Israeli character and wellbeing." He understood that Israel must exist to ensure the security of the Jewish people, Biden said, characterizing himself as a Zionist."I never saw or met a person of greater wisdom or eloquence," Biden said, calling Peres "the conscience and the soul" of the state.Biden offered his farewell just one week after Peres' funeral, attended by US President Barack Obama, former President Bill Clinton and US Secretary of State John Kerry, among dozens of other US dignitaries.Peres passed away after suffering a stroke several weeks ago. His legacy, Biden said, has particular relevance in a time "when its too easy to be cynical, when too many are too quick to cast blame on the outsider and the other," and when peace between Israel and the Palestinians seems like a distant dream, Biden said. Peres, he added, was "an immigrant who nurtured a nation.""Shimon insisted that every man, every woman, every child, Israeli, Palestinian– Jew, Christian, Muslim– should be treated with dignity," Biden said. "Rather than stoke fear and hatred, he always affirmed friendship and peace and possibilities."Madeleine Albright, former secretary of state under Clinton, also eulogized the former statesman, referring to him as an "incomparable man" and "one of the most principled leaders I have ever known.""The mountain top was visible" on the Israeli-Palestinian conflict under Peres' leadership, Albright said. "Many of us believed it was in reach.""There is nothing inevitable about conflict in the Middle East," she said of his legacy– "to choose the sword instead of the olive branch is a choice."