“The Siege,” which will open at the Lowry Theater in Manchester on May 13, is a re-telling of the April 2002 siege of the Church of the Nativity in Bethlehem. 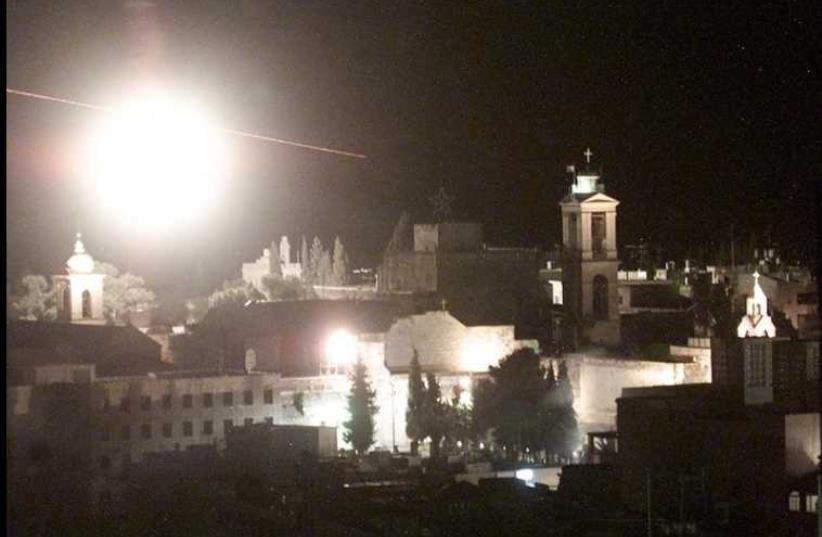 A flare and bullets fly over Bethlehem's center during an IDF attack on the Church of the Nativity, April 4, 2002
(photo credit: REUTERS)
Advertisement
British Jewish groups are “extremely concerned” about a new play set to premiere in England about a terrorist siege during the Second Intifada.“The Siege,” which will open at the Lowry Theater in Manchester on May 13, is a re-telling of the April 2002 siege of the Church of the Nativity in Bethlehem. Over the course of a 39-day standoff, Palestinian terrorists holed up in the church, taking clergy and civilians hostage. Eight Palestinian gunmen were killed.The Zionist Federation of Great Britain and Ireland told the London Jewish Chronicle that the play is a “whitewashing of the Second Intifada,” and the Board of Deputies of British Jews said that it would be “extremely concerned if it turned out to be the case that British taxpayers were funding a play that promoted terrorism as positive and legitimate.”The Zionist Federation acknowledged that it has not seen a preview of the play. The theater website describes the play as follows:A group of armed men seek sanctuary in one of the world’s holiest sites as the Israeli army closes in with helicopters, tanks and snipers. Along with the fighters are some 200 priests, nuns and civilians. The siege lasts for 39 days, paralysing the centre of Bethlehem and keeping tens of thousands under curfew… two dead bodies are decomposing in a cave below the church. While the world is watching, the fighters are faced with the question of whether to struggle to the end or to surrender. No matter what they choose, they will have to leave their families and their homeland behind forever.The European Union ended the church siege by negotiating to send 13 of the hostage takers, including Ibrahim Ibayat, who was linked to several previous terrorist attacks in Israel, into exile in Europe.