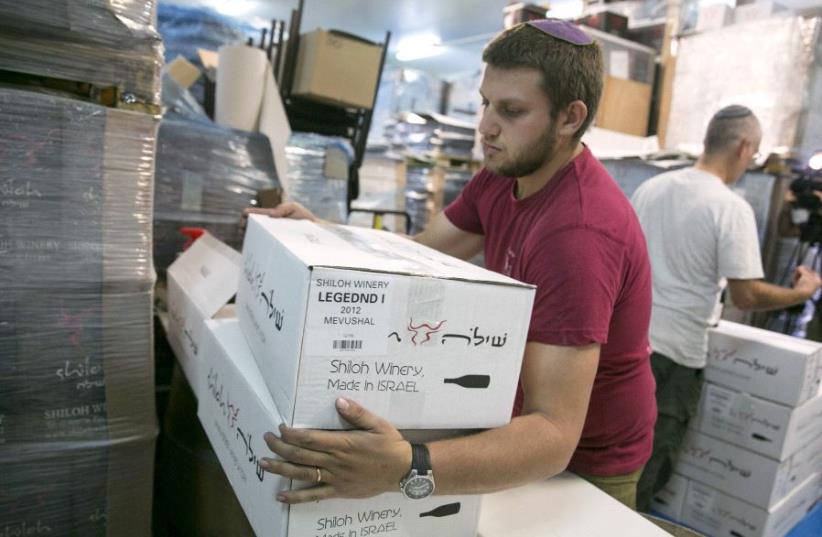 A worker carries boxes containing wine bottles for export at Shiloh Wineries, north of the West Bank city of Ramallah November 8, 2015.
(photo credit: REUTERS/BAZ RATNER)
Advertisement
All Israel-labeled bottles of wine may be sold once again in Ontario, Canada, after a directive to remove wine products produced in the West Bank from shelves was retracted. The Canadian Food Inspection Agency (CFIA) backtracked on their ruling on Tuesday that wine products labeled as "Product of Israel" should be removed from sale if their production could be traced to the West Bank. This led to the province of Ontario’s regulatory agency for liquor (LCBO) ordering vendors to remove such products from their shelves. CFIA overturned their decision in a statement posted on their website on Thursday."The Canadian Food Inspection Agency (CFIA) regrets the outcome of the wine labelling assessment which led to the Liquor Control Board of Ontario's (LCBO) response regarding products from two wineries labelled as 'Product of Israel'. In our assessment, we did not fully consider the Canada-Israel Free Trade Agreement (CIFTA)," said the statement. "We can confirm that the products in question can be sold as currently labelled. The CFIA will be following up with the LCBO to correct our original response."The CIFTA agreement, which came into effect in 1997, seeks to eliminate trade barriers and tariffs as well as increasing investments between Israel and Canada. The LCBO wrote to wine vendors in Ontario to remove wines from the Psagot and Shiloh wineries, explaining that "'Product of Israel' would not be an acceptable country of origin declaration for wine products that have been made from grapes that are grown fermented, processed, blended and finished in the West Bank occupied territory."Jewish and pro-Israel groups welcomed Thursday's decision to overturn the ruling. Canada's Center for Israel and Jewish Affairs (CIJA) organization, which aims to improve the quality of Jewish life in Canada, commended the revocation of the directive. "We thank the Government of Canada for its rapid action in resolving this matter, and for reaffirming the strength of the Canada-Israel relationship,” said CIJA Chair David J. Cape. The initial decision drew sharp criticism from Israel's embassy in Ottawa. "Israel supports free trade and objects to its politicization. We are currently in touch with the Canadian authorities and are discussing this matter," said the embassy's head of public diplomacy, Itay Tavor.Benjamin Weinthal contributed to this article.