The former Miss Colombia causes uproar over tweet using play on the similar-sounding Spanish words for an expletive slang term and 'Jewish.' 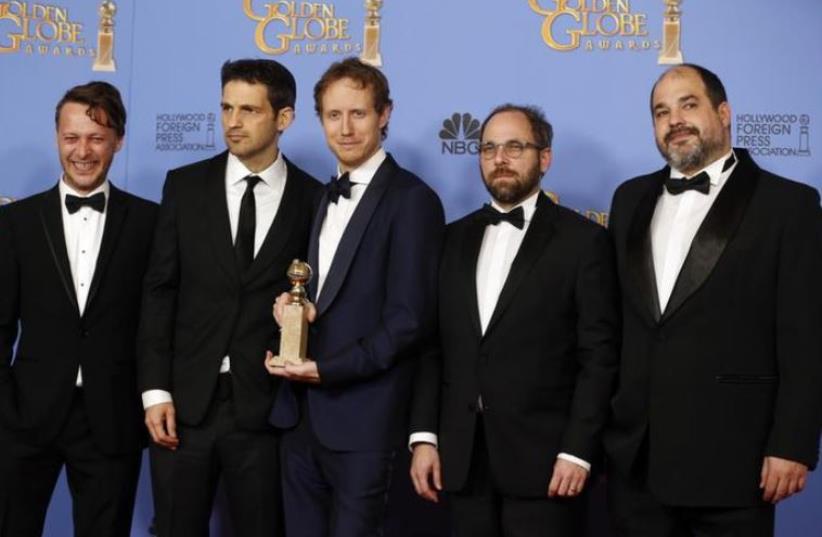 Director Laszlo Nemes (C) poses with the award for Best Motion Picture - Foreign Language for the Hungarian film "Son of Saul" with the film's star Geza Rohrig (2nd L) and other crew during the 73rd Golden Globe Awards in Beverly Hills, California January 10, 2016.
(photo credit: REUTERS)
Advertisement
A Colombian actress has caused an uproar garnering accusations of anti-Semitism after insinuating on social media that her country's nomination for best foreign film in the 2016 Academy Awards failed to win the Oscar because of the Jews of Hollywood. According to local media, Paola Turbay enraged the Colombian Jewish community after tweeting an apparent reaction to Hungarian Holocaust-era film "Son of Saul" winning the Best Foreign Language Film over the five other nominees in the category, including the South American nation's "Embrace of the Serpent.""That was f---ed up...Excuse me. Jewish," the former Miss Colombia tweeted on February 29 in play on the similar-sounding Spanish words for the expletive slang term and the religious one. Turbay later deleted the post and published a new message intending to clarify her previous statement.


"I'm sorry for the misunderstanding of my tweet. To the Jewish community, here is an explanation:" read the heading to a longer post in which she said that she had supposed the Holocaust concept was closer to the hearts of the Jewish members of the Academy than the Amazonian drama. "As you know, a large part of the industry and especially those who vote for the Oscar awards, are Jewish. For this reason I supposed that a theme like Son of Saul would influence them more than that of Embrace of the Serpent. The two movies are both brilliant and deserving of the award, but there is something closer to [heart] for them in #SonOfSaul," she wrote. "LOOK: If it had been Colombian Jews the situation would be different. The connection to the Amazon and the Holocaust," she wrote, adding "At the time of the vote emotion has a lot of weight."The well-known Colombian beauty ended her message, explaining that after speaking to some friends in the Jewish community she felt the need to explain that she had intended her tweet to be "a play on words, but not an offensive pun.""When I said 'f---ed up' I was referring to the situation and not to a group of people whom I profoundly respect and admire," she added.