At least two resolutions are currently under the pen related to the decades-old conflict: One being spearheaded by the Palestinian Authority, another by the French government. 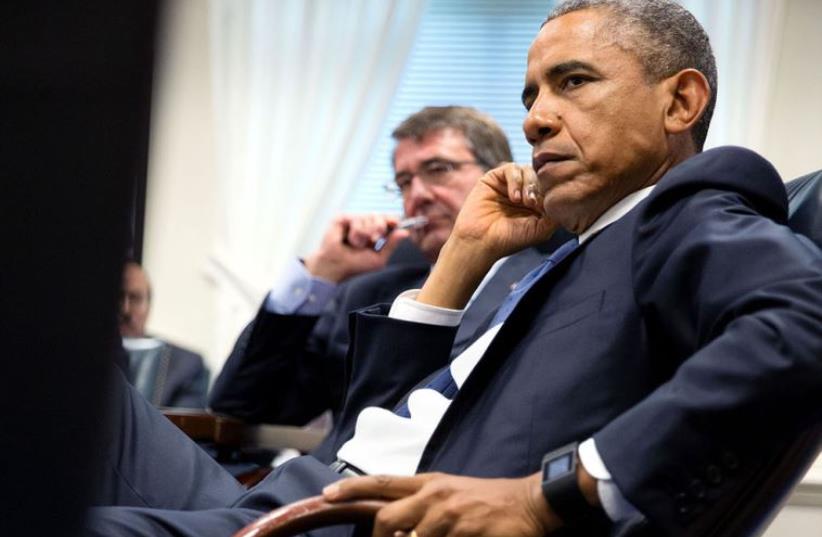 US President Barack Obama (R) and Defense Secretary Ash Carter meet at the Pentagon
(photo credit: OFFICIAL WHITE HOUSE PHOTO / PETE SOUZA)
Advertisement
WASHINGTON -- At least 90 percent of the House of Representatives opposes "one-sided" action at the UN Security Council on the Israeli-Palestinian conflict, according to a letter endorsed by 394 members this week– a clear message to the Obama administration, according to one of its authors, Rep. Nita Lowey of New York.Several congressmen worked on the letter, sent to the White House amid fresh Palestinian and European efforts to affect the conflict through international bodies.Lowey, a Democrat and ranking member on the House Appropriations Subcommittee, told The Jerusalem Post on Friday that the administration had vetoed similar resolutions in the past– and that its reasoning for such vetoes "still applies today.""I feel very confident– when just under 400 members of Congress, Democrats and Republicans, express their position with great clarity– that the administration will read the letter," Lowey said. "Maybe they'll read this letter very carefully."The letter calls on the administration to refuse support for "counterproductive efforts aimed at imposing a solution on the parties" and to oppose "and, if need be, veto one-sided United Nations Security Council resolutions." It also expresses frustration over the "lack of significant progress toward a lasting peace" between the two sides."It just can't be done from the outside looking in," Lowey stated, noting that the letter reflects on longstanding US policy. "We wanted to make this bipartisan."At least two resolutions are currently under the pen related to the decades-old conflict: One being spearheaded by the Palestinian Authority, another by the French government.The Palestinian draft would have the Security Council state it's opposition to Israel's settlement activity in the West Bank— a position held by each individual permanent members of the Council.The Paris-led initiative would have the Security Council outline parameters of a two-state solution. Democrats and Republicans alike, including Democratic presidential frontrunner Hillary Clinton, oppose this approach and warn that imposing solutions would prove counterproductive.But the White House said last year it was willing to review its policy toward the conflict in the United Nations, and it has yet to explicitly rule out such an approach. Israeli government leadership has not received assurances that the Obama administration would oppose either or both resolutions, the Post learned last month. "We understand that there is an early draft that the Palestinians have shared informally in New York," State Department spokesperson John Kirby said on Thursday, asked by the Post to clarify whether the US would consider voting for or declining to veto a resolution addressing Israel's settlement activity in the West Bank. "We are very concerned about trends on the ground and we do have a sense of urgency about the two-state solution. We will consider all of our options for advancing our shared objective of lasting peace between Israelis and Palestinians, but I’m not going to comment on a draft Security Council resolution."Trepidation over the issue has apparently affected negotiations over a new decade-long US defense package to Israel.Over breakfast with foreign policy reporters on Thursday morning, Speaker of the House Paul Ryan warned against any "funny" moves at the UN, arguing that such actions would run counter to peace. The US has long supported direct negotiations between the parties.In 2011, Susan Rice, who then served as US ambassador to the UN, said a Security Council condemnation of Israel's settlements would not practically move the political process forward. "Will it move the parties closer to negotiations and an agreement?" Rice questioned. "Unfortunately, this draft resolution risks hardening the position of both sides."Rice, who now serves as Obama's national security advisor, said the president's decision to veto that resolution should not be misconstrued as support for "the folly and illegitimacy of continued Israeli settlement activity."She also noted that the US had issued a proposal that would have "offered a constructive alternative course that we believe would have allowed the council to act unanimously to support the pursuit of peace." That proposal was rejected by other members.