Democrat Engel prepares to work with Trump on Israel

While Trump’s broad ambitions for peace are promising, Engel said, “it’s hard to speak about it, because it’s been so muddled.” 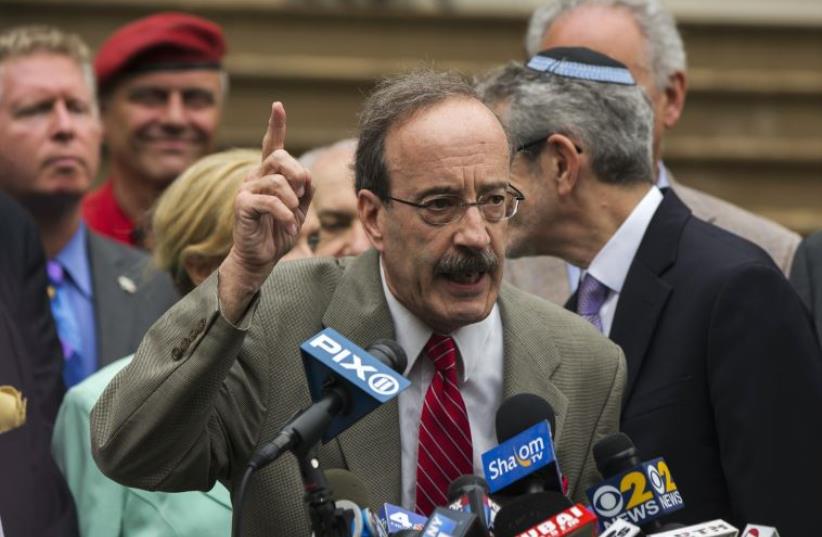 US Representative Eliot Engel (D-NY) speaks during a pro-Israel rally organized by local Jewish communities in front of City Hall in New York
(photo credit: REUTERS)
Advertisement
WASHINGTON – A leading Democratic voice on Israel and a bellwether of the Jewish community in Washington says he will support US President Donald Trump’s effort to forge Middle East peace.Rep. Eliot Engel of New York, the ranking member of the House Foreign Affairs Committee and co-chairman of the Congressional Israel Allies Caucus, told The Jerusalem Post that he has heard positive things about Jared Kushner, the president’s son-in-law and senior adviser on the peace effort. The longtime congressman continues to support negotiations toward a genuinely comprehensive agreement that would solve the Israeli-Palestinian conflict.“With all my troubles with Donald Trump and his policies, if he shows that he’s a pro-Israel president, I will praise him for it,” Engel said. “We don’t want Israel to be used as a political football. Presidents come and go and prime ministers come and go, [but] it is the US-Israel relationship that must remain.”While Trump’s broad ambitions for peace are promising, Engel said, “it’s hard to speak about it, because it’s been so muddled.”Trump has expressed a preference for a two-state solution, but has also said he would simply like to see an outcome that “both parties want” – suggesting such an outcome is possible outside the two-state framework.
Trump on the two state solution for Israel and Palestinians during meet with Trump , Feb. 15, 2017 (credit: REUTERS)
“To me, I still support the two-state solution, because I think it’s still the only viable way,” Engel said, appearing uncertain as to what Trump believes.“There are lots of things that need to be ironed out. I don’t believe that settlements are a major obstacle to peace. I believe the main obstacle is that the Arabs by and large have declined to acknowledge the right of Jews to have a state.”Jason Greenblatt, Trump’s longtime friend and lawyer who will now serve as the president’s special representative for international negotiations, traveled to Israel and the West Bank this week to orient himself with the region’s power players. He will report back to Kushner on what he discovered, according to State Department officials.“I don’t know him, but I’ve heard good things,” Engel said of Kushner, who is Orthodox. “I would think that he would have Israel’s best interests at heart if he sits down to negotiate.”Engel is an endangered sort of congressional Democrat: He was willing to work with George W. Bush and buck Barack Obama on matters of principle on Israel policy, and has consistently shaped consensus on Israel in Congress.But some issues on how one can best express support for the Jewish state continue to divide Republicans and Democrats. One such divide has some Republican lawmakers threatening to cut funding this year for the Palestinian Authority over its ongoing program of providing lucrative stipends for terrorist “martyrs” and their families.“We don’t want to cut off our nose to spite our faces,” Engel said, describing US aid to the PA as critical to its solvency. “If the PA collapses, what do we get next? Hamas? Sometimes we have to be careful.”Perhaps most concerning to Engel at the moment is a growing problem at home – the scourge of antisemitic threats, attacks and acts of vandalism that have gripped Jewish communities nationwide. Engel said he has never experienced anything like it in his decades of public service.“We need to come out loudly and clearly that antisemitism cannot be tolerated in this country ,” he said. “ If the president’s going to get out there and be forceful, then I think some of his supporters who might be antisemites might shut their mouths.”Engel praised American Jewish organizations for bridging partisan differences in order to address the threat, for aggressively lobbying the federal government to act, and for building coalitions with other faith groups in an effort to present a united pluralistic front.“We’ve always had leaders who would ultimately condemn – vehemently condemn – acts of antisemitism. This president seems to have hoped it would go away, and then made a passing mention,” Engel said, offering faint praise to Trump for leading his first address to a joint session of Congress with condemnation of the phenomenon.“He really needs to grab the bull by the horns,” he added.Engel will address The Jerusalem Post Annual Conference in New York on May 7. •