Displaced Jews in Ukraine are once again in harms way

Jewish community of Mariupol has suitcases ready, says local rabbi; Jews from Donestk forced to move out, look for new place to avoid being caught in crossfire.

By SAM SOKOL
SEPTEMBER 1, 2014 03:27
A Ukrainian helicopter flies over Donetsk
(photo credit: REUTERS)
Advertisement
Ukrainian Jews who fled to Mariupol to escape their country’s brutal civil war may have to uproot themselves again as the Ukrainian Army prepares to defend the southeastern coastal city, community leaders there told The Jerusalem Post.More than 100 families from Donetsk, one of the primary centers of the Moscow- backed insurgency, have arrived in Mariupol in recent weeks, according to Rabbi Pinchas Vishedski.The leader of Donetsk’s Jewish community, Vishedski had vowed to stay in the city as long as any of his constituents remained, but was forced to leave when the water supply was cut and electricity became intermittent.His colleague and fellow Chabad hassid, Rabbi Shalom Gopin of Luhansk, led a similar exodus, bringing many of his congregants to a camp for internally displaced Jews in the northwestern city of Zhitomir.There are several hundred Jews left in Donetsk and potentially as many as 1,000, out of a prewar community of 11,000, Vishedski told the Post during a telephone interview from Mariupol on Sunday.Most families with children have been evacuated, he said, adding that anyone still looking to leave Donetsk can contact the community’s hotline to receive money and resources necessary to flee.Describing the situation that prompted the exodus, he recalled daily shelling and rocket strikes that endangered the lives of the city’s remaining residents. Up to three quarters of the city’s one million citizens have fled, either to Russia or to western Ukraine, according to media reports.Ukrainian soldiers and civilians are digging in around the city, which lies on the coast of the Sea of Azov and appears to be the next target for pro-Russian separatists, who are now making territorial gains after throwing back a Ukrainian military offensive that many thought had the potential to end the insurgency.Since arriving in Mariupol, Vishedski has worked to rent 50 apartments for the over 200 displaced Jews, according to a report from a Chabad website.Both Kiev and western leaders have alleged that the rebel victories have been reached with military aid from Russia.According to NATO “over 1,000 Russian troops are now operating inside Ukraine.”As the rebels advance towards Mariupol, residents have begun emptying supermarkets, withdrawing their savings from local banks and hoarding gasoline, said city rabbi Mendel Cohen. 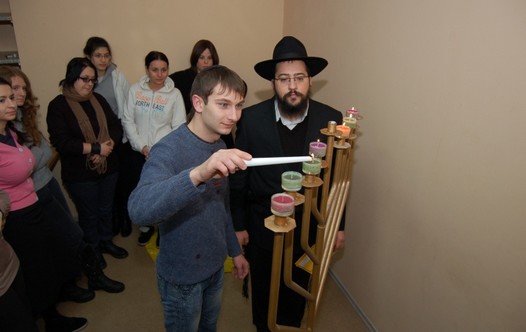 While large numbers of people have left the city of almost half a million residents, many members of the Jewish community remain, although almost all of them have packed their suitcases in preparation for their own flight, he said.Cohen said his community has worked to provide food and lodging for their brethren from Donetsk and that anyone looking to leave Mariupol will be provided with transport to the Zhitomir camp and subsequent financial help to secure a rental apartment. Much of this money comes from the International Fellowship of Christians and Jews, which is working closely with Ukraine’s network of Chabad rabbis, he said.The community is currently working on contacting families with children to inform them that a bus to Zhitomir is being arranged, he said, adding that the first bus could leave as early as Monday.There are many who are worried about traveling, he added, explaining that there is a perception that the roads away from the city are dangerous.Despite that, however, television reports from the city have shown lines of cars kilometers long leaving Mariupol, waiting to be allowed past Ukrainian army checkpoints on the city’s periphery.The Jews of Donetsk “left their homes and came here to find a safe place and they got it for a month but now the situation is very hot,” explained Aaron Kagnovski, a 29-year-old community activist and father of two from Mariupol, who has been working to maintain the community in the face of impending battle.Unsure of what to do himself, Kagnovski said that his wife wants to leave the city but that he does not feel that he can abandon his people.“I can’t leave the synagogue, I can’t leave the community, I can’t leave the people,” he said.“Maybe I will send my family [away] and live here. I hear that Zhitomir is a safe place but I’m not sure yet.”“It’s a very difficult decision, because my wife is getting more and more nervous. My head is almost exploding, but one thing I know for sure: I feel that I cant leave the people here,” he continued. “If one year ago I was told that it will be a situation like this in Ukraine I would have laughed.”“No one imagined that,” he said.Reuters contributed to this report.
Advertisement
Subscribe for our daily newsletter