Dov Lipman, StandWithUs partner to teach US campers about BDS

We’re trying to prepare them for the ‘anti-Israel onslaught’ on US campuses, former MK says 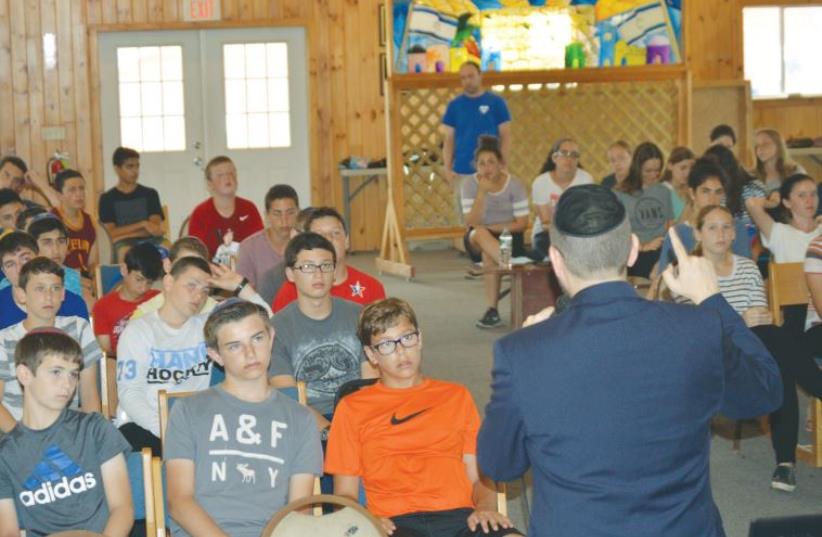 FORMER MK Dov Lipman speaks to youngsters at Camp Mesorah in Guilford, New York on Thursday
(photo credit: Courtesy)
Advertisement
Former MK Dov Lipman traveled to the US last week to speak about the Boycott, Divestment and Sanctions movement to high-school aged campers at six Jewish summer camps in New York and Pennsylvania. The tour was sponsored by the World Zionist Organization where Lipman works as director of public diplomacy in the vice chairman's office .The program piloted at Camps Morasha, Dina, Seneca Lake, Lavi, Ramah and Mesorah in order to reach as many youngsters as possible.“I chose this region because it has the most camps in a small geographic area,” explained Lipman.He was inspired to educate young students on the realities of BDS initiatives and protests, particularly on American college campuses, given the recent momentum of the anti-Israel movement.“It has been bothering me that so many Jewish kids arrive on campus without any preparation for what they will face,” said Lipman on his decision to create the program. “I figured in summer camps you have very large numbers and it is a setting where they are more relaxed and I perhaps would be able to grab their interest.”Grab their interest he did.“The campers did not want to leave and were fascinated with the information that was presented,” said Leah Savage, program director at Camp Seneca Lake in Wayne County, Pennsylvania.“I always looked at Israel as very important,” said Camp Ramah of the Poconos attendee Sam Caplan, 16. “Now I realize even more that Israel needs our support. The talk reinforced that perception and taught me that all Jews play a role in defending the State of Israel.”Lipman partnered with the Israel education program StandWithUs, a 15-year-old, international nonprofit that supports people around the world who want to educate their campuses and communities about Israel.They presented the facts about BDS, but were careful to make clear that the Jewish state is not perfect.“I explained to the campers that we have a conflict and that conflicts are never good,” Lipman said. “We do make mistakes and there are results that we don’t want, like innocent people being killed.”Lipman continued, saying that Paul Friedman, Tri-State Area (New York, New Jersey, Connecticut) high school coordinator for StandWithUs, was also careful to strive for objectivity.“He explained the difference between legitimate criticism and anti-Semitism and also taught the campers how to acknowledge that the other side can have pain and complaints while also making the case for Israel,” the former Yesh Atid lawmaker said.“These students may go to pro-Israel schools and grow up in Zionist homes, but they still go to college unprepared for the anti-Israel onslaught they may face,” said Lipman.“It is critical that we prepare them for this at the youngest of ages.”However, Lipman does not think his BDS education program should affect which college students choose to attend.Gabe Lebeau, 16, of Camp Ramah in the Poconos, in Lakewood, Pennsylvania, said the presentation won’t affect his decision, but did open his eyes to world events.“I was aware of BDS before the program, but not to the extent that it exists on college campuses,” said Lebeau. “The program made me want to be more active with Israel and provided me with a means to do it. I do love Israel, but I also see the need of holding her to a higher standard.”Rabbi Joshua Gruenberg, the rabbi of Congregation Beth El Yardley in Yardley, Pennsylvania, outside Philadelphia, is confident the program will help.“It will help kids to engage with people who batter Israel at every turn, in an intellectually honest and calm way. We cannot be apologetic when it comes to Israel, but we must also as Jews help correct the state when it does not live up to its ideals,” he said.

Dov Lipman's participation in the anti-BDS tour was sponsored by the World Zionist Organization where he works as director of public diplomacy in the vice chairman's office.