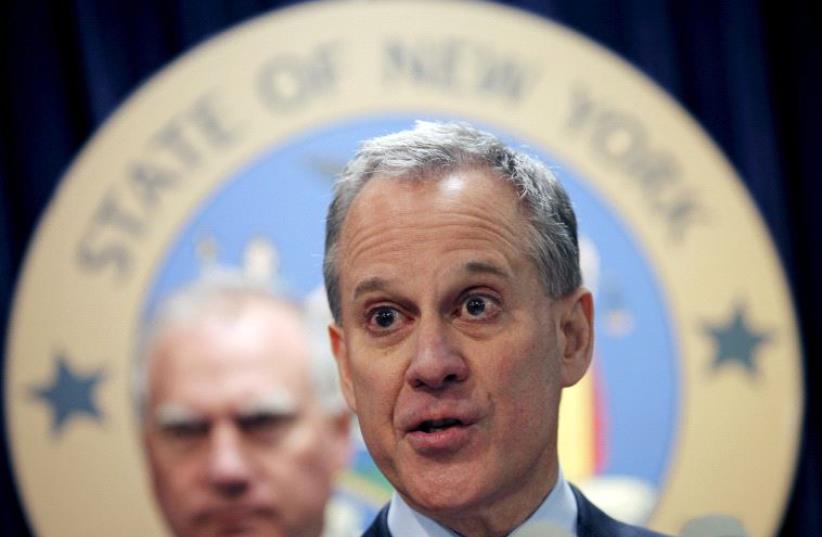 New York Attorney General Eric Schneiderman speaks at a news conference
(photo credit: MIKE SEGAR / REUTERS)
Advertisement
(JTA) — New York Attorney-General Eric Schneiderman, who resigned hours after The New Yorker published a report detailing allegations against him by four women who said that he physically abused them, will not face criminal charges due to “legal impediments.”Nassau County District Attorney Madeline Singas, the special prosecutor overseeing the investigation, told CNN on Thursday that the women fully cooperated with the investigation.“However,” she said, “legal impediments, including statutes of limitations, preclude criminal prosecution.”Schneiderman, 63, had been an active supporter of the #MeToo movement, including bringing legal action in New York against disgraced film producer Harvey Weinstein, who is on trial for sexually assaulting women.Two of the women named in the article, Michelle Manning Barish and Tanya Selvaratnam, told the magazine that while their romantic relationships with Schneiderman were consensual, he hit them and choked them without consent, and that it often occurred after drinking and in the bedroom. Some of the incidents required medical treatment, they said, though they did not file police reports about the incidents.Barish and Selvaratnam also said that Schneiderman threatened to kill them if they stopped seeing him. Two other women, who were not named, said they experienced similar violence in their relationships with Schneiderman.Singas said the investigation found no misconduct by Schneiderman’s staff in the Office of the Attorney General.Schneiderman told CNN in a statement released by a spokeswoman that he accepts full responsibility for his actions.“I recognize that District Attorney Singas’ decision not to prosecute does not mean I have done nothing wrong,” the statement said. “I accept full responsibility for my conduct in my relationships with my accusers, and for the impact it had on them.“After spending time in a rehab facility, I am committed to a lifelong path of recovery and making amends to those I have harmed. I apologize for any and all pain that I have caused, and I apologize to the people of the State of New York for disappointing them after they put their trust in me.”