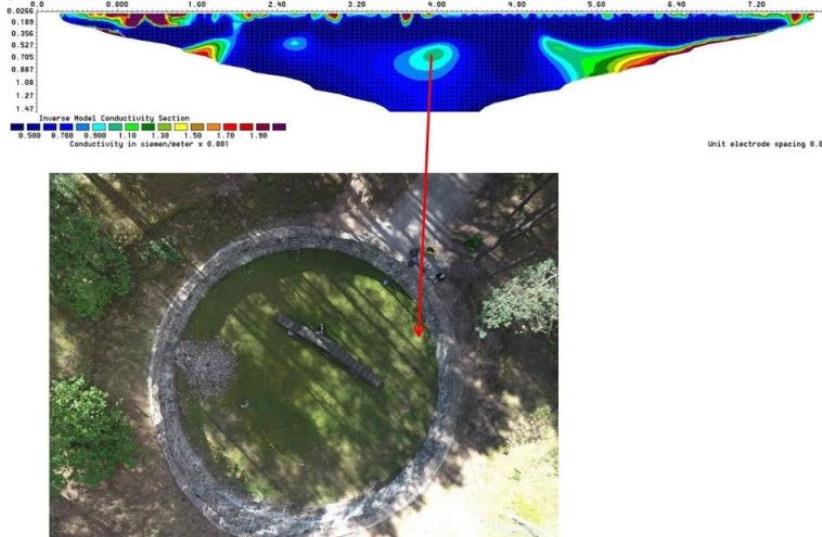 A scan of the site using Electrical Resistivity Tomography
(photo credit: COURTESY EZRA WOLFINGE/NOVA)
Advertisement
Lost since the end of World War II in 1945, a tunnel dug by Jewish prisoners at Ponar (today Paneriai), near Vilnius, Lithuania, to escape from the Nazis was discovered recently using state-of-the-art mineral and oil exploration technology for underground predictive scanning.The Holocaust-era tunnel was found through the joint efforts of Israel’s Antiquities Authority, the University of Hartford, Calgary, Canada- based oil and mining consulting firm Advisian, the Vilna Gaon State Jewish Museum in Vilnius, and PBS Series NOVA, the Antiquities Authority announced on Wednesday.The tunnel discovery will be featured in a documentary being produced by the award-winning science series NOVA set to be broadcast in the US in 2017. The film will tell the story of the doomed Jews of Vilna, now Vilnius, through archeological excavations of several sites in and around the Lithuanian capital, including the excavation of the Shulhof, the Great Synagogue where the Vilna Gaon had his yeshiva.An estimated 100,00 people, including 70,000 Jews, 20,000 members of the Polish intelligentsia, and 8,000 Soviet POWs, were murdered in the Ponary Massacre by German SD, SS and Lithuanian Nazi collaborators between 1941 and 1943. The majority of the victims were Jews living in Vilna and the surrounding area.In 1943 with the retreat of German forces on the Eastern Front as the Red Army advanced, the Nazis tried to cover up their crime under the Aktion 1005 directive. Eighty inmates from the nearby Stutthof concentration camp were formed into a Leichenkommando (corpse unit). The slave laborers were forced to dig up the rotting bodies, pile up the corpses on logs cut from the forest, pour gasoline on the pile and incinerate the dead. The ashes were then ground up, mixed with sand and buried.At night, the prisoners were held in a killing pit previously used in the massacre. As they worked with their legs shackled, the prisoners knew that upon completing their gruesome task they too would be murdered. Some determined to escape that fate by digging an escape tunnel. 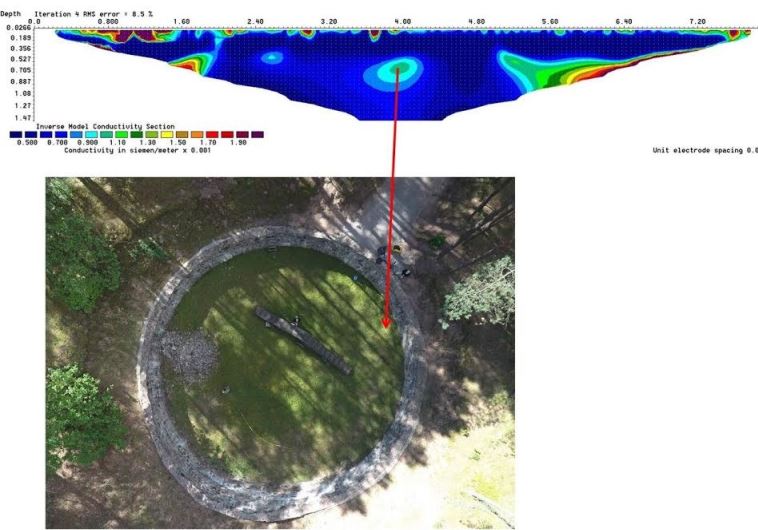 A scan of the site using Electrical Resistivity Tomography (Credit: COURTESY EZRA WOLFINGE/NOVA)For three months they clawed out a 35-meter-long burrow, using spoons and their bare hands. On the night of April 15, 1944 – the last night of Passover, 40 prisoners cut their leg shackles with a nail file, and crawled through the escape tunnel.Twenty-five of them were shot by the guards. Fifteen managed to cut the camp’s perimeter fence and escape into the Ponar forest. Eleven joined up with the partisan forces and survived the war.Since the end of WWII, the location of the tunnel was lost, although a number of attempts were made to find it. Now, through the joint work of the Antiquities Authority’s Dr. Jon Seligman, Prof. Richard Freund of the University of Hartford, Paul Bauman of Advisian, and the Vilna Gaon State Jewish Museum, the tunnel has been rediscovered using a geophysical technique used in mineral and oil exploration known as Electrical Resistivity Tomography.Seligman said the project had enormous meaning for him.“As an Israeli whose family originated in Lithuania, I was reduced to tears on the discovery of the escape tunnel at Ponar,” he said. “This discovery is a heartwarming witness to the victory of hope over desperation. The exposure of the tunnel enables us to present, not only the horrors of the Holocaust, but also the yearning for life.”Culture Minister Miri Regev praised the Antiquities Authority for its role in the historic find, and noted its importance in the face of Holocaust deniers.“I congratulate the Israel Antiquities Authority on its participation in this international effort that turns history into reality,” said Regev. “The exciting and important discovery of the prisoners’ escape tunnel at Ponar is yet more proof negating the lies of the Holocaust deniers. The success of modern technological developments has aided the Jewish people to reveal another heroic story the Nazis attempted to hide, profiting all humanity.”“The discovery of the evidence of an escape tunnel at the Ponar pit sheds new light on a story of life, resistance and courage,” the Antiquities Authority said.The Authority added that all the partners involved in the undertaking plan to return to the site soon to expose the tunnel for public viewing as part of the memorial for the victims of Vilna and the surrounding area.