Lord Michael Ian Grade specifically criticized journalist Orla Guerin, whose report from Israel did not include the “wider context” of the recent attacks. 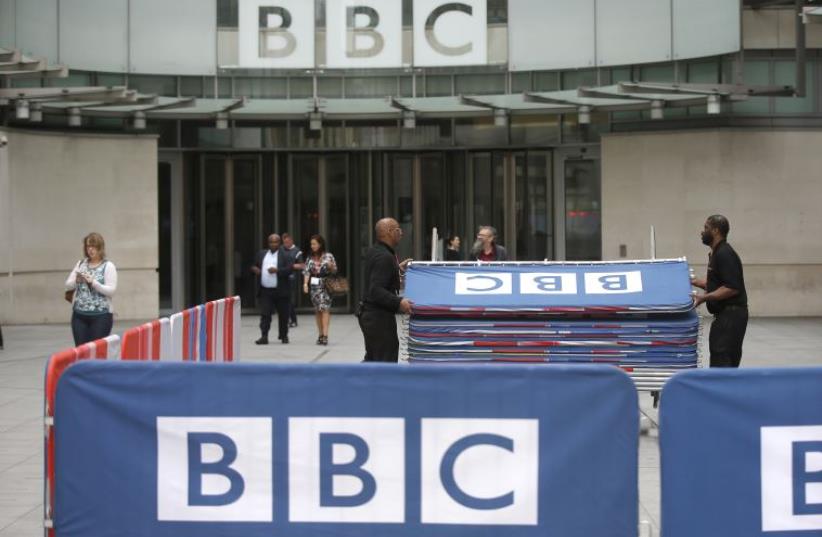 BBC headquarters
(photo credit: REUTERS)
Advertisement
The former chairman of the BBC, Lord Michael Ian Grade, criticized the British news network for its coverage of the recent wave of terror attacks in Israel in a letter to the corporation's director of news and current affairs, James Harding.
The Battle Behind the Headlines: Media bias against Israel?
In the letter, Grade specifically criticized journalist Orla Guerin, whose report from Israel did not include the “wider context” of the attacks and equated “Israeli victims of terrorism and Palestinians who have been killed by Israeli security forces in the act of carrying out terror attacks,” according to the British advocacy group Conservatives Friends of Israel, which was the first entity to report on the letter."An emotional interview is conducted with the father of a dead Palestinian youth who had been killed committing a fatal terror attack. However, the report failed to show the emotional distress caused to Israelis by any of these recent attacks. This is inexcusable," Grade wrote in the letter."Additionally, it was improper of the correspondent to claim that 'there's no sign of involvement by militant groups,' before immediately showing footage of Palestinian Islamic Jihad banners at the home of a 19-year-old terrorist who carried out a deadly knife attack at Lions' Gate in Jerusalem on Oct. 3. PIJ is a well-known Palestinian terror organization and it has since claimed responsibility for the attack and been praised by Hamas, another internationally proscribed terror organization. This directly misleads viewers,” he added.The fact that Guerin did not show Palestinian rock-throwers in her report limited viewers’ “awareness and understanding of what is undoubtedly a complex issue.""Regrettably, this is not the first time the standard of reporting and impartiality has been unsatisfactory in recent weeks" at the BBC, Grade wrote.A BBC spokesperson said in response that, “We are committed to reporting all aspects of a very complex conflict in a fair and balanced way, reflecting a range of voices. We believe our impartiality is best measured by considering the full spectrum of the BBC’s reporting, rather than an individual story. We will be sending Lord Grade a full response to his letter.”