French PM: Attacks in France, Israel show we are ‘in world war’

In explaining the reasons for the existence of a terrorist threat in France, he noted “upheaval in the Arab world" and and “the reality in certain neighborhoods in France." 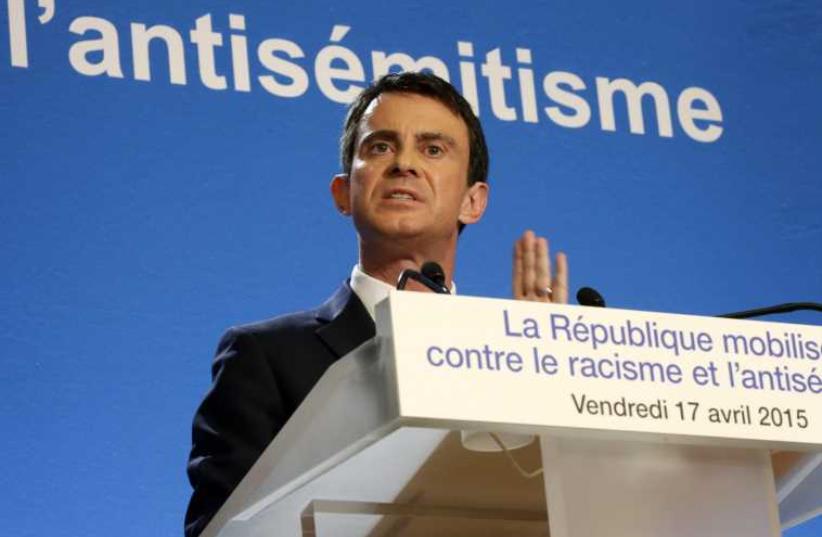 French Prime Minister Manuel Valls leaves after a speech to present a plan to fight racism and anti-Semitism at the Prefecture in Creteil near Paris April 17, 2015.
(photo credit: REUTERS)
Advertisement
Listing terrorist attacks in Israel along with attacks by the Islamic State, French Prime Minister Manuel Valls said they showed “we are in a world war.”Valls made the statement Monday at a Paris hotel in an address before approximately 350 listeners, mostly from the Jewish community, during an event organized by CRIF, the umbrella group of French Jewish communities.In explaining the reasons for the existence of a terrorist threat in France, he noted “upheaval in the Arab world” and “the reality in certain neighborhoods in France, where young people are being radicalized.”“There are more and more terrorist attacks all over the world. In France, Burkina Faso, in Jakarta, in Israel, it keeps happening and it shows we need to learn to live with it,” Valls said.Asked whether the government was doing enough to protect French Jews from attacks following the slaying of four in January 2015 at a kosher supermarket, Valls said: “Yes, we are doing 100 percent, employing all measures, and we will continue to do so, but the risk is not negligible.”Valls condemned former Foreign Minister Roland Dumas, who last year said Valls is “under Jewish influence” because of his wife.“It is anti-Semitism of the worst kind,” Valls said of Dumas, “and certain compulsive anti-Semites act on the fact that my wife is Jewish.”In 2011, Valls said his marriage to Anne Gravoin connected him “in an eternal way” to Israel and the Jewish people.Valls, a Socialist who became prime minister in 2014 after a two-year stint as interior minister, enjoys considerable popularity among French Jews for his outspokenness against anti-Semitism and his rejection of attempts to boycott or isolate Israel, including through the Boycott, Divestment and Sanctions movement. He has been criticized for his stance.At the event Monday, Valls also said “there needs to be firmer action on BDS events” in France, citing France’s unique set of laws which proscribe discriminating against nations.CRIF President Roger Cukierman thanked Valls for appearing at the event.“On a number of occasions, you said very powerful things: That anti-Zionism is anti-Semitism, that France without its Jews is no longer France,” Cukierman said. “This makes you a dear politician.”