From Groucho Marx to Seinfeld, Jews dominate list of most influential comedy

The chosen people have remained a consistent comedic force, showing up in every decade. 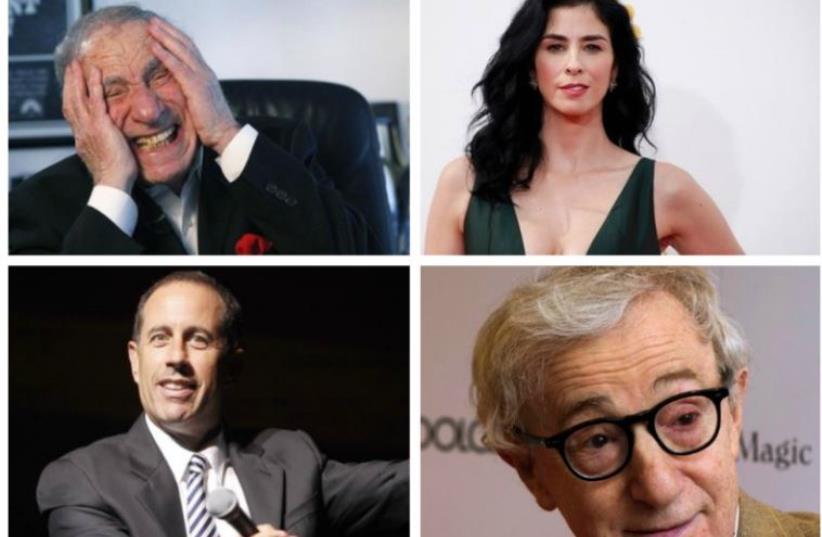 Jewish comedians: Mel Brooks (top left), Jerry Seinfeld (bottom left), Sarah Silverman (top right), and Woody Allen (bottom right)
(photo credit: REUTERS)
Advertisement
New York magazine’s culture section, Vulture, this week published a mega-listicle, “The 100 Jokes That Shaped Modern Comedy.” With the help of comedians and historians of comedy, the magazine’s editors compiled the most important jokes ever uttered — from Charlie Chaplin making dinner rolls dance to Louis C.K. dissing his daughter.And Jews dominate the list.Just 2 percent of the US population, the chosen people had a hand in no fewer than 50 of Vulture’s 100 jokes.Beyond the numbers, Jews have remained a consistent comedic force, showing up in every decade: Vaudeville in the teens and ’20s, the Marx Brothers in the ’30s, the Borscht Belt in the ’40s and so on — all the way up to Jerry Seinfeld, John Stewart, Judd Apatow and Amy Schumer. (Though Adam Sandler, who ruled the ’90s, somehow didn’t make the list.)Most of the jokes are Jewish by virtue of who wrote or performed them. But some explicitly reference Judaism and traits associated with it — from Yiddish accents to circumcision.Here’s a sampling of the most-Jewish moments on Vulture’s list:Cohen on the Telephone (1913)

In what Vulture called “the definitive Jewish vaudeville monologue,” George L. Thompson struggles to conduct business on the phone, owing to his Old World, Yiddish inflections — a tactic Jewish comedians have used ever since. Hilarity ensues.Duck Soup (1933) In one of the most iconic films of one of the most iconic Jewish comedy acts, Groucho Marx channels the anxiety leading up to World War II through the character of a man who becomes leader of a small nation and then goes to war. All four Marx Brothers dance as Groucho excitedly declares war.Johnny Carson discovers a mohel (1965)

It’s Ed Ames who’s Jewish but Johnny Carson who makes a Jewish joke in this clip. When Ames throws a tomahawk and misses his mark, Carson comes back with a perfect one-liner.Springtime for Hitler (1968) Mel Brooks. Zero Mostel. Gene Wilder. Nazis on Broadway. ‘Nuff said.Annie Hall (1977) Watch Woody Allen reach peak Jewish neurosis in the opening to one of his best films. “I think I’m gonna get better as I get older, you know? I think I’m gonna be the balding virile type, you know, as opposed to, say, the distinguished gray, for instance, you know? ‘Less I’m neither of those two. Unless I’m one of those guys with saliva dribbling out of his mouth who wanders into a cafeteria with a shopping bag screaming about socialism,” Allen says.Seinfeld talks “Seinfeld” (1992)

In a meta moment, George pitches Jerry on a sitcom for NBC modeled on “Seinfeld”: A show about nothing that manages, somehow, to be about everything.

Sarah Silverman and the Jewish doctor (2005)

The risque comedienne pushes the boundaries when she recalls an experience that was “so bittersweet for a Jewish girl.”