Around 40 protesters were present at Wednesday’s march, according to local media and were prevented from coming within several hundred meters of the SS supporters. 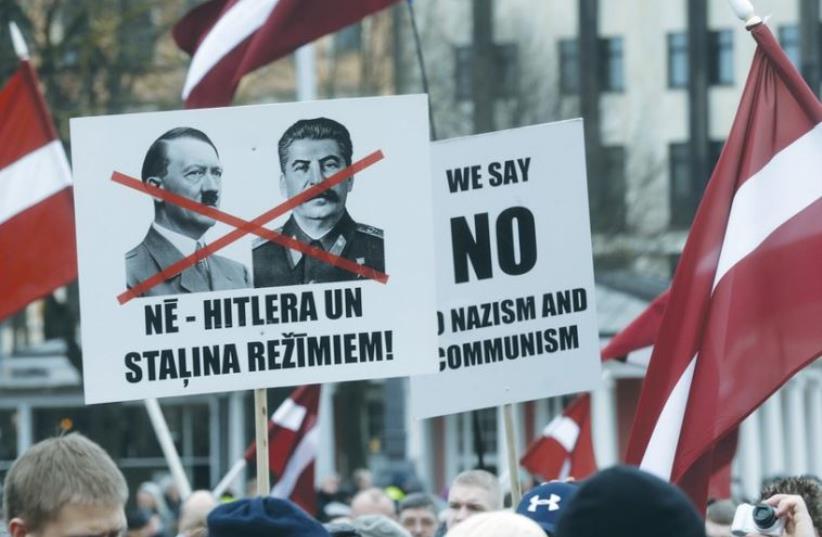 PEOPLE PARTICIPATE in the annual procession commemorating the Latvian Waffen-SS (Schutzstaffel) unit in Riga
(photo credit: REUTERS)
Advertisement
Several German anti-fascists were arrested in Latvia this week after arriving to protest an annual march by former Nazi collaborators and their supporters.The marchers, whose ranks included a number parliamentarians, made their way through the capital city of Riga on Wednesday in an annual show of support for the anti-Soviet Latvian Legion – a locally raised unit of the Waffen-SS.Five members of the Berlin-based Association of Persecutees of the Nazi Regime/ Federation of Anti-Fascists (VVN-BdA) – Thomas Willms, Markus Tervooren, Günther Hoppe, Lothar Eberhard and Werner Müller – were detained by Latvian officials after landing in Riga on Tuesday, the group claimed. In addition, the organization’s leader, Cornelia Kerth, was denied permission to enter the country and was prevented from boarding an Air Baltic flight from Germany.In a statement released on the day prior to the march, the group accused Latvian authorities of “repression” against Latvian protesters.“For years, the march of Waffen-SS admirers enjoys the protection of the Latvian government. The few anti-fascists who protest against the right deployment will be handled by politicians and the media as enemies of the state,” the VVN-BdA accused, adding that the five detained protesters were given a choice of deportation or two-days incarceration.Around 40 protesters were present at Wednesday’s march, according to local media and were prevented from coming within several hundred meters of the SS supporters.“The Security Police has warned that provocations might be attempted by some persons who have arrived from abroad,” The Baltic Times reported.Thirteen members of parliament were reported to have participated in the march.Two years ago the country’s environmental minister was fired after disobeying a prime ministerial directive for cabinet members to refrain from participating.According to Efraim Zuroff of the Simon Wiesenthal Center, while the Latvian Legion did not directly participate in Holocaust crimes, it did fight for the Germans and many off its members had previously taken part in the mass murder of Jews as part of the Latvian security police and the Arajs Kommando, a police unit connected to the German SD.“The organizers of the march are trying to present the members of the legion as freedom fighters who paved the way for Latvian independence but nothing could be further from the truth,” he said.“The Nazis had absolutely no intention of granting independence to any of the Baltic countries and it is only because Nazi Germany lost the Second World War could Latvia regain its independence after the fall of the USSR. People who fought for victory of Third Reich should not be glorified as heroes – such a victory would have meant the end of Western civilization,” he said.Calling the arrest of the German protesters “absurd,” Zuroff, who was present in Riga for the march, called the decision to keep protesters far from the Legion supporters “highly objectionable.”Last week Latvian parliamentarian Karlis Serzants made waves when he was reported as saying that “clever Jews” were responsible for several national problems.