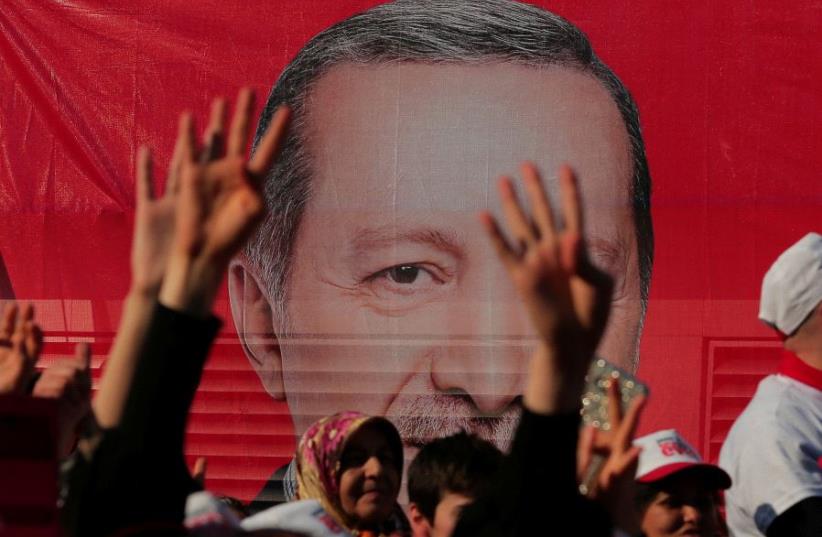 Supporters listen to the speech by Turkish President Tayyip Erdogan during a rally for the upcoming referendum in Istanbul, Turkey
(photo credit: REUTERS)
Advertisement
The Jewish community in the city of Mannheim broke off talks and exchanges with the Turkish Ditib religious association because its headquarters in Ankara spreads antisemitism, the Mannheimer Morgen newspaper reported.Majid Khoshlessan, the chairman of the Jewish community, said it cut ties with the Turkish-Islamic Union for Religious Affairs (referred to in Germany as Ditib) because of “antisemitic statements” from Ditib’s central office in Ankara.The small Jewish community (478 members) in the state of Baden-Württemberg agreed to end exchanges with the Ditib in a nearly unanimous resolution vote at its membership meeting. That means not accepting invitations from the Muslim group and not extending invitations to Ditib.In 2015, The Jerusalem Post reported that the webpage of Ditib’s branch in Melsungen, in Hesse state, contained such quotes as: “The Jews are cruel and malicious,” “The Jews are stingy,” “[The Jews] lie and cheat,” “Jews violate contracts and promises,” and “They [the Jews] falsified the Torah.”Jens Meyer-Wellmann, deputy editor of the Hamburger Abendblatt newspaper, blasted Ditib in his September commentary for its anti-Western and anti-Christian views. If Ditib does not expel the extremists from its ranks, cities should cease cooperation with the NGO, Meyer-Wellman wrote.Burkhard Freier, the head of intelligence for the German state of North Rhine-Westphalia, said on Thursday that the Turkish government uses Ditib to spy on alleged opponents of President Recep Tayyip Erdogan’s government.Ditib’s German headquarters in Cologne expressed “regret and dismay” over the Mannheim Jewish community’s decision, adding the NGO condemns antisemitism, and appealed to Khoshlessan to not “tear down bridges.”The Bild mass circulation newspaper reported on Thursday that the German government slashed its funding of Ditib by 80%.In 2017, Ditib received €1.5 million from the federal government. It will receive €297,500 for 2018.