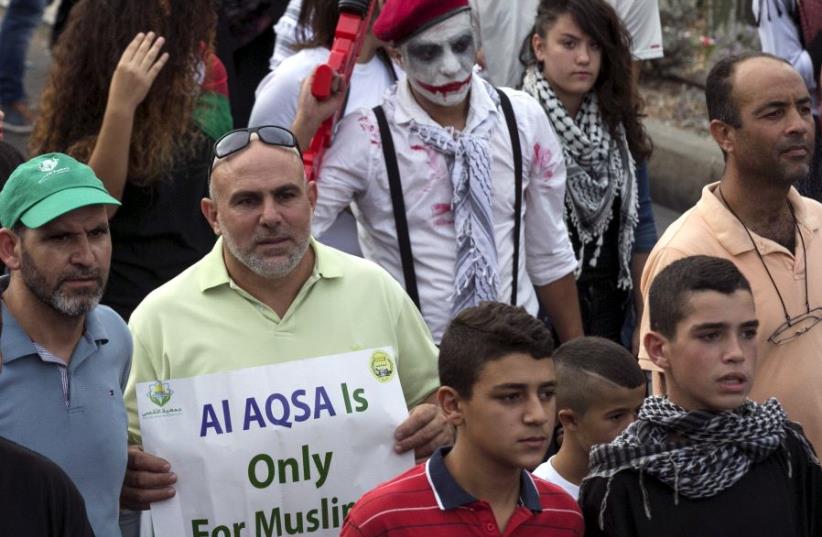 Israeli Arabs take part in a pro-Palestinian rally. One protester holds a sign stating "Al-aqsa [Temple Mount] is Only for Muslims"
(photo credit: REUTERS)
Advertisement
More than half the asylum seekers in Bavaria subscribe to classic antisemitic views about Jewish power, according to a poll released last week.The study, conducted by the Hanns Seidel foundation – a think tank affiliated with the Christian Social Union party in the southern state of Bavaria, polled nearly 800 refugees during 2016 from the Bavarian cities of Nuremberg, Poing und Pliening. Their countries of origin are Syria, Eritrea, Iraq and Afghanistan. “More than half of Muslim asylum seekers showed clear tendencies of an antisemitic attitude pattern,” wrote the authors of the 201-page study examined by The Jerusalem Post.When asked by the investigators if “Jews have too much influence in the world,” 52% of Syrians said yes, while 53% of Iraqis agreed with the statement. Nearly 60% of Afghans said Jews wield too much influence, while a mere 5.4% of those from Eritrea – a Christian-majority country – held antisemitic views. Some Eritreans said they were familiar with Jews from the Bible.The number of Germans who affirmed the antisemitic statement about Jewish influence was 20%. In April, however, a new German government report revealed 40% of the German public hold a modern antisemitic view: the hatred of Israel.The Seidel study said “the decisive factor that explains antisemitic opinions is one’s religious group. Antisemitism in all age groups and educational background of Muslim asylum seekers,” is anchored in the educational system of the refugees’ countries of origin. A Syrian refugee named Mustafa said that “In Syria we were taught to hate a Jews a little bit. The government presented Jews as bad [people] who kill...”According to the study, there are “emotional prejudices against Israeli families from the side of the refugees.”
The study also polled the refugees about their views toward women, the reasons they fled their homelands, and whether they wish to remain in Germany.In 2015, a German intelligence report on the absorption of refugees and migrants stated: “We are importing Islamic extremism, Arab antisemitism, national and ethnic conflicts of other peoples as well as a different societal and legal understanding.”The document added: “German security agencies... will not be in the position to solve these imported security problems and thereby the arising reactions from the Germany’s population.”A senior level security official said, “The high influx of people from all parts of the world will lead to instability in our land.”
The official added, “We are producing extremists through immigration. Mainstream civil society is radicalizing, because the majority don’t want migration and they are being forced by the political elite.”