“Anti-Semitism is not a problem of the Jewish people, it’s a problem of human rights, and as such should be confronted.” 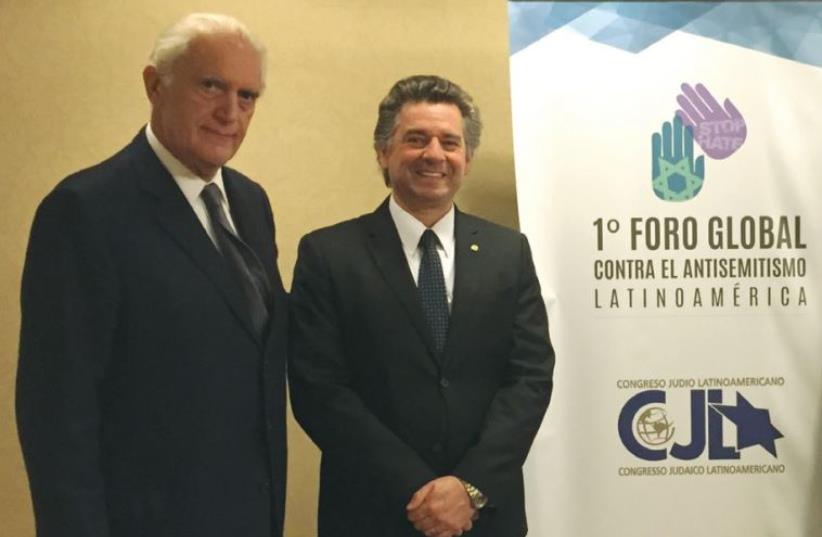 POLITICAL LEADERS attend the Global Forum for Combating anti-Semitism in Latin America, in Buenos Aires, on Monday.
(photo credit: ISRAEL ALLIES FOUNDATION)
Advertisement
More than 200 Jewish and Christian leaders from Israel, the United States, and 17 Latin American countries came together in Buenos Aires to launch the first Global Forum for Combating anti-Semitism in Latin America.The religious and political leaders, who met Monday, have crafted an action plan to combat anti-Semitism in the region. The plan includes recommendations in four areas in the battle against anti-Semitism: Internet and media, education, inter-religious dialogue, and legislation and law enforcement. These recommendations are in addition to those put forward by the previous Global Forum for Combating anti-Semitism, which was held in Jerusalem in 2015.The event was organized by the Israel Allies Foundation, the Latin American Jewish Congress, the Hispanic Israel Leadership Coalition and Israel’s Foreign Ministry. The organizers met with leaders and organizations from a variety of denominations in Latin America with hopes of garnering further support for the Jewish people.Sammy Eppel, co-chairman of the Global Forum for Combating anti-Semitism, spoke at the event on the importance of understanding the heart of bigotry against the Jewish people.“Anti-Semitism is not a problem of the Jewish people, it’s a problem of human rights, and as such should be confronted,” he said.“This is the first time that we have seen a big event with Christian and Jewish organizations and political leaders united for an important cause like the fight against the anti-Semitism and discrimination,” said Leopoldo Martinez, Latin America director for the Israel Allies Foundation.The group convened in front of Buenos Aires’s Jewish Community Center (AMIA) building to commemorate the 22nd anniversary of its bombing and destruction in 1994 that killed 85 people and wounded more than a 100. Authorities of the Argentinian government and survivors attended the event that purposely began at 9:53 a.m., the exact time the bomb exploded.Argentina’s vice president and its minister of social development represented the country at the event, which included Christian organizations, such as the International Christian Embassy of Jerusalem and the Evangelical Confederation of Latin America, UNICEF and Jewish communities from Brazil, Chile, Colombia, Panama, Peru, Uruguay and Venezuela.The Latin American Jewish Congress is a regional branch of the World Jewish Congress, which represents Jewish communities in 100 countries to governments, parliaments and international organizations.The Israel Allies Foundation is an umbrella organization that coordinates the work of more than 30 Israel Allies Caucuses around the world in order to mobilize political support for Israel based on shared Judeo-Christian values. This network includes the European Union Parliamentary Israel Allies Caucus, the Congressional Israel Allies Caucus, the Knesset Christian Allies Caucus and a number of caucuses in Latin America.The Knesset Christian Allies Caucus will be hosting an event at the Knesset on Monday to monitor the progress of work to undermine efforts to boycott, divest from and sanction Israel. Several MKs in the caucus will speak at the event.