Five headstones were discovered knocked off their bases at the Adath Jeshurun Cemetery in the Frankford neighborhood. 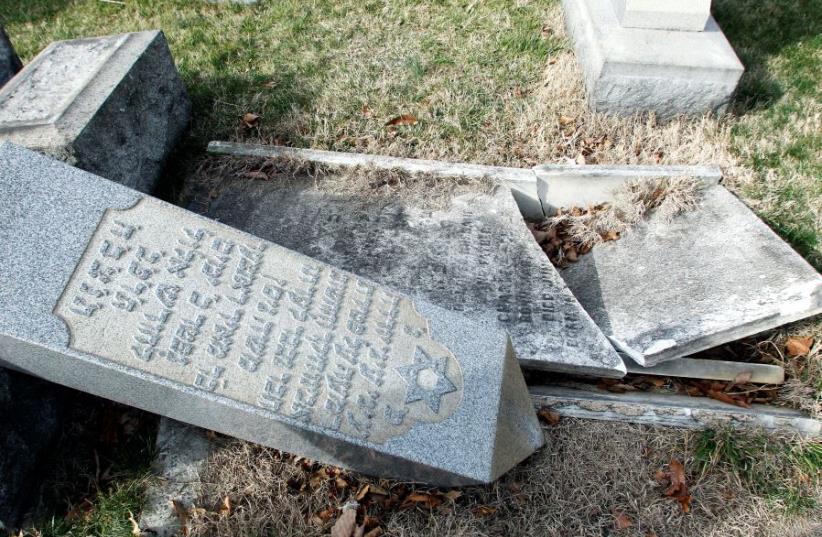 A headstone, pushed off its base by vandals, lays on the ground near a smashed tomb in the Mount Carmel Cemetery, a Jewish cemetery, in Philadelphia, Pennsylvania, US February 27, 2017.
(photo credit: REUTERS)
Advertisement
Gravestones were toppled at a Philadelphia Jewish cemetery, the second time a Jewish cemetery in the city was vandalized this year.Five headstones were discovered knocked off their bases at the Adath Jeshurun Cemetery in the Frankford neighborhood, in the northeastern part of the city. The gravestones were not defaced by graffiti, according to the news website Philly.com.Police reportedly do not have any suspects. The cemetery, which is more than 160 years old, does not have surveillance cameras. The groundskeeper, who first noticed the vandalism, lives on the premises.


Police told the CBS Philadelphia affiliate that it was clear that the stones were pushed over and did not fall due to age or weather.In August 2015, at least 124 tombstones were toppled in the same cemetery, which has only a few burials a year.In February this year, some 175 headstones were toppled at Philadelphia’s Mount Carmel Cemetery.