A recent survey conducted by Chabad.org reveals that in 2017 more than one million pounds of handmade traditional round matza will be produced in the US alone. 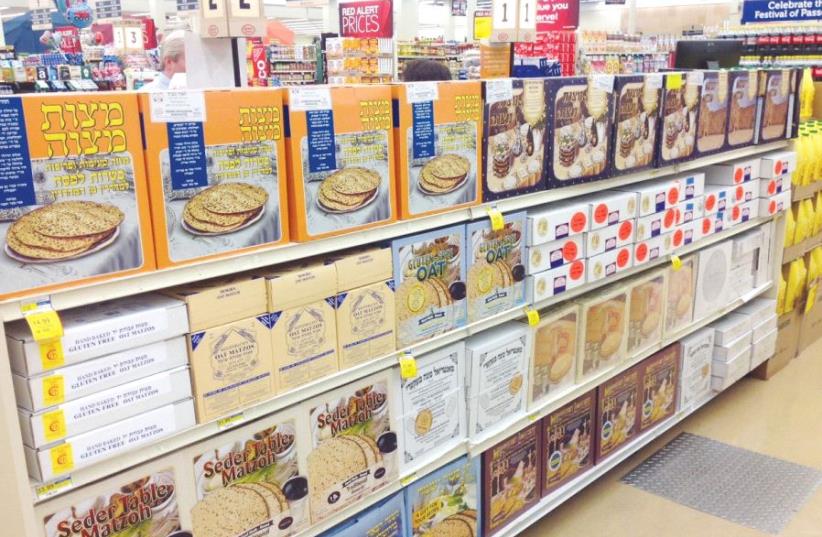 ‘SHMURA’ MATZA WHOLESALER Yossi Frimerman said, ‘It’s the closest you’ll get to what our ancestors had when they came out of Egypt.’
(photo credit: CHABAD)
Advertisement
As Passover approaches and boxes of matza start hitting the supermarket shelves across the United States, the options seem endless: egg, whole wheat, rye, onion-flavored, chocolate-covered and many others. But in recent years, American consumers have been going back to basics: shmura matza, the hand-made kind used by the strictly observant.According a recent survey conducted by Chabad.org, in 2017 more than one million pounds, or 450,000 kilograms of the handmade traditional round matza will be produced in the United States alone. This is part of a larger trend: the demand for it has grown significantly over the past 60 years.“Everybody wants to have a piece of it,” Yossi Frimerman, a shmura matza wholesaler in New York City, told The Jerusalem Post. “It’s the closest you’ll get to what our ancestors had when they came out of Egypt.”
Passover Pesach 2015 Seder Rube Goldberg Machine from Technion in Israel
Frimerman begun distributing shmura matza some 40 years ago. At the beginning, he was importing only one container to the United States, the equivalent of some 10,000 pounds or 4,500 kilograms.“Today I do a lot more than that, a whole lot more than that,” he said. “And I’m not the only one who does it; there are many companies that are now doing it. When I started it, was just me and another fellow that brought in matza from Israel.“There is a lot of matza being imported and there are a lot of new bakeries here in America that are producing,” he explained. “It’s demand-driven.”In the first years of his business, Frimerman used to sell matza directly to consumers, but as the trend grew, he began selling to food distributors and large supermarket chains.Shmura matza’s popularity started to rise in the early 1950s, when the late Lubavitcher Rebbe, Rabbi Menachem M. Schneerson, spoke about the importance of eating it on Passover. He insisted it be available to Jews around the world and encouraged his Chabad emissaries to distribute it in their communities.Seventy-six-year-old Yerachmiel Andrusier, who has lived in the Crown Heights section of Brooklyn for over 50 years, has seen the craze grow over his lifetime.“People don’t use it for the taste, they use it because of tradition,” he said. “And some people feel that machine-made matza is not baked that carefully.”But the desire for it goes way beyond the Orthodox community, Frimerman told the Post.“I sell tens and tens of thousands of pounds of matza to Costco or Shoprite or [other] chains here in the United States,” he said. “They are not catering to the Orthodox community, they are catering to the general Jewish population.”Upholding the tradition, however, comes with a price tag. Prices can range from $15 to $40 for a box of six large, handmade matzot.“In the machine-made matza, there are two ingredients: flour and water. But in the handmade matza, there are three ingredients: flour, water and labor,” Frimerman explained. “Obviously, labor is very expensive.“I know families in Crown Heights that have 10 kids and they would buy 40 to 50 pounds,” Andrusier told the Post. “Unfortunately, usually these people who have big families can’t afford it.”In an attempt to counter this issue, Frimerman has also been importing shmura matza made in other countries, such as Israel and Ukraine, where labor is cheaper