The rabbi was buried in a cemetery that was destroyed during the Holocaust. The school was built on the former ground of the cemetery. 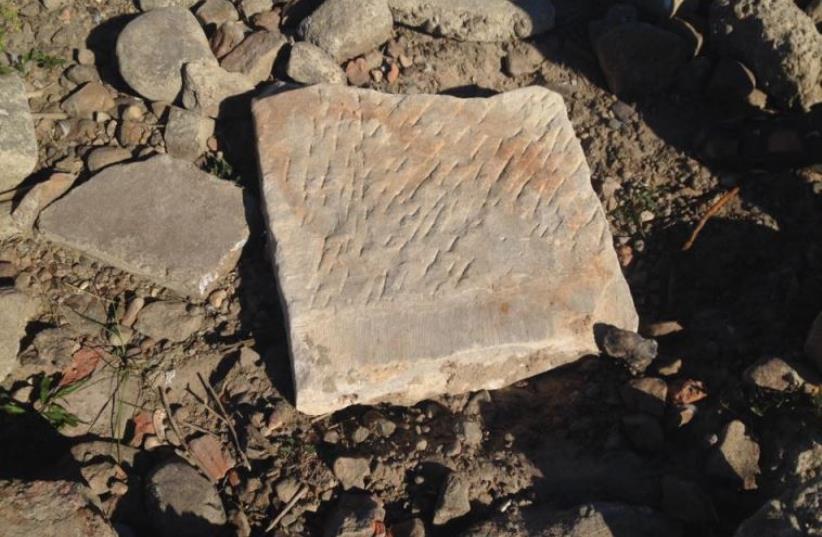 Fragment of Jewish tombstone found in Vistula River
(photo credit: COURTESY OF FROM THE DEPTHS)
Advertisement
A schoolyard in Poland that was built on what is believed to be the grave of a prominent 19th-century rabbi has become the site of an unofficial pilgrimage, the Israel Broadcasting Corp. reported.Haredi Orthodox followers of the Modzitz Hasidic dynasty, which is based in Israel, discovered in 2013 that the movement’s founder, Rabbi Yehezkel of Kuzhmir, was buried in what is now a public school in Kazimierz Dolny in eastern Poland, according to the report Sunday.The rabbi was buried in a cemetery that was destroyed during the Holocaust. The school was built on the former ground of the cemetery.The pilgrims arrive regularly in small groups to pray in the middle of what is now a soccer field inside the school. They bribe security guards to enter, according to the report, but sometimes they are turned away.Shlomo Hirsch Taub, a prominent rabbi in the Modzitz, told the Israeli television crew that locals “deliberately try to prevent worship.The Modzitz rabbis have appealed to the J-nerations group, which specializes in the rescue of Jewish burial places in Poland, to negotiate with local authorities to regulate worship at what the worshippers say is Rabbi Yehezkel’s grave.A resident who lives near the school said that floods from the school carry bones downhill. The resident, who was identified only as Sonia, said she regularly buried the bones that she finds after heavy rains.“The city says the Nazis are responsible for this crime,” Taub said. “Let’s suppose that’s true. But do they want to perpetuate it?”The Modzitz yeshiva is demanding that the grave be made into a protected place of worship and declared a sacred site.Across Eastern Europe, hundred of Jewish cemeteries were destroyed by the Nazis and built over by communist authorities. In Lithuania, some members of the Jewish community are trying to prevent the construction of a conference hall on what used to be the Snipiskes Cemetery in Vilnius, the capital.