Hundreds of teens gather in Ukraine for leadership conference 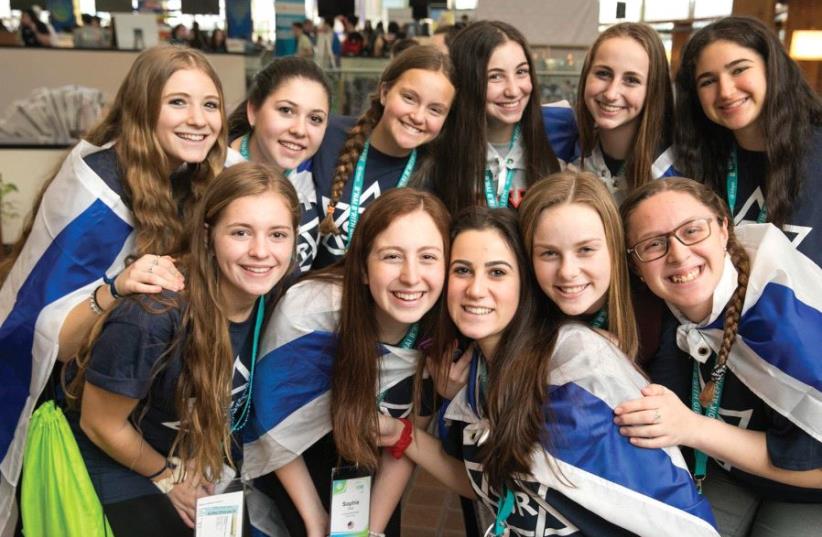 Teenage girls smile while attending the BBYO international convention in Dallas.
(photo credit: JASON DIXSON)
Advertisement
Some 350 Jewish teenagers and young adult leaders from the former Soviet Union gathered in Kharkov, Ukraine, over the weekend at a conference aimed at strengthening Jewish life across the globe.The American Jewish Joint Distribution Committee’s fourth annual Active Jewish Teens (AJT) Conference was attended by participants from JDC and BBYO youth networks in Ukraine, Russia, Belarus, Georgia, Moldova, Kazakhstan, Latvia, Estonia and Israel. For the first time, American teenagers in BBYO joined as part of JDC and BBYO’s global partnership, which is focused on building a worldwide movement of Jewish young people.According to the JDC, the annual conference is the largest gathering of Jewish teenagers from the former Soviet Union.“It’s nothing short of miraculous that in just one generation since the fall of Communism, these teens are proudly exploring and embracing their Jewish identity and building new avenues for Jewish life through innovative projects, volunteerism and meaningful leadership roles,” JDC CEO David Schizer said. “We can be quite proud of the role we have played in making this dream – of impassioned young Jews dedicated to Jewish community and the wider Jewish world – a reality, and to have partners like BBYO to support the robust engagement of local teens from Ukraine to Latvia.”The conference was focused on Jewish values and featured more than 100 workshops on subjects ranging from tikkun olam (repairing the world) to mutual responsibility, Jewish law and custom, volunteerism and contemporary interpretations of classic Jewish texts.In one session, five teens were given the opportunity to present grassroots projects which they want to implement in their community. The winner will receive a small grant from a committee made up of donors and a JDC representative to jump-start their effort.“As AJT president, I have learned that creative thinking, good communication and effective time management are key to getting things done,” said 18-year-old AJT co-president Dima Arutynov. “But for me, the most important thing that AJT has given me is a strong connection to Jewish culture and Judaism. It is this connection to my Jewish heritage that is my source of inspiration and motivation to continue working on behalf of my community now and in the future.”Participants at the event included AJT teachers, graduates of JDC’s flagship Metusda leadership program, directors of youth clubs and well-known local and Israeli educators.“No matter where in the world, when teens are given the opportunity to build their own experiences and create their own community, they usually exceed their own lofty expectations” BBYO CEO Matt Grossman said. “Their optimism and creativity are writing a new history for Jewish organizations and Jewish life.”AJT’s network connects more than 3,000 teenagers through local chapters in 57 cities across the former Soviet Union.