The Hebrew University stands to benefit from the latest sale, since Einstein bequeathed his estate, including the use of his image, to the Jerusalem institution. 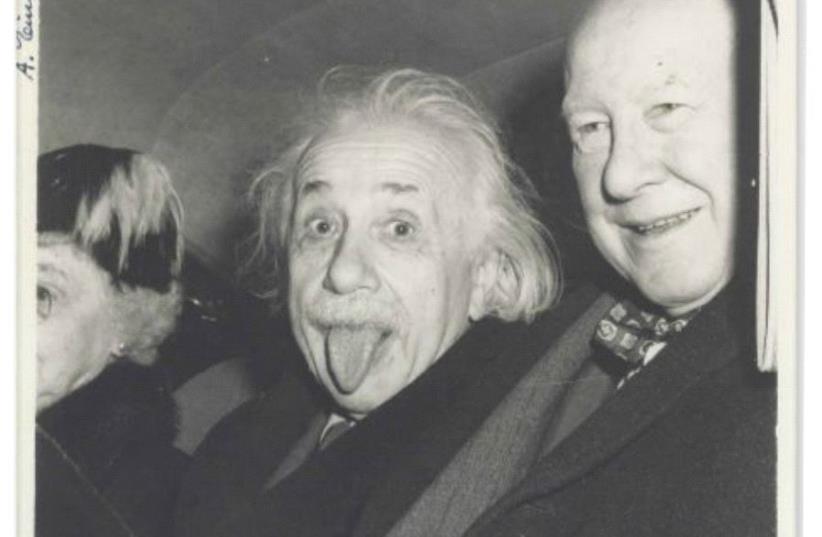 Iconic Albert Einstein 'tongue' photo
(photo credit: NATE D. SANDERS AUCTIONS)
Advertisement
A famous photo of Albert Einstein sticking out his tongue at a photographer and signed by the renowned scientist has been sold for $125,000.The Nate D. Sanders auction house in announcing the sale Thursday evening did not reveal the buyer’s identity.The Hebrew University stands to benefit from the latest sale, since Einstein bequeathed his estate, including the use of his image, to the Jerusalem institution.United Press International photographer Arthur Sasse took the picture on March 14, 1951, while covering Einstein’s 72nd birthday party given by his colleagues at the Institute for Advanced Study in Princeton, New Jersey. Einstein had tired of smiling for photographers at the party, and when Sasse renewed the request, the scientist instead stuck out his tongue.UPI editors initially hesitated to publish the irreverent photo, but when they did Einstein was so amused, he ordered nine prints to give to close friends.The $125,000 selling price, which equaled the minimum bid level set by the Los Angeles auction house, reflected the value placed on a photo bearing Einstein’s signature. While the photo is generally shown cropped with only Einstein in the picture, the auctioned version represents the original, with Einstein seated between his hosts, Dr. Frank Aydelotte, head of the Institute for Advanced Study, and his wife.The 7-by-10-inch photo was on the market in 2009, when it was sold at auction for $74,324.Einstein’s March 14 birthday continues to be celebrated in Princeton as Pi Day because the 3/14 date corresponds to 3.14, the first three digits of the mathematical constant pi.Einstein, who died in 1955, assisted numerous Jewish institutions and organizations during his lifetime, including the Jewish Telegraphic Agency. In the 1930s and ’40s, he helped to raise money for the global wire service, was photographed inspecting its printing press and carried on a correspondence with JTA founder Jacob Landau.Einstein’s name has retained its universal recognition as a synonym for supreme intelligence. The National Geographic television channel has just concluded airing a miniseries titled “Genius,” with Geoffrey Rush and Johnny Flynn as the older and younger Einstein, respectively.