Israeli ambassador calls on mayors to reject BDS conferences in their cities. 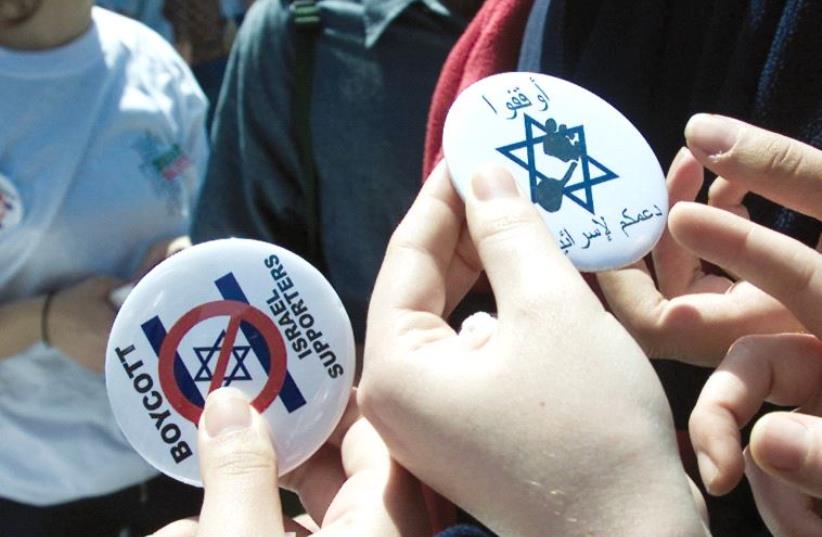 Boycott Israel
(photo credit: REUTERS)
Advertisement
PARIS – Israel’s ambassador to France is asking the country’s mayors to reject events in their cities as the French branch of the anti-Israel BDS movement launches “Israeli Apartheid week” on Tuesday under the slogan “100 years of occupation/ 100 years of popular resistance for justice,” referring to the 1917 Balfour Declaration.“The 2017 edition of this annual meeting reveals the true face of the BDS movement: that of antisemitism, anti-Zionism and anti-Israel,” Aliza Bin-Noun wrote in an open letter to French mayors published on Friday. “By presenting the entire country as a ‘colony,’ the BDS tries to delegitimize Israel as the homeland of the Jewish people, contrary to other governments, like the French and the British, who recognized and approved Israel as such.”She warned that such events could disturb public order, especially against the backdrop of the current state of emergency in France.
Police scuffle with protesters at pro-Palestinian beach demo in Paris
Bin-Noun told The Jerusalem Post the embassy is working against BDS on two levels; first by curbing its activities, and second by promoting the Israeli narrative.“Concerning the first category of actions, we constantly approach decision makers, heads of universities, mayors and others to not open any windows to BDS events,” she said. “We do it all year long, not just ahead of this Apartheid Week. On the other hand, we work diligently to advance academia cooperation programs between Israel and France, French-student delegations to Israel and more.”Bin-Noun said the embassy puts a lot of effort into maintaining French law, according to which boycotting is illegal.“The French law [on boycott] constitutes a very strong basis against BDS campaigns,” she said. “BDS activists are acutely aware of that. They know that they must be very careful about what they do and how they operate. Our friends in the Senate managed to break down attempts last July to amend the law. We are also operating among mayors who are friends of Israel, for them to state, at least on the declarative level, that they object to any attempts to boycott Israel.”The embassy is not alone in its efforts to put a damper on the BDS activities.Representatives of the CRIF – the French Jewry umbrella organization – told the Post it has launched calls on social networks to engage its members against BDS meetings in the various cities.Aside from featuring the ambassador’s letter on its Facebook page, the CRIF also disseminated its messages on its Twitter account against Apartheid Week in both France and the UK.Sacha Gozlan, president of UEJF, the French Jewish students organization, told the Post he and his friends are petitioning the universities to not hold BDS events and also are working to reestablish the link between French students and Israel.“We are organizing a delegation of 10 Israeli students who should arrive here on March 12 to meet with students at the same universities where the BDS is trying to get a hold, especially the Paris 8 Saint Denis University,” he said. “This way, we are hoping to uproot BDS from French campuses.”Running from March 6 to March 18, Apartheid Week events will take place at universities in large French cities, such as Paris, Marseille, Lyon, Montpellier, Lille, Toulouse, Grenoble and Rennes, as well as smaller locales such as Saint-Nazarine. They will kick off with a seminar at the Paris 8 Saint Denis University with the participation of two BDS activists from abroad.Groups in the US, Europe and Africa (mostly South Africa) are holding similar events in March and April. According to the BDS website, 225 cities held Apartheid Week events in 2016. The first Israel Apartheid Week was held in 2005.