Statues of Gandhi and Kallenbach have been placed near a historic synagogue on a river bank in the small western town of Rusne, near the Russian border. 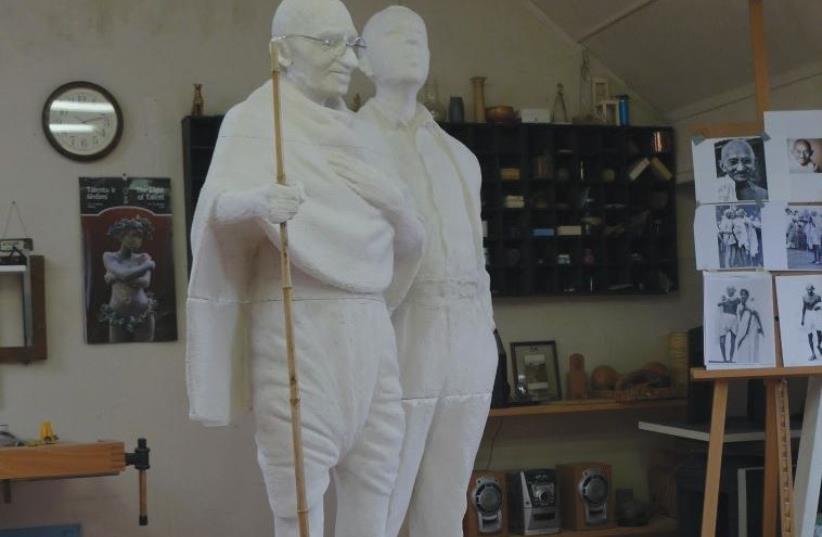 THE STATUES of Mahatma Gandhi and Hermann Kallenbach due to be unveiled on October 2
(photo credit: COURTESY LAIMONAS TALAT-KELPSA AND AVSHALOM LEVI)
Advertisement
Israeli researcher Shimon Lev smiles as he recalls receiving an invitation to the unveiling of what has been called “a monument of friendship” between Mahatma Gandhi and his Jewish friend Hermann Kallenbach, in Lithuania on October 2.Lev, who is completing his doctorate at the Hebrew University of Jerusalem on perceptions of India in the Jewish world, is the author of a book about the special relationship between the two men, called Soulmates: The Story of Mahatma Gandhi and Hermann Kallenbach.Among those attending the unveiling of the statues followed by a ceremony at the recently constructed royal palace will be Prime Minister Algirdas Butkevicius and other Lithuanian dignitaries, as well as Gandhi’s grandson Gopal Krishna Gandhi, and great-grandson Tushar Gandhi.The statues of Gandhi and Kallenbach have been placed near a historic synagogue on a river bank in the small western town of Rusne, near the Russian border, where Kallenbach, a wealthy architect who befriended Gandhi a century ago in South Africa, was born in 1871.Asked how he was invited to the event, Lev says he was “very happy” when he got an email from the Lithuanian ambassador in New Delhi, Laimonas Talat Kelpsa, inviting him to give a talk on the friendship between Gandhi and Kallenbach.“For the past six or seven years, I have been studying and lecturing on the subject, and eventually published Soulmates, about the story of Mahatma Gandhi and Hermann Kallenbach,” Lev says. “So I don’t want to take full credit, but somehow the story of this unique relationship came into the public consciousness, and because of that, the Lithuanian government decided to commission these statues.”Soulmates, published in 2012, was based on documents and letters contained in the Kallenbach archive in Haifa, then under the possession of his great-niece, Dr. Isa Sarid, who coauthored a 1997 biography of her uncle with Christian Bartolf.After Sarid’s death in 2012, they were sold to the Indian government.While Kallenbach never married or had children, Lev tracked down his great-nephew Eli Sarid, who lives in Tel Aviv and will also attend the ceremony.According to Lev, Gandhi and Kallenbach probably met in Durban in 1903; Kallenbach was 32 and Gandhi 34. Gandhi himself said they soon became “soulmates,” and lived together for several years in Johannesburg and then on the nearby Tolstoy Farm, a 1,000-acre commune owned by Kallenbach.“Somehow they became very close friends,” Lev says. “There were two dimensions to their friendship, practical and psychological.On the one hand, Kallenbach provided practical help for Gandhi’s passive resistance struggle in South Africa, financing, organizing and establishing Tolstoy Farm in 1910, living there together, conducting the Great March in 1914 and being arrested together. But I think the most important thing is that Kallenbach became a very personal, intimate friend with whom Gandhi could really communicate and reflect.Gandhi also used Kallenbach as a kind of ‘wailing wall’ for all of his problems with his wife and children, which were many.”After Gandhi moved to India, where he became the leader of the Indian independence movement, the two men continued to write letters to each other. At the request of Moshe Sharett, who was later to become a prime minister of Israel, Kallenbach visited Gandhi in India in 1937 and 1939 to enlist his support for Zionism.“Gandhi objected to Zionism, but he really supported Kallenbach’s personal commitment to Zionism,” says Lev. “As young men, they lived together for a significant period in their lives on Tolstoy Farm outside Johannesburg, which was very similar to the cooperative kibbutz. This was the happiest time in their lives. When Kallenbach came to visit Gandhi in India in 1937 and ’39, he wanted to emigrate to live on a kibbutz, and Gandhi really supported it. You can see this in his letters. So there’s a gap between Gandhi’s public objection and his private support. And from what I have heard, Gandhi was the one who convinced Kallenbach to leave all his money to the Zionist movement, to Keren Hayesod. Kallenbach wanted to give it to Gandhi, but Gandhi said, ‘You should give it to your own people, especially after the Holocaust.’” After his death in 1945, Kallenbach’s niece Hanna Lazar brought his ashes to Israel for burial on Kibbutz Degania.Gandhi was buried three years later after being assassinated in New Delhi.“Surprisingly enough, the main connection between the Indian national movement and the Zionist national movement was made via Kallenbach,” Lev says. “Next year will be a historic one for both countries with the first-ever visit of an Indian prime minister, Narendra Modi, to Israel.”The statues of Gandhi and Kallenbach, cast in bronze, were made by a famous Lithuanian sculptor named Romualdas Kvintas. The money was raised by Lithuania’s ambassador to India, with the main sponsor being the Yusuf and Farida Hamied Foundation, based in London. Dr. Yusuf K. Hamied, a Muslim who was born in Vilnius in 1936, is the owner of one of India’s largest pharmaceutical companies, Cipla. The monument will also be a tribute to the memory of his Jewish mother, Luba Derczanska.