Immigrants escaping the fighting in Ukraine could require extended stays in absorption centers to deal with the issues brought about by surviving war. 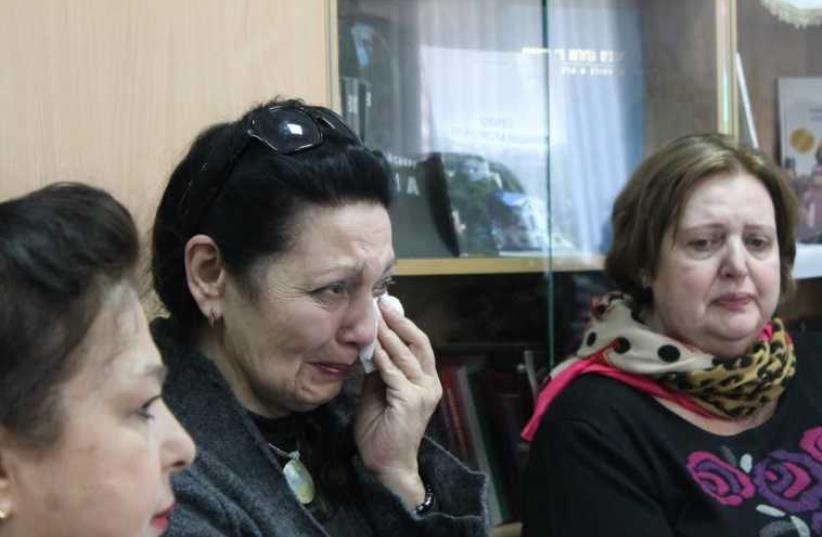 Jewish refugees from eastern ukraine cry as they recount their stories of escape during a gathering in Kiev just before passover.
(photo credit: SAM SOKOL)
Advertisement
The Jewish Agency has had to make internal adjustments in order to deal with the needs of prospective immigrants fleeing their homes in war-torn Ukraine, according to senior officials involved with these efforts.Roman Polonsky, director of the agency’s Unit for Russian- Speaking Jewry, and Bilana Shakhar, who is responsible for aliya and Israel experiences in the former Soviet Union, told The Jerusalem Post this week that the war has forced several changes in how they prepare prospective immigrants. This is because of the very short period of time available for those escaping from conflict areas.More than three quarters of the rebel stronghold of Donetsk’s pre-war population of 10,000-11,000 have fled since the fighting began in earnest last summer. More than 7,000 Jews have moved to Israel from all over the country in the last year and a half.“We are doing all needed internal adjustments [so that] no one who wants to come to Israel will be abandoned [and so they can] receive all needed help,” Polonsky told the Post.Aside from promoting and facilitating immigration to Israel, the Jewish Agency is also serving “vulnerable and shaken communities” through summer camps, Sunday schools, and other programs, he said, adding that participation in MASA Israeli experiences has surged to over a thousand students.“We are dealing with a new phenomenon of Jewish internally displaced persons [IDPs],” Shakhar said. “It means people are escaping from conflict areas [and] they don’t have a lot of time and in a very short period we have to provide them as much as we can [in terms of] information about the opportunities in Israel,” such as education and the labor market.She recalled one woman from Donetsk whom she met in the agency’s refugee transit center in Dnepropetrovsk, whose four-year- old daughter died due to the shortage of medicine in Donetsk.She “died in front of her mother” and the entire family – including her 10-year-old brother, will require psychological help once in Israel, which will complicate their integration.Such stories, Shakhar said, are common enough to require a new approach be taken toward those fleeing the war.Some immigrants, she said, will require extended stays in absorption centers to deal with the issues brought about by surviving war, as well as to make up for the lost time in preparing the olim for coming to Israel while they were in Ukraine.“We are adjusting specially to these kinds of problems. We will try to find them programs that can give them the opportunity for a more gradual [absorption] process.”According to Polonsky, emigration from Ukraine corresponds to the state of the war, with more people leaving when things heat up on the ground.“We see it in the dynamics of aliya clearly,” he said. “Where there is a relatively calm situation or hope for a cease-fire, we see drops in aliya; and when disappointment [increases] we see a large rise in aliya. It’s like the temperature of a very ill man with high peaks and huge drops and it reflects the mood of people in the field.”Many Ukrainians, he continued, find it difficult to move on, finding themselves in the limbo between not being able to go home and not being ready to go further.Just because people are looking to flee the war, “it doesn’t mean that the option of Israel is the first option that they think of,” he said. Therefore, the agency is increasing the number of aliya fairs, seminars, and groups of representatives from Israel significantly, Shakhar said. A recent aliya fair in Kiev brought together one thousand participants.The agency held 1,931 seminars in 2014, up by more than 200 from the previous year.Mass aliya events likewise rose from 11,746 in 2013 to 13,638 last year. More than 1,500 Ukrainians participated in ulpan classes in 24 cities during the 2014-15 academic year.The agency has also massively increased the number of Israelis it brings to Ukraine to represent academic institutions, companies, and municipalities interested in recruiting from this immigrant population, she added.