The incident marks the second time a Jewish cemetery in the US has been vandalized in the past week. 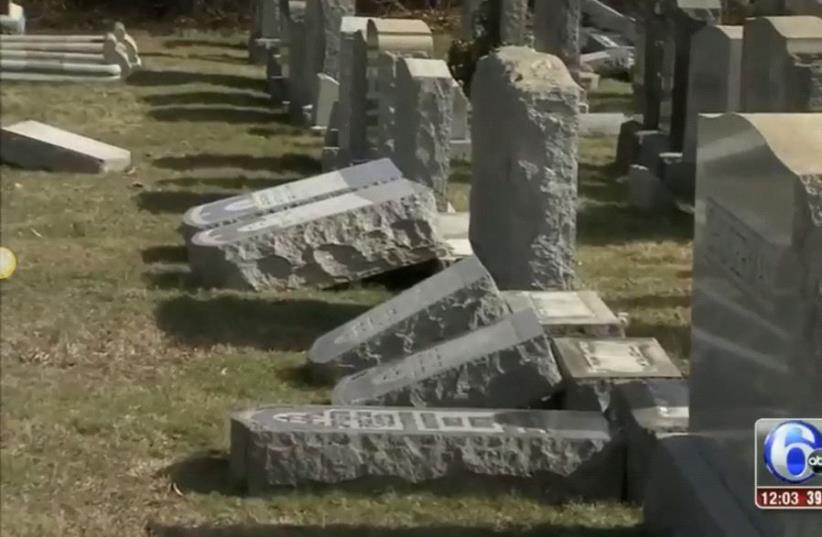 Gravestones damaged at Mt. Carmel Cemetery in Philadelphia , Pennsylvania , US
(photo credit: screenshot)
Advertisement
A Jewish cemetery in Philadelphia was found desecrated on Sunday with dozens of tombstones found overturned.Mt. Carmel Cemetery was the second Jewish funerary grounds targeted within a single week, after a cemetery near St. Louis suffered similar vandalism the previous weekend. US Vice President Mike Pence visited that site this week and vowed to fight the scourge of antisemitism with the weight of the White House.An ABC affiliate reporter in Philadelphia described dozens of headstones pushed over, if not more than a hundred.
Pence visits vandalized Jewish cemetery in St. Louis on Feb. 22, 2017 (credit: REUTERS)
Toppling Jewish tombstones is a storied antisemitic attack, raising few doubts within the community over the motives behind the vandalism.The Anti-Defamation League and federal and local agencies have warned of a historic spike in antisemitic incidents over the past year, and especially since the elections in November.New Jersey resident Aaron Mallin discovered the damage at the Mt. Carmel Cemetery while visiting his father’s grave, Philadelphia news outlet 6ABC reported.“It’s just very disheartening that such a thing would take place,” Mallin was quoted as saying. “I’m hoping it was maybe just some drunk kids.But the fact that there’s so many it leads one to think it could have been targeted.”Foreign Ministry spokesman Emanuel Nahshon condemned the attack. “Philadelphia Jewish cemetery desecration is shocking and a source of worry. Full confidence #US authorities catch and punish culprits,” Nahshon tweeted.The World Jewish Congress tweeted: “It’s just very heartbreaking.”On Saturday, swastikas and vulgar graffiti were discovered in Orchard Park, New York, near Buffalo. The Buffalo News said a dozen residents found their vehicles and property defaced with spray-painted swastikas and vulgar graffiti. The vandals also wrote racial slurs and Nazi symbols on playground equipment at South Davis Elementary School.Jerusalem Post staff contributed to this report.