Jewish continuity at the heart of Limmud FSU 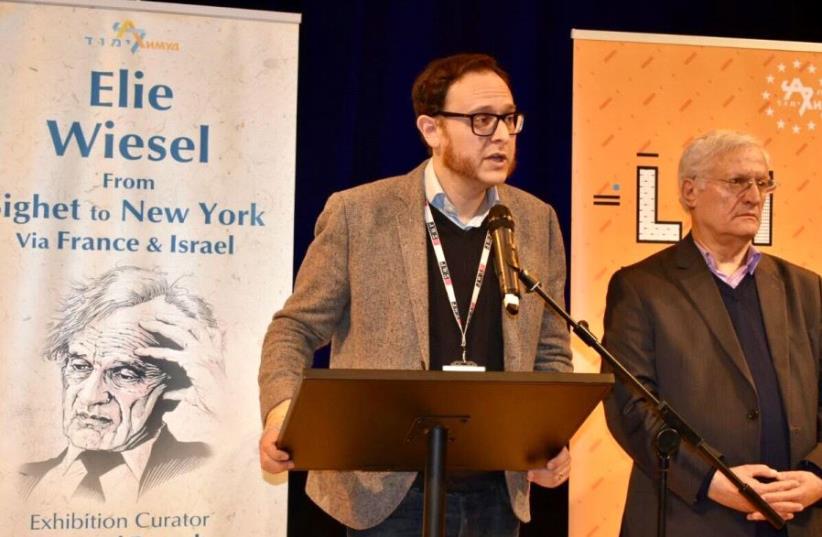 Elie Wiesel Exhibition at JW3
(photo credit: COURTESY LIMMUD FSU)
Advertisement
A photo exhibit honoring the life of Holocaust survivor and Nobel laureate Eli Wiesel opened in London this week, capping a threeday Limmud FSU educational conference in Windsor on the theme of Jewish continuity.“Wiesel fought all his life for the memory of the Holocaust, and Limmud is continuing this fight,” said curator Dr. Yoel Rappel, who on Sunday night launched the exhibition at London’s JW3 Jewish community center, in collaboration with Limmud. He added that “Limmud is fighting that Wiesel will remain as a model for us of how to be a very proud Jew in this world in the 21st century.”With a reference to Wiesel’s work for the freedom of Soviet Jewry, Rappel made the legacy of the late author and political activist particularly relevant to the some 700 Russian-speaking participants from some 20 European countries who attended the conference over the weekend.It was the first pan-European Limmud FSU conference, and featured more than 100 lectures, workshops, presentations and discussions by top world political, cultural, and Jewish figures.“It’s important for young people to come and learn about Wiesel, so we know that whatever he did we must continue,” said Rappel.“He didn’t finish the job – he did as much as he could. We have an obligation to continue the way of life of Eli Wiesel.”Jewish identity in the modern world was a key theme discussed in multiple sessions. On a panel titled “Why be Jewish in the modern world?” Limmud FSU president Aaron Frenkel, Russian Chief Rabbi Berel Lazar, US businessman and philanthropist Matthew Bronfman and Claims Conference executive vice president Greg Schneider discussed the importance of observance versus cultural and social activity.Schneider commented that, for some Jews, social action is an integral part of their Jewish identity. He pointed to the proud service of secular Jews in the IDF, and those Jews who protested the US refugee ban at international airports the week before, as enactors of Jewish values. “Their social action is being a Jew,” Schneider said, a point supported by Rabbi Lazar. “Standing up for someone’s right is Jewish” he agreed, while refraining from taking any stance on US President Donald Trump’s policies.Schneider said that Jewish identity is a mixture of the aforementioned values and observance, though he noted that the latter is what has perpetuated Jewish communities.All the panelists, whose discussion was moderated by JTA journalist Cnaan Liphshiz, agreed that Jewish identity should come from a place of joy. While acknowledging that some Jews connect to their heritage in reaction to a visit to Auschwitz or an antisemitic attack, Rabbi Lazar said educators should not use tragedies to rouse a person’s connection to their identity.In separate sessions, leaders of both the UK and the US Jewish communities addressed their countries’ booming haredi populations.In the UK, the young haredi population is projected to constitute 50% of the country’s population of Jewish children by 2031. President of the Board of Deputies of British Jews Jonathan Arkush said that currently the UK’s haredim “punch under their weight on communal issues,” having distanced themselves from communal organizations and politics.“But I think they’re might be a change,” he mused. “My concern is how it will affect the community’s relationship with the government, which is crucial,” he said.Malcolm Hoenlein, executive vice chairman of the Conference of Presidents of Major American Jewish Organizations, addressed the same trend in the US, expressing optimism about the community’s future. According to Hoenlein, “Haredim are becoming increasingly sophisticated in their ability to work with Congress.”The two were discussing the future of the Diaspora on a panel with renowned historian Deborah Lipstadt, author of the book Denying the Holocaust and the subject of the new film Denial.As the discussion turned to antisemitism, Lipstadt remarked that Holocaust denial is a manifestation of antisemitism and racism, referring to the distinction she has made between what she calls “soft core” and “hard core” denial. She said the former, which can be expressed via a “stripping of the Jewish identity of the Holocaust,” had been adopted by the Left in an “extreme fashion.”The three panelists agreed that in order to tackle antisemitism and other issues, building coalitions with other communities is essential.“We need people who will be with us and we need to be with them, and that includes people from the Muslim community,” Lipstadt stressed.For Chaim Chesler, founder of Limmud FSU, the subjects of antisemitism and Jewish identity were the most important in the conference’s wide-ranging schedule, which also covered discussions about politics, diplomacy and culture.“Fate had it that we are here, the day after the report on antisemitism came out,” Chesler told The Jerusalem Post, in reference to the Community Security Trust’s annual report on antisemitism, which on Thursday revealed the highest-ever levels of recorded antisemitism in the UK.“We’re here in the UK to show that we are ready to fight back. Unlike on the eve of WWII, we will not be silent,” Chesler said.