Eli Wiesel is a Holocaust survivor, human rights activist, Nobel Peace Prize laureate, an American professor and the author of 57 books. He is the author of the internationally acclaimed novel Night, an autobiography of his experiences in the Nazi German concentration camps at Auschwitz and Buchenwald in 1944–1945. Wiesel was born on September 30, 1928, in Sighet, present-day Romania, to an Orthodox Jewish family. His family was deported to Auschwitz when he was 15-year-old. His parents and younger sister perished in the Holocaust; he and his two older sisters survived. After the war, studied in Paris and went on to work as a journalist. In 1969, Wiesel married Marion Erster Rose. They had a son a 1972, who they named Shlomo Elisha Wiesel, after Wiesel’s father. In 1978, US President Jimmy Carter asked Wiesel to head the President's Commission on the Holocaust. In 1980, he became Founding Chairman of the United States Holocaust Memorial Council. For his human rights activism, Weisel has been awarded the Presidential Medal of Freedom, the United States Congressional Gold Medal and the Medal of Liberty Award, the rank of Grand-Croix in the French Legion of Honor. After he received the Nobel Peace Prize in 1986, his wife established The Elie Wiesel Foundation for Humanity.
Read More
Less

Despite knowing almost all the top authors in the world, the Nobel laureate’s greatest preference was for the Hebrew ones

This is the first congressional report mandated under the Elie Wiesel Genocide and Atrocities Prevention Act since it was signed into law in January 2019.

Poland and the Jews: Where we cannot compromise

No people has ever been more brutally massacred at any other time in history than the Jews under the Germans.

Jewish Agency Chairman Isaac Herzog, Israel envoy David Friedman, an international delegation of ambassadors led by Danny Danon, among other US ambassadors are participating in the march.

Close-up meeting with a Holocaust survivor

President Reuven Rivlin, in the lead-up to Remembrance Day for Holocaust Martyrs and Heroes, hosted Zikaron Basalon for the fourth consecutive year.

In an interview with the ‘Report,’ Elisha Wiesel, son of Elie Wiesel, explains that the March of the Living is essential to help students put the Holocaust into the narrative of Jewish history 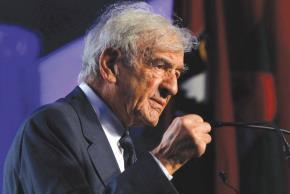 The law is intended to prevent genocide and other atrocities that threaten national and international security.

On the 90th anniversary of the writer’s birth, a four-year search led to the discovery of a manuscript that has never been published.

Learning from a legend

Ariel Burger details his own journey and his experiences working for Elie Wiesel in a new memoir.

Wiesel wanted to cover the Adolf Eichmann trial, but the editor felt that as an Auschwitz survivor, the trial would be too personal for him and he would not be able to write with objectivity.