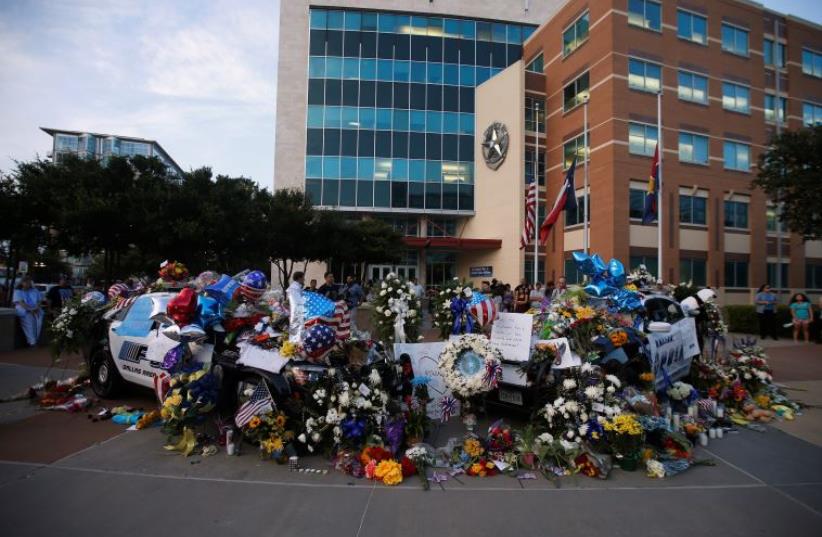 People attend a makeshift memorial at Dallas Police Headquarters following the multiple police shooting in Dallas, Texas, U.S.,July 8, 2016.
(photo credit: REUTERS)
Advertisement
“We are at a turning point here in the US” is a statement uttered by many Americans, following the recent violence in Dallas that left five police officers dead.“We know some of the operational steps,” says Drew Schwartz, an educational speaker who founded an educational program called “Gateway2change,” following the fatal shooting of Michael Brown in Ferguson, Missouri, and the ensuing riots in August 2014.“The question now becomes how we are able think about our history as Jews, as people who know the pain of being subjugated and mistreated, to take some positive steps.Michael Brown was shot and killed in the back yard where I taught,” Schwartz tells The Jerusalem Post, explaining the impetus for his program which brought together students from a wide range of ethnic groups and backgrounds.It has since expanded to other cities including Rochester, New York, where police have arrested dozens of protesters in Black Lives Matter rallies in recent days.Schwartz, who drew on his MA in conflict resolution in founding the program, explicitly set out to have students talk about “the elephant in the room – race – and ways to improve their society.”While his response to the recent tensions between the African-American community and law enforcement officials lies in education, others are looking to training methods and the very makeup of law enforcement bodies.The Anti-Defamation League, for instance, has called for “increased training for law enforcement, including implicit bias training that was announced by the Department of Justice recently.”“We need to build police departments with racial and ethnic makeups that mirror the communities they serve,” said Seth Marnin, ADL vice president of civil rights. “We need official statistics on police killings, tracking what happens and what has gone wrong each time. We pledge that we will work tirelessly on these and other systemic reforms so that when we proclaim ‘not one more,’ it is not just a hope but a promise.”The Simon Wiesenthal Center has for some 10 years been operating a training program for police officers from all over the world, including China, Japan, Russia, Canada, the UK and the US. The organization tailors the seminar to the specific problems faced in each country, and also provides follow-up after the officers complete their training.Consultant Brett Goldman, who has spent much of his career working in the US Jewish community, says that US Jewry today is highly fragmented, making a cohesive response to the issue difficult.“In the 1960s, the last time there was this much social upheaval, the Jewish community and the black community were arm in arm – this is that moment now,” asserts Goldman. “We’re either going to be on the right side of history or the wrong side, or we’ll let it pass us by. Some people say it’s not our [the Jews’] problem, but it is. This is our fight, this is our issue.”“I think there have been different types of responses,” Schwartz says, echoing Goldman’s sentiment. “Some Americans have gravitated toward the notion that as a Jewish people, we are very connected to the plight of African Americans who are being mistreated in a horrific way.“I’ve seen Jewish people stand up and be very explicitly involved in these protests,” he asserts. “I’ve also seen Jews shy away from those efforts because maybe they don’t feel comfortable, or they feel that by getting involved they are in opposition to police officers.It’s not mutually exclusive to support officers of law and to support African Americans and to say the system needs to change.”