The two Chicago-area families garnered worldwide attention and praise after a photo of them jointly protesting the Trump travel ban went viral. 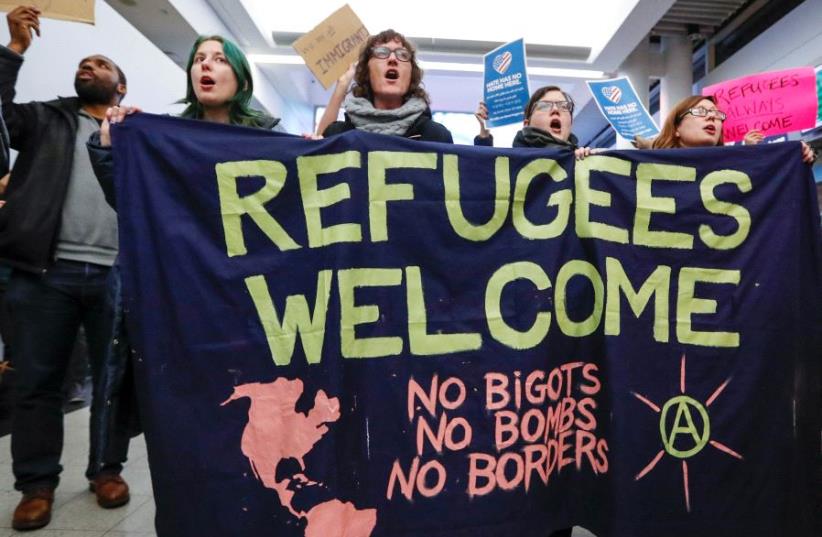 People protest against the travel ban imposed by U.S. President Donald Trump's executive order, at O'Hare airport in Chicago, Illinois, US January 28, 2017.
(photo credit: REUTERS)
Advertisement
The two families captured in a viral photo taken at Chicago’s O’Hare airport during a demonstration of President Donald Trump’s Muslim travel ban had a Shabbat meal together.The Yildirim family, who are Muslim, on Friday night joined Rabbi Jordan Bendat-Appell and his family for Shabbat dinner at their home in Deerfield, Illinois, the Chicago Tribune reported.The Yildirim family brought as a gift a drawing by their 7-year-old daughter, Meryem, of the photo that brought them together. The Bendat-Appells put it in a place of honor on the refrigerator, according to the report.

The photo, taken by Chicago Tribune photographer Nuccio DiNuzzo, shows a Jewish boy wearing a kippah and a Muslim girl wearing a hijab holding protest signs while they both sit on their fathers’ shoulders during the O’Hare protest.The families had exchanged contact information at the airport after talking about sharing a Shabbat meal in celebration of peace, the Tribune reported.Bendat-Appell and Fatih Yildirim told reporters the two had been discussing where to find a good kosher steakhouse when the photo was taken.Yildirim said that he has been criticized in Turkish media over the photo and that his family in Turkey has distanced themselves from it.The Yildirims reportedly invited the Bendat-Appells to their home for the next dinner.