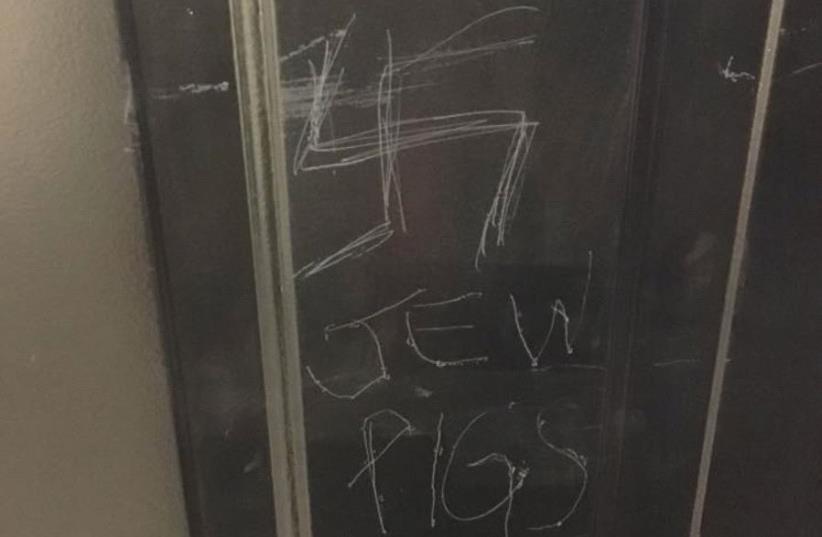 Antisemitic vandalism on the Virginia home of Mia Bermann.
(photo credit: MIA BERMANN)
Advertisement
Jews were the most targeted minority group for hate crimes in Canada in 2016, according to data released by Statistics Canada, the country’s main numbers-keeper.According to “Police-Reported Hate Crime, 2016,” released Tuesday, Jews were victimized 221 times, up from 178 the previous year, a rise of more than 20 percent. Blacks were next at 214 incidents and those victimized due to sexual orientation, 176.Jews also were the most targeted religious group, followed by Catholics and Muslims, despite perceptions of a rise in Islamophobia. Hate crimes against Muslims and Catholics declined in 2016 compared to the previous year.
Canadian Prime Minister Justin Trudeau says antisemitism present in Canada during National Holocaust Monument unveiling, September 27, 2017 (YouTube/Why?)
Police reported a total of 1,409 hate crimes in Canada in 2016, 47 more than in 2015.“While Canada remains one of the best countries in the world to be a minority, anti-Semitism and hate in all forms persist in the margins of society,” said Shimon Fogel, CEO of the Centre for Israel and Jewish Affairs.“We are alarmed by the overall increase in hate crime, the increasingly violent nature of these crimes, and the spike in incidents targeting the Jewish community,” he said.Friends of the Simon Wiesenthal Centre expressed similar sentiments.“Just this past month, we have witnessed swastikas being drawn on numerous buildings and even in front of a Jewish school north of Toronto,” CEO Avi Benlolo told The Canadian Jewish News.