The US Parole Commission announced Tuesday that Pollard will be released from prison after serving 30 years of a life sentence on November 20. 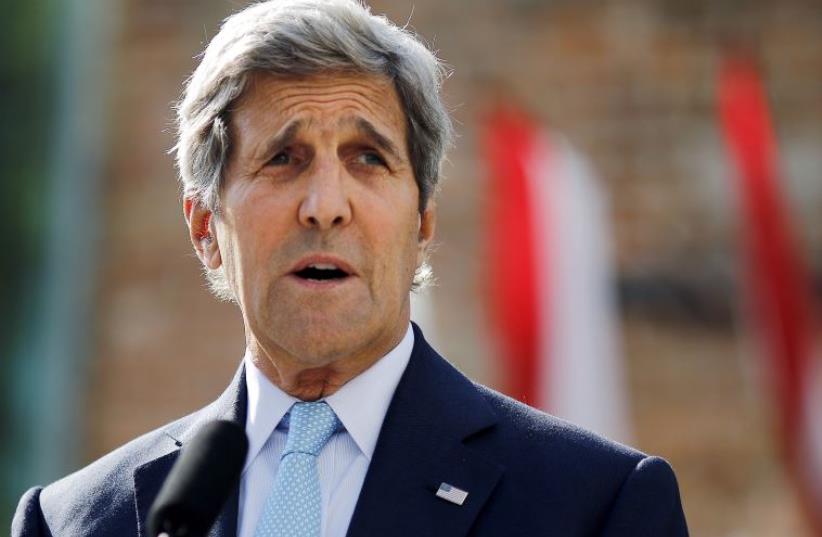 US Secretary of State John Kerry delivers a statement on the Iran talks in Vienna, Austria
(photo credit: REUTERS)
Advertisement
WASHINGTON - US Secretary of State John Kerry said on Tuesday the upcoming release of Jonathan Pollard, a former US Navy intelligence officer convicted of spying for Israel, was not tied to the nuclear agreement with Iran.Israel's leaders have strongly objected to the deal and there has been speculation that Pollard's release, scheduled for November, was arranged to help warm US ties to Israel despite that disagreement."I haven't even had a conversation about it. No, not at all," Kerry told reporters as he left a House of Representatives committee hearing on the nuclear agreement. The US Parole Commission announced Tuesday that Pollard will be released from prison after serving 30 years of a life sentence on November 20."I am looking forward to being reunited with my beloved wife Esther," Pollard said through his attorneys. "I would like to thank the many thousands of well-wishers in the United States, in Israel, and throughout the world, who provided grass roots support by attending rallies, sending letters, making phone calls to elected officials, and saying prayers for my welfare. I am deeply appreciative of every gesture, large or small."Had Pollard's parole been denied, he would have been required to serve an additional fifteen years in prison. His parole hearing took place July 7 at the Federal Correctional Center in Butner, North Carolina, where he has been incarcerated. He has been serving a sentence of life in prison for conspiracy to deliver classified information to the State of Israel.The Conference of Presidents of Major American Jewish organizations welcomed the news and echoed Kerry in denying a connection to the recent Iran deal.“We have long sought this decision and we believe this action is long overdue with Pollard serving a longer sentence than anyone charged with a comparable crime," the Jewish umbrella group said in a statement."We do not believe that there is any connection to the nuclear agreement with Iran. The parole date was set at the time of his sentencing and the current parole process proceeded the negotiations with Iran. These are separate and unrelated issues that should not be linked. We are grateful that he will soon have the opportunity to rebuild his life with his wife and address his medical concerns.”Gil Hoffman contributed to this report.