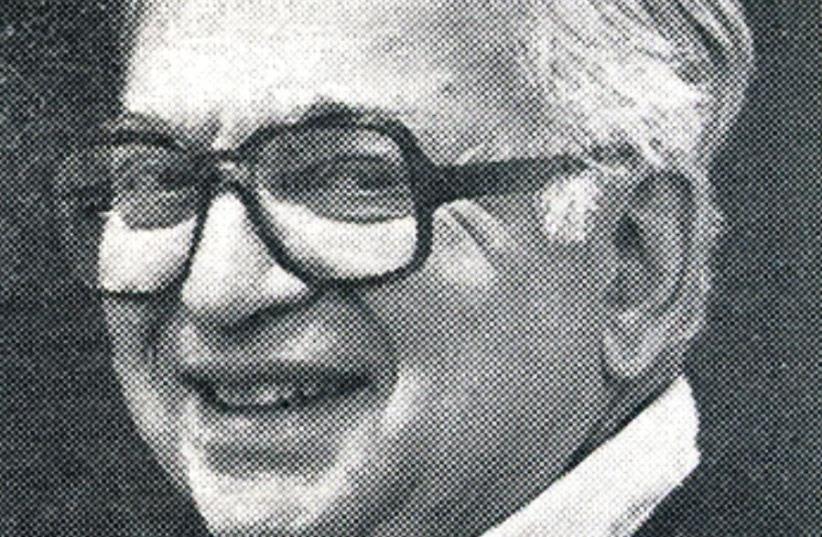 Jesse Zel Lurie
(photo credit: HADASSAH MAGAZINE/ JERUSALEM POST ARCHIVES)
Advertisement
Veteran American Jewish journalist and peace activist Jesse Z. Lurie died on the eve of Passover at the age of 103.In December 1932, Ted, one of his older brothers, was among the founding journalists of The Palestine Post, which later became The Jerusalem Post. Jesse followed Ted into the fourth estate, and was also on the staff of The Palestine Post. Ted became acting editor of the paper in 1955 when Gershon Agron, the paper’s founding editor, was elected mayor of Jerusalem. In 1959, following Agron’s death, Ted became the paper’s second editor- in-chief. He was also the Jerusalem correspondent for several publications in the US and UK.By this time, Jesse had long been back in America, from where he became a correspondent for what was still The Palestine Post. He also freelanced for other publications, and in 1947 he became the founding executive editor of Hadassah Magazine, a position that he held for 33 years. Until then the magazine had been run for 33 years by volunteers, but changing times and changing standards brought with them the need for a professional – and Lurie was the man of choice.Lurie traveled extensively in the Jewish world, including Soviet Russia, writing about people he met, the political situations in those countries and how they affected the Jewish population. At the same time he was an ardent campaigner for peaceful coexistence between Jews and Arabs in Israel, and was among those who supported the founding of Neveh Shalom, the cooperative village in which Arabs and Jews live and work side by side, proving that harmonious coexistence is both possible and desirable. As a member of the American Board of Neveh Shalom, he continued to support its endeavors throughout his life, and more than quarter of a century ago was largely responsible for establishing its primary school.As one who also supported and encouraged media diversity in Israel among Jews and Arabs, he created the Eliav-Sartawi Award for journalism in Israel. This was through Common Ground, an organization with which he was closely associated in his efforts to encourage conflict resolution in Israel. The award promotes better understanding of each other and each other’s cultures among Jews and Arabs in Israel and to foster ongoing political dialogue toward that aim.Notwithstanding diminishing eyesight and hearing, Lurie, almost until his dying day, wrote a blog on Middle East and Jewish affairs that was published in various mostly Jewish newspapers. He refused to allow physical disabilities to get in the way of things he wanted to do.In an interview organized with The Jerusalem Post during a visit to Israel in 2014, Lurie who could barely walk at the time, insisted that the interview take place at Moshav Mevo Modi’im, where his great-nephew Benjamin Terrell was performing at a Passover concert. Lurie had a tradition of coming to Israel each year for Passover.It was not only his age that made Lurie stand out from the crowd. He was wearing black, sexy short shorts, and amazingly his legs were smooth, without varicose veins or the creases of time. It was his first ever visit to the moshav and despite his mobility problems he wandered around the entertainment area, asking probing questions here and there, and also answered questions that were put to him. He didn’t believe that Prime Minister Benjamin Netanyahu is genuinely interested in reaching an accord with the Palestinians. “Netanyahu is only giving lip service to the peace process,” Lurie opined.He had a few more forceful things to say, but complained that “one of the disadvantages of being old is that no one listens.”Lurie was keen for Israel to establish more integrated schools in which Arabs and Jews study together. To the best of his knowledge, there were only six such schools in the country.As for Israel’s future, Lurie was sure it would remain secure, but was not overly hopeful of great progress on the peace front. “Israel has been living in a bubble for 20 years or more, and will continue to live in a bubble for some time,” he said.On the other hand, he continued, the Arab states are in such turmoil that no one knows what can happen there, “and tomorrow a suicide bomber can change things. There’s no way of predicting...”Lurie said he had been told some 30 or 40 years earlier that there are some problems that can’t be solved. “I didn’t believe it then, but it seems to be true.” For all that, he remained optimistic, because he was a great believer in tikun olam – fixing the world – a world which he said was slightly better than the world he came into.Born in Brooklyn on December 4, 1913, Lurie was one of six brothers. As an adolescent, he came with his parents to what was then Mandatory Palestine, where he received some of his schooling.