Born in the UK in 1930 to Polish Jewish émigrés, Kaufman spent nearly all his life immersed in politics, standing for election at the age of 24 in 1955. 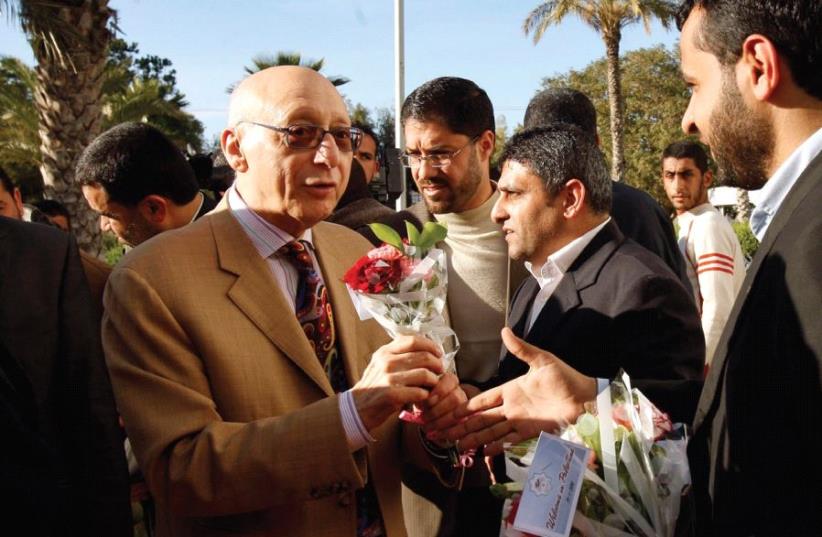 HAMAS LAWMAKERS welcome MP Gerald Kaufman upon his arrival at the Rafah border crossing in the southern Gaza Strip in 2010
(photo credit: REUTERS)
Advertisement
London – The death of Sir Gerald Kaufman, aged 86, the longest-serving MP in the British House of Commons, was announced Sunday evening by his family after what was described as a “long-term illness.”Born in the UK in 1930 to Polish Jewish émigrés, Kaufman spent nearly all his life immersed in politics, standing for election at the age of 24 in 1955. He was eventually elected in 1970 as an MP for Manchester in Northwest England, serving the city for the rest of his life in a parliamentary career of 47 uninterrupted years. As the Commons’s longest- serving member, he held the unofficial title “father of the House.”He served as a junior minister in the 1970s and then as shadow home secretary and shadow foreign secretary during the Labor Party’s years in opposition in the 1980s and early 1990s. During this period, he was perhaps most renowned for describing his party’s 1983 election manifesto (a year which saw Labor badly defeated by Margaret Thatcher’s Conservatives) as the “longest suicide note in history.”Paying tribute to Kaufman, Labor leader Jeremy Corbyn said: “Gerald came from a proud Jewish background. He always wanted to bring peace to the Middle East, and it was my pleasure to travel with him to many countries... I will deeply miss him, both for his political commitment and constant friendship.”Prime Minister Theresa May said Kaufman “spent more than half his life as a parliamentarian, having been first elected in 1970. As ‘father of the house,’ his wisdom and experience will be very much missed by MPs on all sides of the house.”Unrelenting in his opposition toward successive Israeli governments, Kaufman described the Jewish state as having become an “international pariah” because of Ariel Sharon’s leadership during Operation Defensive Shield in 2002. Though he grew up as a member of the Marxist-Zionist Poale Zion (now known in the UK as the Jewish Labor Movement), Kaufman was at many times criticized by those within British society and British Jewry for his views on Israel.In October 2015, Kaufman stated that many of the stabbing attacks at that time in Israel were “fabricated” and that “Jewish money, Jewish donations to the Conservative Party – as in the general election in May... bias the Conservatives,” resulting in fierce condemnation from the Board of Deputies, a Jewish organization, and the All-Party Parliamentary Group on Antisemitism.