The newly reelected French MP boasts of his connections to the Jewish state and its premier in the face of harsh criticism in France, which he says has to change its "anti-Israel line." 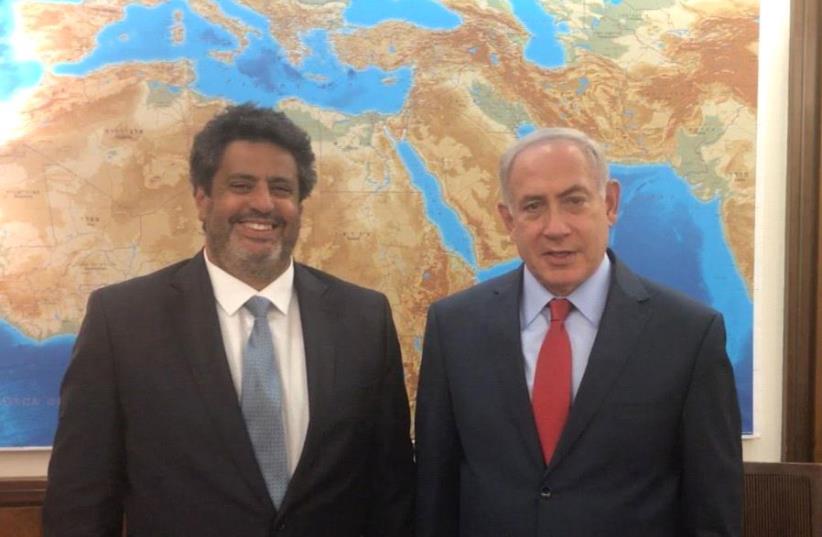 French MP Meyer Habib (L) and Prime Minister Benjamin Netanyahu
(photo credit: Courtesy)
Advertisement
Prime Minister Benjamin Netanyahu's confidant and newly reelected French MP Meyer Habib spoke this week in defense of his relationship with the Israeli prime minister as well as his strong ties to the Jewish world in response to what he deemed to be undue criticism from the French media. According to Habib, the French media was being hypocritical in its bashing of his long-standing friendship with Netanyahu, who also filmed an endorsement of the French MP's reelection. "It didn't bother anyone" when former US President Barack Obama and German Chancellor Angela Merkel backed French President Emmanuel Macron ahead of his election earlier this year, Habib noted. "They just reject everything connected to Judaism and Israel," he charged. "It's hard for them that they lost big-time." As for the critique about his strong focus on Israel-related issues, Habib, of the center-right UDI party, said: "I am everyone's MP whether they voted for me or not. I got very few votes in Turkey, only 7-8%, but I will be everyone’s MP, as I was for 4 years. But without erasing my beliefs.”Habib was responding to accusations by Florence Drory, who represented Macron's center-left En Marche! party, that he only deals with subjects pertaining to Israelis. Habib’s constituency includes French citizens in Cyprus, Greece, Israel, Italy, Malta, San Marino, the Holy See and Turkey, but Israel has more voters than all the other countries combined, and he got 88% of the vote in Israel.As for France's stance regarding the Jewish state under the leadership of Macron, Habib was cautious but hopeful about Macron and his relations with Israel. He said his UDI party will back Macron, but his personal support depends on Macron’s actions.“I hope they change the anti-Israel line of recent years and reverse their position in favor of dividing Jerusalem and their obsession with settlements,” he stated.Habib also hoped for a change in economic policy, coming out against “the socialist ways of recent years.”
Netanyahu endorses French candidate Meyer Habib (credit: FACEBOOK)
The MP plans to continue his focus on fighting antisemitism and delegitimization of Israel in France.Habib said radical Islam is “the greatest disease of the world,” and that “Israel is on the frontlines, fighting a war not about territory, but about values.”“Radical Islam killed 250 people in France in the last year-and-a-half,” he said. “I brought delegations to Israel to learn how to fight terror…it could have been worse.”This week Habib was at the center of controversy in France once more when he followed up his reelection in a video in which he could be seen thanking "the Almighty" and saying the 'shehechiyanu' blessing. And while in Israeli politics religious displays are par for the course – politicians thanking God at the Western Wall after a victory is a fairly common site – but in France, laïcité, or secularism, is the rule of the land.The video posted Sunday made a headline in L’Express. Habib, standing next to his family and a man in ultra-Orthodox garb, thanked his voters and then God, explaining the significance of the blessing he recited, to “thank the Creator that we arrived at such a moment.”Ahead of the vote, Le Monde dedicated an article to Habib’s religious ties, his appearance on stage at Sephardic Chief Rabbi Yitzhak Yosef’s weekly post-Shabbat Torah shiur. Yosef endorsed Habib, saying he fights anti-religious initiatives in France.Habib’s opponent, Drory, whom he had accused of being anti-religious and pro-Palestinian, called his rabbinical endorsements “not normal.”Habib said that despite the criticism, he would repeat the shehechiyanu blessing 1,000 times and is proud to be endorsed by rabbis, shrugging off his critics as the “caviar left” – the French version of a champagne socialist – “that is depressed by its loss.” “I am part of a secular state, but as a Jew, I have the full right to thank God,” he said. “A secular state means I have the choice to believe or not. That includes the option to believe. In the US, they say ‘God Bless America’ all the time.” According to Habib, “the caviar left have an obsession with anything having to do with God…They need to respect democracy…I am French and Jewish, and what protected the Jews for 2,000 years is Torah, mitzvahs and Shabbat. “Whoever doesn’t want to believe – that’s their full right, but they should give those who believe their full rights. My beliefs are personal,” he concluded.