According to police, the gunman approached the men from behind and shot both in the head at close range in the Ozone Park neighborhood. 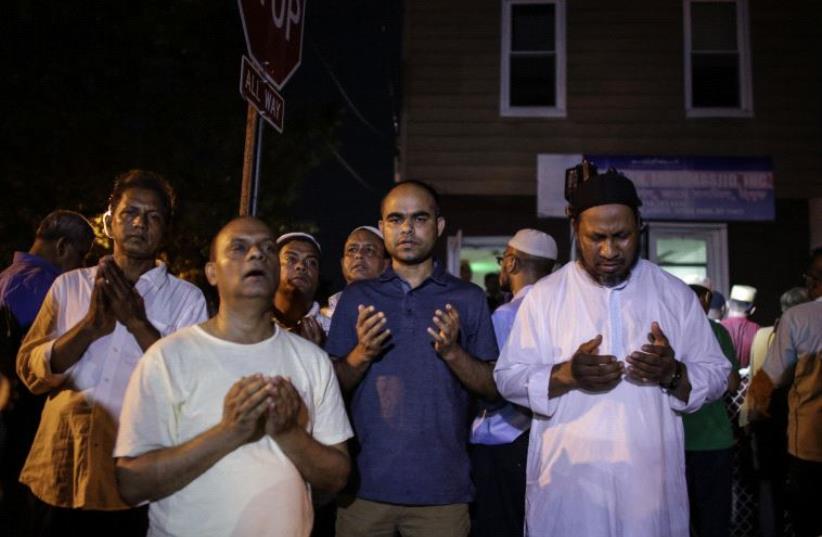 Community members pray outside the Al-Furqan Jame Mosque in Ozone Park after imam Maulama Akonjee and friend Thara Uddin were killed in the Queens borough of New York City
(photo credit: KENA BETANCUR / AFP)
Advertisement
NEW YORK - The Anti-Defamation League expressed solidarity with the Muslim community on Sunday after an imam and and another Muslim walking with him were fatally shot by a lone gunman. The double murder happened on Saturday following afternoon prayers at a mosque in the New York City borough of Queens.According to police, the gunman approached the men from behind and shot both in the head at close range in the Ozone Park neighborhood. No arrests have been made.While the motive for the shooting was not immediately known and no evidence has been uncovered that the two men were targeted because of their faith, some in the Muslim community have spoken out against Republican Presidential candidate Donald Trump, blaming him for creating an atmosphere of Islamophobia.The victims, identified as Imam Maulama Akonjee, 55, and Thara Uddin, 64, were both wearing religious garb at the time of shooting, police said.The ADL said it is shocked and horrified at the murder. ADL New York Regional Director Evan R. Bernstein also urged the NYPD to investigate it as a possible hate crime.“Unfortunately, such incidents have the potential to make communities feel unsafe and vulnerable,” he said. “However, the Muslim community should know that greater New York stands united with them during this extremely difficult time.”The Council on American-Islamic Relations, a Muslim civil rights and advocacy group known by the acronym CAIR, said Uddin was an associate of the imam."These were two very beloved people," Afaf Nasher, executive director of the New York chapter of CAIR, told Reuters. "There is a deep sense of mourning and an overwhelming cry for justice to be served.""We are calling for all people, of all faiths, to rally with compassion and with a sense of vigilance so that justice can be served," Nasher said. “You can’t go up to a person and shoot them in the head and not be motivated by hatred.”The suspect was seen by witnesses fleeing the scene with a gun in his hand, police said.Reuters contributed to this story.