NGO in antisemitism case: Giving JVP a seat and not Hillel is still discrimination

The Lawfare Project has brought a suit alleging discrimination and antisemitism against San Francisco State University. 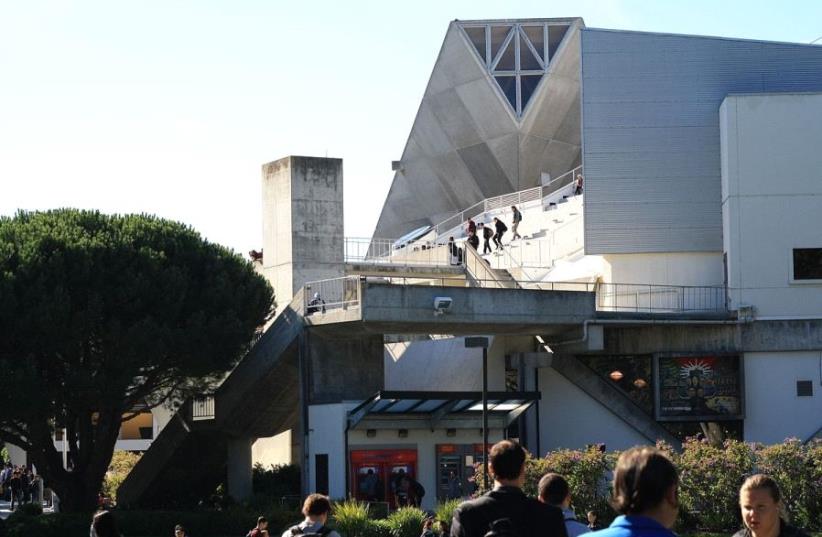 San Francisco State University - Cesar Chavez Student Center
(photo credit: WEBBI1987 BY CC BY-SA 3.0 / WIKIMEDIA COMMONS)
Advertisement
Giving only Jewish Voice for Peace a table at a student activities fair but not to Hillel is still invidious discrimination, an NGO told a US federal court in California, in an antisemitism lawsuit against San Francisco State University.The statement was made last week at the first hearing in the Lawfare Project’s case against the university for decades of alleged discrimination against Jews, but the full transcript of the hearing was only now released and obtained by The Jerusalem Post.The university denied the allegations and won a short-term tactical victory in getting the case temporarily dismissed, but the court said this was primarily to give Lawfare Project and university student plaintiffs an opportunity to amend their lawsuit.The amended lawsuit will focus on more serious and recent antisemitism grievances instead of the decades of incidents the original lawsuit mentioned.At its heart, the case asserts that the university violated its Jewish students’ right to free speech, freedom to assemble and right to have law enforcement protect these rights, as part of systematic discrimination or deliberate indifference to a hostile environment against Jews.Lawfare Project’s lawyer, Seth Weisburst of Winston & Strawn LLP, made the statement about discrimination against Hillel in responding to Northern California federal judge William Orrick’s question about how he could accuse the university of antisemitism at the student fair when JVP, a Jewish group, was given a table.Weisburst responded: “So this fair was set up... it was decided that Jewish students weren’t entitled to have a table… You mentioned the JVP group… To use an analogy… if a group of Chinese students were excluded” because of policies of the Chinese government, “that’s obviously invidious discrimination.”“And having a table of some cherry-picked people who will support your point of view and being able to point to them cannot be a way to avoid liability,” he continued.Another central question that Lawfare Project and the university will be expected to butt heads about when the amended lawsuit is filed is whether top officials simply knew that there was discrimination directed against Jewish students or whether they helped orchestrate it.This was the issue where Judge Orrick said Lawfare Project needed to be more specific and narrow its focus to where it had more concrete evidence.“We believe this is an orchestrated… series of events… they didn’t want to have the event [hosting Jerusalem Mayor Nir Barkat] happen… They decided to move it to a room that far fewer people would attend… they were ordered by the Dean of Students to tell the police to stand down and take no action, and that had the effect of… this speech being shut down… and nobody could hear the speech,” said Weisburst.Weisburst added that Professor Rabab Abdulhadi, Dean Begley, Dean Monteiro and other officials were also involved in acts of “retaliation” against Jewish students for their views and events they organized.The lawsuit was triggered following the alleged complicity of senior university administrators and police officers in the disruption of an April 2016 speech by Jerusalem Mayor Nir Barkat.During that event, organized by the university’s Hillel group, Jewish students and audience members were allegedly “subjected to genocidal and offensive chants and expletives by a raging mob that used bullhorns to intimidate and drown out the mayor’s speech and physically threaten and intimidate members of the mostly Jewish audience.”The lawsuit asserts that “campus police – including the chief – stood by, on order from senior university administrators who instructed the police to ‘stand down’ despite direct and implicit threats and violations of university codes governing campus conduct.”A JVP spokeswoman Tallie Ben Daniel rejected the Lawfare Project’s narrative in the case, stating: “Despite this lawsuit’s claims, this suit is not about protecting Jewish students from antisemitism, it is the latest in an ongoing effort to silence advocacy for Palestinian human rights on campuses.“‘Pro-Israel’ organizations have… attempted to dissolve a Memorandum of Understanding between An-Najah University in the occupied West Bank and SFSU; persecuted Palestinian professors, and publicly harassed Palestinian students, arguing for distinguishing between criticism of the Israeli government… policies towards Palestinians, and anti-Jewish sentiment.”